This vocational training program helps students set the stage for an exciting career behind the curtain in theater, concert, opera, television, film, corporate events, and more. Technical theater careers, many of which do not require a college education, are rewarding, take place in a variety of exciting job locations, and offer high-paying wages. Participants of the Backstage Pass program discover the ins and outs of each job, networking on their journey of learning to launch their careers and find future employment.

Over the course of this virtual program, students will meet industry professionals, virtually visit theaters and workshops, and build their skills through hands-on training sessions taught by industry professionals. Applicants will undergo an application and interview process to assess if Backstage Pass is the right fit for them, and participants will receive a stipend. 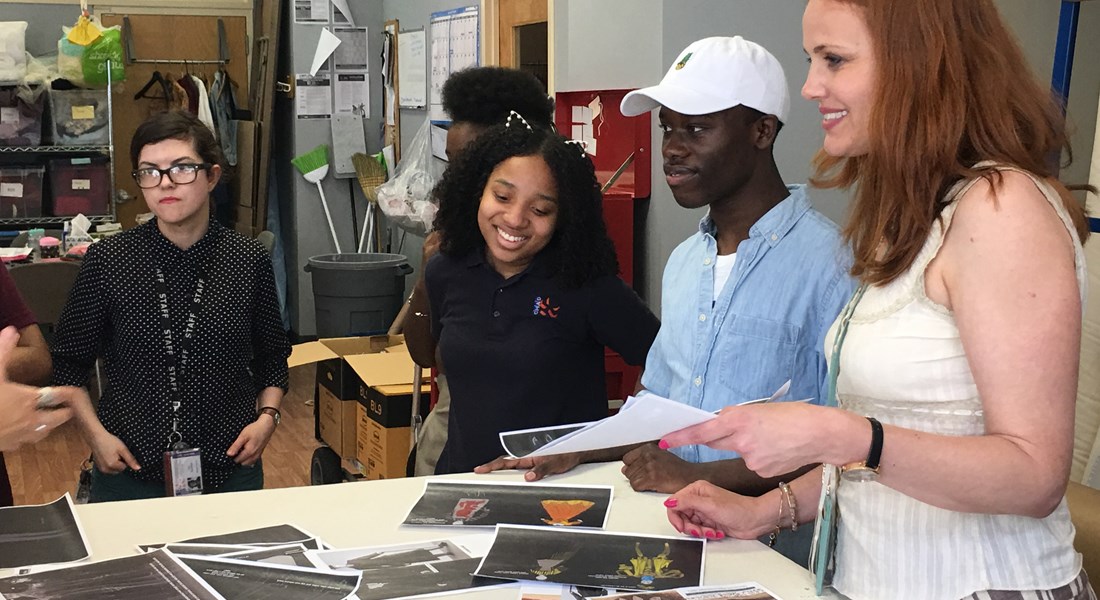 Lisa Anderson is the Production Stage Manager for Opera Philadelphia, a recent transplant from the West Coast where she worked as the Production Stage Manager, Stage Manager and Associate Video Director and Editor for San Francisco Opera for many years. Having worked on several of their new productions, including Dr. Atomic and Red Chamber, Lisa realized that is where her passion is, as well as the future of the art form. Because of their commitment to new works and outreach, Lisa and her husband moved here to allow her to work for Opera Philadelphia. Prior to that, working as a freelance Stage Manager, Lisa had the privilege of working for such companies as Lyric Opera of Chicago, Washington National Opera, and many other in the U.S., and in Europe, she took an off-Broadway show to Naples, Italy and was Acting Director for a show in Liege, Belgium. Lisa and her husband, Ben, are loving Philadelphia and the people here, but they would not mind having the San Francisco weather back.

Ali Blair Barwick has worked with properties, set, lighting, and sound departments in various theaters and venues in the tri-state area. Ali has also stage-managed productions in college and on a professional level. Ali loves the change of pace that freelancing has given her and have worked at a variety of venues, including: Academy of Music Philadelphia, Kimmel Center, Walnut Street Theater, and Wells Fargo Center. Ali has been a member of I.A.T.S.E. Local 8 since March 2014.

Jestis Deuerlein is co-owner of Done and Dusted, a special finishes company based in Philadelphia. Jestis has been creating special finishes, sets, and photo backdrops since 2006. Her clients include Free People, Anthropologie, Urban Outfitters, PREIT, Fluxus Philly, and the Franklin Flea. In 2014, Done and Dusted was born when Jestis decided to combined talents with Eliott Waters, a carpenter with 20 years experience on both residential and commercial sites. Eliott was formerly a professional photographer in London—creating the photo identities for brands such as Puma and Boxfresh and shooting fashion editorials for The Face, I-D, The Evening Standard and Dazed and Confused.

Hanna Gaffney is an actor, teaching artist, and makeup artist in the Philadelphia area. She received her BFA in Acting from the University of Wisconsin Stevens Point but now lives right in South Philadelphia. She teaches makeup classes at the Chester County Arts Association and the Fiddleheart Academy, as well as with Opera Philadelphia and has worked as a makeup artist with several companies including Rutgers University and the Community of Actors with Special Needs Theatre. She has worked as an actor with several companies throughout Philadelphia including Quintessence Theatre, 11th Hour Theatre, Resident Theatre Company, and People’s Light, and has been a supernumerary in several Opera Philadelphia productions. Hanna greatly enjoys teaching a multitude of classes for young people but particularly loves sharing her love of special effects makeup with students, and instilling them with the knowledge to create their own work.

Doug Greene is a Philadelphia based actor, designer, installation artist, and devised theater maker. Doug’s writings have been showcased at the Painted Bride with a performance and installation in Memento Mori, his contribution to their Secret Show Series. Doug has worked in various aspects of the theater include designing for Quintessence Theatre, directing Kyra Baker's Witness for First Person Arts, designing Revolution Shakespeare's Cymbeline, co-directing and conceiving Renegade's An Unpleasant Surprise at the Barnes Arboretum, and creating art installations at the Philadelphia Museum of Art in collaboration with the Bearded Ladies Color Me Barbara, to name a few.

Paul Hewitt is a member of IATSE Local 8, Philadelphia’s Stagehands Union. He has worked in every major theater, arena, stadium, and other performance venue in the Philadelphia region. He has been a member of the Pennsylvania Ballet crew since 1991, first as Assistant Stage Manager, then Flyman, and since 2016 as Head Carpenter. He has served as Technical Director and/or Head Carpenter for a number of other companies, most recently Philadelphia Theatre Company from 2014 – 2016. Paul was also Head Carpenter for Opera Philadelphia’s O17 and O18 Festival productions at the Barnes Foundation. During hiatuses in the Ballet season, he can often be found at the Walnut Street Theatre’s scene shop building scenery for their mainstage productions. Paul has an extensive background in education. He taught stagecraft at the Haverford School from 1994 to 2008. When Haverford’s sister school, Agnes Irwin, reorganized their technical theatre program in conjunction with the opening of a new performance venue on campus, Paul was asked to help establish and supervise that program. He filled that role from 2004 to 2008. He helps oversee Local 8’s very active education program as a member of the Education Committee and teaches Shop Carpentry classes to new and prospective members several times a year.

Alfreda “Fre” Howard (Faces By Fre,LLC) began her career as a Professional Makeup Artist in her hometown of Ypsilanti, Michigan 20 years ago. Her talents span from “Beauty to Bruises”. Fre and her team are consistently in demand as a Professional Makeup Artist and Makeup Artistry Business. Fre keeps herself busy designing makeup and hair for Curtis Opera Theatre, Temple University’s Opera Department, feature films, Netflix, Amazon Prime, and special events. Fre recently made her debut as makeup and wig designer for “Off Broadway” in spring 2019. She also designed wigs and makeup for a film in Los Angeles that has an opportunity to be recognized by the Academy Awards short film category. Fre's greatest strengths are; her professionalism, natural talent, friendly nature, Diversity in her skills, her winning personality and attention to detail. As an artist she is constantly researching the latest trends, learning new skills and techniques as well as participating in mentorship programs; helping young artists navigate the entertainment industry. Fre is a proud member of I.A.T.S.T.E Local 799, Local 798 and Local respectively.

Sara Marinich (she/they) is a Philadelphia based artist and stage manager. She is a teaching artist with Opera Philadelphia, The Wilma Theater, and previously alongside Curtis Institute Artist Year Fellows at South Philadelphia High School. She was the artistic fellow at The Wilma Theater for the 2018/19 season. Sara has worked with Opera Philadelphia, The Bearded Ladies Cabaret, Lightning Rod Special, Subcircle, Red 40 & The Last Groovement, and Ninth Planet. She is a graduate of The University of The Arts and is a member of The American Guild of Musical Artists. More at smarinich.com