One year after its sold-out world premiere and on the heels of a successful crowdfunding campaign, Opera Philadelphia presents an encore engagement for We Shall Not Be Moved, “a rare work in the genre to be created by artists of color” (New York Times), in a free broadcast as part of the company’s annual Opera on the Mall series at Independence National Historical Park.

Opera on the Mall: We Shall Not Be Moved, presented through PNC Arts Alive, takes place on Saturday, September 29, at 7:00 p.m. (pre-show at 6:00 p.m.). The broadcast is part of O18, Opera Philadelphia’s second annual fall festival featuring eleven days of operatic events all over the city from September 20-30. FREE tickets will be available to the public beginning on Wednesday, August 29, at 10:00 a.m. at operaonthemall.org.

To date, the Opera on the Mall series has attracted nearly 30,000 opera fans and newcomers to Philadelphia’s Independence National Historical Park, in the shadow of the Liberty Bell and Independence Hall. The setting, in the birthplace of our nation, will magnify one of the central questions posed by We Shall Not Be Moved, which asks: “For whom America the beautiful?” 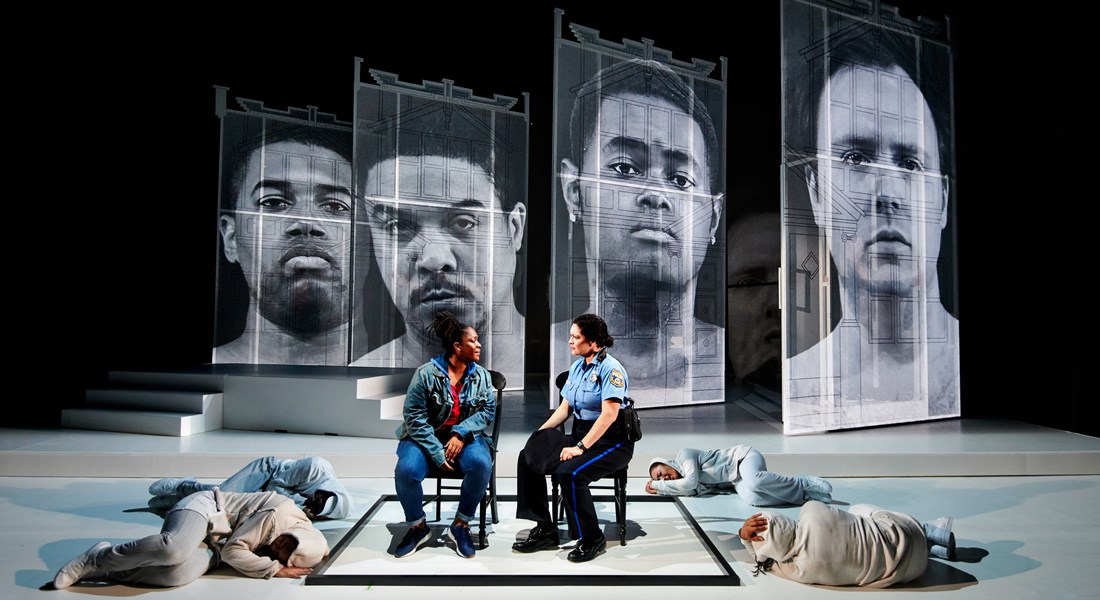 A scene from WE SHALL NOT BE MOVED, to be presented in a free broadcast on Sept. 29, 2018 Credit: Dave DiRentis

When it first played to seven sold-out Wilma Theater audiences during Opera Philadelphia’s inaugural festival, O17, Opera Philadelphia’s inaugural annual festival, the opera – a company commission from Daniel Bernard Roumain, Marc Bamuthi Joseph, and Bill T. Jones – was a hit with audiences and critics alike, being hailed as a “deeply moving” (Washington Post), “poignant and genre-bending” (Wall Street Journal), “highly polished piece of theater” (Philadelphia Inquirer). “One minute I was on the verge of tears,” said a local high-school student; “next minute I was on the edge of my seat.” As Opera News noted, with its “compelling score utilizing classical, jazz, music theater, hip-hop and dance music vocabulary,” We Shall Not Be Moved “succeeds on the level of art and not just polemic.”

Following its seven sold-out performances in Philadelphia, We Shall Not Be Moved went on to make warmly-welcomed New York and European debuts. The enthusiastic reception it received at Harlem’s Apollo Theater and Amsterdam’s Opera Forward Festival, where it was presented by Dutch National Opera, proved that this timely, Philadelphia-based work could also find relevance with the wider international community.

“The world premiere of We Shall Not Be Moved in Festival O17 was an example of how opera can tell our stories and create a dialogue on important issues like racism, gun violence, police brutality, and poverty,” said David B. Devan, General Director & President of Opera Philadelphia. “We are thrilled to bring We Shall Not Be Moved to Independence Mall in a free HD broadcast, and to share this important and powerful work with thousands of people who either could not afford to see it last year or could not get a ticket once it sold out. We are so very grateful to PNC Arts Alive, PECO, and the many generous individual donors who made this event possible.”

Opera on the Mall is presented through the John S. and James L. Knight Foundation and PNC Arts Alive. Opera Philadelphia has received dedicated funding for Opera on the Mall from PECO, Hamilton Family Charitable Trust, and dedicated gifts from individual donors, including the Mazzotti/Kelly Fund of the Philadelphia Foundation, Drs. Beverly Lange and Renato Baserga, and more than 200 individual donations to the company’s first-ever crowdfunding campaign through Kickstarter.

Event information is available at operaonthemall.org or by calling 215.732.8400.

About We Shall Not Be Moved

The poetic interdisciplinary chamber opera draws on the collective talents of Haitian-American composer Daniel Bernard Roumain, Haitian-American spoken word artist Marc Bamuthi Joseph, and peerless director, choreographer, and dramaturge Bill T. Jones. In a production that combines spoken word, contemporary dance, video projection, and classical, R&B and jazz singing with a brooding, often joyful score, they tell the story of five North Philadelphia teens on the run: a 15-year-old African-American girl and her self-selected “family” of four brothers – a black-identified white boy and three African-Americans, one of whom is transgender. Their confrontation with local police officer Glenda – herself a woman of color – rises from the enduring ashes of the Philadelphia police’s 1985 bombing of the MOVE compound in West Philadelphia, and raises timely questions about national identity, race, gender, the failure for some of the public education system, and personal responsibility.

Glenda’s confrontation with the teens rises from the radioactive ashes of one of the darkest hours in the history of the City of Brotherly Love. On May 13, 1985, now more than three decades ago, Philadelphia became “The City That Bombed Itself” when local police concluded a standoff with the radical MOVE group by dropping explosives onto the organization’s row-house headquarters, starting a fire that city officials then allowed to burn. The only police aerial bombing on U.S. soil to date, this unconscionable attack killed eleven African-American MOVE members, five of whom were children, and wiped out an entire residential neighborhood, leaving more than 250 people homeless.

“We really are trying to make characters that have specific locations and psyches, and we want to show those characters capable of evolving over time,” explained Bill T. Jones before the 2017 world premiere. “Un/Sung and Glenda are both from inner-city neighborhoods, but they’ve chosen different families. Glenda has gone for the route of law and order. She believes in civilization, that there can be a right way and a wrong way, and she’s been able in some ways to transcend what she thinks is her identity as a Latina in a racist society. When we first meet her, she is not nearly as conflicted as she should be about her role in the establishment order.”

Performance video of We Shall Not Be Moved was recorded in September 2017 by Reelblack, a Philadelphia film and video production company founded by award-winning filmmaker Michael Dennis and dedicated to creating and promoting “good movies ’bout Black Folks.”

About the John S. and James L. Knight Foundation

Knight Foundation is a national foundation with strong local roots. We invest in journalism, in the arts, and in the success of cities where brothers John S. and James L. Knight once published newspapers. Our goal is to foster informed and engaged communities, which we believe are essential for a healthy democracy."

Opera on the Mall: We Shall Not Be Moved is presented through PNC Arts Alive, a multi-year initiative of the PNC Foundation dedicated to supporting visual and performing arts groups with the goal of increasing arts access and engagement in new and innovative ways. The PNC Foundation, which receives its principal funding from The PNC Financial Services Group, actively supports organizations that provide services for the benefit of communities in which it has a significant presence. The foundation focuses its philanthropic mission on early childhood education and community and economic development, which includes the arts and culture. To date, through PNC Arts Alive approximately $13 million in grants have been awarded to enterprising cultural organizations in four regions served by PNC. For more information, visit www.pncartsalive.com.