With an Opera Philadelphia Residency, students can explore the magic of opera and create meaningful music together.

Spanning over the course of 10 weeks, the Residency Program energizes students around the performing arts – specifically opera – and empowers them to create, design, and perform an original opera of their own.

With a focus on social and emotional learning (SEL), the program allows students to grow in an inclusive environment. Students develop their abilities to understand emotions, show empathy, and maintain positive relationships as they work through an opera with their classmates.

“I have more confidence to speak with my classmates after [Opera]. [Opera] inspires us about being confident about the things we do.” 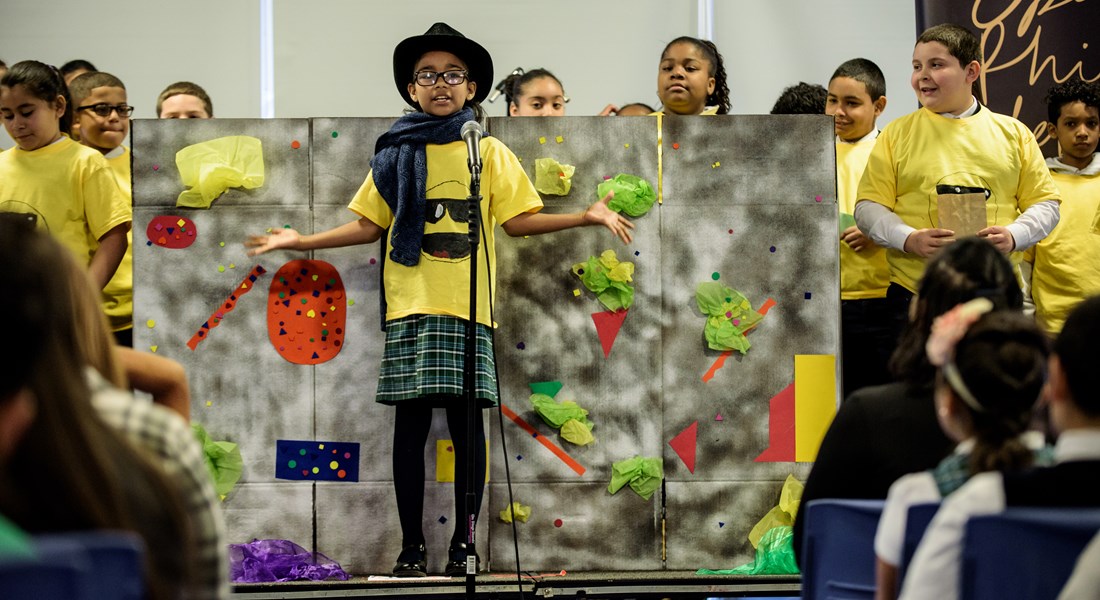 Curiosity in our world's stories lies at the heart of performance artist, Dicky's (they/she) work. Her collaborations with organizations like Aural Compass Projects, Wear Yellow Proudly, Bard College, Cincinnati Opera, and Arizona Opera have highlighted the importance of working toward equity and creative joy in herself and surrounding communities.

Recently they have collaborated with pianist, Michael Lewis, and soprano, Chelsea Fingal DeSouza in their self-produced recital, Before Body Meets Earth: a storytelling recital that embodies, through music new and old, two people's struggle to connect and their search for the empathy needed to do so. For this project, the Before Body Meets Earth team was proud to partner with the Newburgh LGBTQ Center to raise money for the Queer Relief Fund - a fundraiser developed to relieve financial strain in the Hudson Valley's queer communities.

Dicky has also been seen on stage with American mezzo-soprano Stephanie Blythe and pianist Craig Terry on a program of American music entitled “Sing Bard!” In 2019, they premiered Francine Trester's chamber opera, Keepers of the Light, at the Nahant Music Festival in Nahant, Massachusetts, and in the summer of 2018, they appeared in the ensemble of the US premiere of Another Brick in the Wall with Cincinnati Opera - an operatic adaptation of Pink Floyd’s heralded album/later-turned movie, The Wall.

As a lover of new music, she has premiered songs composed by partner and collaborator, Michael Lewis, on many occasions included their second self-produced recital, Living Scars: Songs of Trauma and Healing - a working recital whose purpose is to discuss and reflect cycles of trauma and healing in our personal lives through song and spoken word in collaboration with La Frontera - local Phoenix suicide prevention center - and Master Addiction and Certified Advanced Alcohol and Drug Counselor, Amy Morris.

Liz Filios is a Philadelphia-based actor, composer and teaching artist. She has taught music, voice and acting at Play On Philly, Abington Friends School, Urban Youth Advancement, The Waldron Academy, The Arden Theatre, Wilma Theater, Lantern Theatre, Theatre Horizon, Theatre Exile, the University of the Arts and in residency with the Bearded Ladies Cabaret.

A graduate of the Musical Theatre program at the University of Michigan, Liz also studied Opera in Florence, Italy, Voice and Speech at Canada's National Voice Intensive, Directing at Cape Town Opera Co in South Africa, and Gamelan at the Çudamani Summer Institute in Bali, Indonesia. She is a Barrymore award winning performer, an Independence Foundation Fellow, and a recipient of the F. Otto Haas Award for Emerging Theatre Artist.

Taylor Ott is a multi-disciplinary artist who focuses on Performance art and Fiber art. She was the Lead Teaching Artist and Education Associate with the New Orleans Opera Association where she also performed Granny/Mother in Little Red Riding Hood. Taylor has been recognized as an innovative teacher and producer bringing different arts and music together to create inclusive and diversified performances. In 2017 Taylor was the composer and lyricist of her original one act musical Ghost of a Chance that was presented at the New Orleans Infringe Fest. She has been featured in concerts of opera, song, cabaret, and musical theater in London, New York City and New Orleans and played roles such as: Susanna, Arminda, Mrs. Fiorentino, Belinda and more. She has a Masters of Music from Mannes and Bachelors from TrinityLaban, London. In her free time Taylor in part of a puppet duo called A Puppets Life.

Valentina Sierra (they/she) is a Colombian-American soprano and educator passionate about providing a space for musical cultivation and expression to students of intersecting identities. Before relocating to Philadelphia, Valentina taught as an English Teaching Assistant at secondary schools in Vienna, Austria as part of Fulbright Austria’s USTA program. Their operatic performance roles include Mélisande in Impressions de Pelléasand La Contessa cover in Le nozze di Figaro, both with Temple University Opera Theater. In concert, they have presented Viktor Ullmann’s Drei Jiddische Lieder at the MuseumsQuartier in Vienna and also formerly served as chorister for Minnesota-based chamber choir Border CrosSing.

Valentina earned her Bachelor of Music degree in Vocal Performance from the University of Minnesota and is currently pursuing a Master of Music degree from Temple University. During the 2022-2023 season, they will perform the role of Presendia in Nico Muhly’s Dark Sisters and will prepare a recital highlighting works of historically excluded composers.

Three-time district winner of the New York Metropolitan Opera National Council Auditions, Soprano Chabrelle Williams is a dynamic presence on the stage and an accomplished teaching artist. Currently, she is on Houston Grand Opera’s roster for teaching artistry and has also taken on a new role of curator for Opera Omaha’s “Amplifying the Black Experience” Series. Looking to the Fall and Winter, Chabrelle looks forward to starting a theater club at her former Elementary School and also making her debut at Carnegie Hall with the Oberlin Orchestra!

Chabrelle’s journey in the world of opera has brought her to several stages both in America and abroad. This season, she made several debuts: her Boston Lyric Opera debut as Milica in their film Svadba by Ana Sokolovic and directed by Shura Barishnykov, her Opera in the Heights debut as Leonora in their production of Il Trovatore and most recently made her Lincoln Center Theater Debut co-creating the leading role of Esther in the world premiere of the opera Intimate Apparel by Lynn Nottage and Ricky Ian Gordon directed by Bartlett Sher.

Throughout her journey, Chabrelle has not only premiered several works, but also been the pioneer for a couple training programs. She started the Artist Diploma program at Rice University and was the first to graduate of its program. Chabrelle also co-created the Holland Community Opera Fellowship at Opera Omaha where she used her experience as an artist and entrepreneur to creatively engage with various youth and adult organizations.

In addition to opera, Chabrelle also enjoys the more intimate experience of performing oratorio and art song. Some highlights in her concert repertoire include: the soprano solo in Verdi's Requiem with CityMusic Cleveland, the soprano solo in Mahler’s Fourth Symphony, and Exsultate Jubilate by Mozart.