If you're new to the opera or just need a little refresher, we've put together this slim primer of Operatic facts to help improve your enjoyment and understanding of our performances.

In the following sections we've covered the different vocal parts in the Opera, the role of the orchestra and at bottom you will find a glossary of common opera terms.

Did you ever wonder what the difference is between a soprano and a mezzo-soprano or what voice type can sing the lowest notes? Most opera singers fall into a voice type that reflects the singer's ability as well as the dramatic requirements of a particular role. *

So how does one categorize a soprano, mezzo-soprano, tenor, baritone, or bass, the five most common types of voices? It all depends upon one's vocal range, or the span from the lowest note to the highest note that a particular singer can produce. One's range one can sing is related to the size of the vocal chords and the speed at which they vibrate. Also taken into consideration when determining a singer's voice type are: the consistency of timbre (sound quality or color of the voice) and the ability to project the voice over a full orchestra -- remember, there are no microphones in opera, and there are small, medium/large and extra large voices.

Vocal range in order of lightest to heaviest

Typically a voice with a very high range with the ability to sing complicated passages with great agility.

A heavy, powerful voice with a steely timbre.

A somewhat more powerful voice than that of a true lyric.

The upper part of a voice, more often used in reference to male voices. 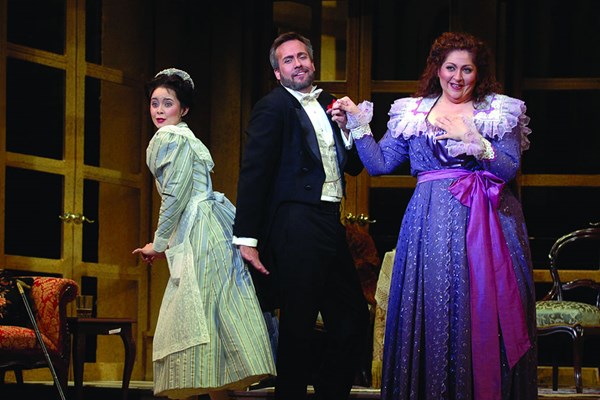 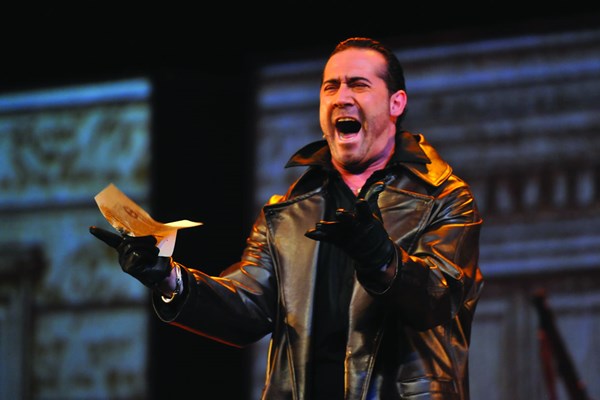 For females, the highest voice type is the soprano. In operatic drama, the soprano is almost always the heroine because she projects innocence and youth. Within this category, there are other sub-divisions such as, coloratura soprano, lyric soprano, and dramatic soprano. Some of the roles sung by these voice types include: Mimi in La bohème (lyric) and Ariadne in Ariadne auf Naxos (dramatic).

The mezzo-soprano has a lower range than the soprano. Many mezzo-sopranos sing the so-called "trouser" roles, portraying young boys or men. They can also be the villainesses or motherly types. This category is also sub-divided into coloratura mezzo, dramatic mezzo, and lyric mezzo. One of the most well known roles for a dramatic mezzo is the fiery gypsy Carmen in the opera of the same name.

The contralto or alto is the lowest female voice and the darkest in timbre. This voice type is usually reserved for specialty roles like the earth goddess Erda in Richard Wagner's Nordic fantasy-epic The Ring of the Nibelung. Since this is such a rare voice type, dramatic mezzos often sing roles in this range. Marian Anderson, a Philadelphia native, was one of the world's most famous contraltos ever.

For males, the tenor is generally considered to be the highest male voice in an opera, and is most often the hero or the love interest of the story. There are many different types of tenor voices. Two of the more common ones are lyric tenors, whose voices have high, bright tones, and dramatic tenors whose voices have a darker sound with a ringing quality in the upper range. Some of the more famous roles for tenors include Rodolfo in La bohème (lyric) and Radames in Aida (dramatic).

A countertenor is able to sing even higher than a tenor. This voice actually falls within a female's voice range. Through the use of a man's falsetto voice, the voice produces a sound that is sometimes described as "otherworldly".

A baritone is the most common type of male voice whose range lies midway between the high tenor voice and the low bass voice. In comedic operas, he is often the leader of the funny business, but he can also be the hero, who sacrifices himself for the tenor or soprano, or the villain. This voice has a dramatic quality capable of producing rich, dark tones. The hunchback court jester in the title role in Rigoletto (dramatic) and the popular Toréador Escamillo in Carmen are favorite roles for baritones.

In general, a bass is the lowest and darkest of the male voices and is ideal for several types of roles. The word bass comes from the Italian word basso, which means low. Some singers in this category are referred to as bass-baritones because they have voices that range between the bass and the baritone voice. A basso serio or basso profondo portrays characters who convey wisdom or nobility such as Sarastro in The Magic Flute. In contrast, a basso buffo sings comedic roles such as Dr. Bartolo in The Barber of Seville.

The orchestra is very important to the opera, mainly because it provides the singers with a cushion of sound to sing over, while at the same time being independent and equal in importance. The orchestra used for opera is a lot like a symphony orchestra, with four instrumental families and other various instruments. Each instrument family has instruments that sound in four different categories, much like voices. Those four main categories are soprano, alto, tenor, and bass. **

The conductor, or maestro, has many responsibilities. He or she stands in the pit, in front of the orchestra, and ensures that the opera progresses as it is supposed to. The conductor is in charge of keeping the music in balance by making sure that the orchestra doesn't drown out the singers, and vice versa. The orchestra must also have a certain blend, with each instrument getting equal representation during the opera, and the conductor is in charge of that as well. The conductor also must make sure that the tempo, or speed of the music, does not rush or drag, and must cue the singers before they begin their piece. In some opera houses, video screens are placed around the stage and other places and show the conductor cueing the singers, so they will not have to look down at the pit so often.

Accelerando
an acceleration or speeding up of the tempo of a particular aria, chorus or ensemble.

Act
one of the main divisions of a play or opera.

Alliteration
repetition of the same sound or letter at the beginning of words.

Archetypal
the original model or form, after which other things are modeled.

Aria
an operatic song for one voice.

Ascending
a series of notes going from a low to a high pitch.

Aside
a secret comment from an actor or singer directly to the audience that the other characters cannot hear.

Bar
a division of music containing a set number of beats.

Baritone
the range of the male voice between tenor and bass.

Beat
the basic pulse of a piece of music.

Chord
a group of notes played at the same time in harmony.

Choreography
the act of setting movement to music to create a dance.

Chorus
1. a group of singers. 2. a piece of music for these.

Coloratura
1. runs, trills, and other florid decorations in vocal music. 2. a singer who specializes in such music.

Composer
the person who writes the music.

Composition
a work of music, literature, or art.

Concerto
a musical composition for one or more solo instruments and an orchestra.

Conductor
the leader of the orchestra sometimes called maestro.

Countertenor
a countertenor voice is that of a male contralto, frequently with men singing in their falsetto range.

Crescendo
a build in the volume or dynamic of the music.

Designer
the person who creates the lighting, costumes or sets.

Director
the person who instructs the singer-actors in their movements on-stage and in the interpretation of their roles.

Ensemble
two or more people singing at the same time, or the music written for such a group.

Fairytale
a story (as for children) involving fantastic forces and beings. (such as fairies, wizards, and goblins)

Flat
a half-step lower than the corresponding note or key of natural pitch.

Harmony
two or more notes played at the same time; in other words harmony deals with chords, simultaneous sounds, and counterpoint with melody set against melody.

Hero or heroine
the principle character at the center of the story who struggles throughout the story, but generally triumphs in some manner at the story's conclusion.

Interlude
a short piece of instrumental music played between scenes or acts.

Key
the basic note of the main scale used in a piece of music. In the key of g, for example, g is the fundamental note; the music often returns to it and comes to rest on it.

Libretto
the words of an opera or other long musical.

Lyrics
the sung words or text of a musical comedy or operetta song.

Libretto
the words of an opera or other long musical.

Lyrics
the sung words or text of a musical comedy or operetta song.

Natural
a note that is neither flattened nor sharpened.

Octave
a note that sounds twice as high in pitch as another, is an octave above the other note, and has the sameletter naming it.

Opera
a play in which the words are sung to musical accompaniment.

Opus
a musical composition numbered as one of a composer's works (usually in order of publication).

Orchestration
the art of writing for the orchestra and deciding what instruments should play which parts of the music.

Overture
an orchestral composition forming a prelude to an opera or ballet.

Piano
1. a musical term meaning softly. 2. keyed percussion instrument first named pianoforte because it could play both softly and loudly.

Pitch
the highness/lowness of a sound or tone.

Principal
a major singing role, or the singer who performs such a role.

Quartet
music that is written for four musicians.

Range
how high and low an instrument can play.

Recitative
a narrative or conversational part of an opera, sung in a rhythm imitating that of ordinary speech.

Rehearsal
a session of practice for a performance.

Reprise
a return to an original theme.

Rhythm
the arrangement of notes according to their relative length and relative emphasis (beat).

Ritard
a slowing in the tempo of a piece of music.

Scale
a series of notes arranged in descending or ascending order of pitch.

Score
the written music of an opera or other musical work.

Semitone
a half step or half tone, an interval midway between two whole tones.

Sharp
any note a semitone higher than another note. also, slightly too high in pitch.

Solo
playing or singing alone, as a featured performer.

Sonata
a musical composition for one instrument or two, usually with three or four movements.

Tempo
the speed of the music.

Tone
1. an interval equal to two semitones. 2. the sound quality of an instrument or voice.

Tutti
all, meaning that everyone should play or sing together.

Underscore
music that is played softly underneath other action, usually characters talking.

Verismo
a school of opera in Italy that emphasized realistic plots and characters in opera.

Villain
a character in a story (or play/musical) that is pitted against the hero and is generally depicted as evil or wicked.

* By Barbara D. Mills
** Used with permission from the San Francisco Opera Guild