Having commissioned or co-commissioned more than 15 new works since 2011, Opera Philadelphia is recognized as “one of North America’s premiere generators of valid new operas” (Opera News). With the forthcoming launch of the Opera Philadelphia Channel, a global streaming platform where artists can perform and explore, the company has commissioned four of today’s most dynamic composers to create and premiere new works to be streamed on the channel.

The first premiere, slated for January 2021, will be composed by Opera Philadelphia Composer in Residence Tyshawn Sorey, the Newark-born multi-instrumentalist and composer celebrated for his incomparable virtuosity, effortless mastery and memorization of highly complex scores, and an extraordinary ability to blend composition and improvisation in his work. Subsequent premieres will be composed by Courtney Bryan, “a pianist and composer of panoramic interests” (New York Times), whose music is in conversation with various musical genres, including jazz and other types of experimental music, as well as traditional gospel, spirituals, and hymns; Puerto Rican-born composer and multi-instrumentalist Angélica Negrón, who writes music for accordions, robotic instruments, toys, and electronics as well as for chamber ensembles, orchestras, and choir; and Caroline Shaw, a New York-based musician—vocalist, violinist, composer, and producer—who performs in solo and collaborative projects. She was the youngest recipient of the Pulitzer Prize for Music in 2013 for Partita for 8 Voices, written for the Grammy-winning Roomful of Teeth, of which she is a member.

“We are thrilled to bring audiences together with these four incredible composers to continue to explore the creative process and the future of opera,” said David B. Devan, General Director & President of Opera Philadelphia. “As we explore and create for the digital stage, I cannot think of four more distinctive artists to lead the way.”

“We are excited to work with Tyshawn, Courtney, Angélica, and Caroline to create something new for the digital space,” said New Works Administrator Sarah Williams. "This is an opportunity to build upon our exploratory and innovative practice by commissioning these four creative composers who will work with a small ensemble of extraordinary artists to bring new music to our screens. We know our attention span has changed in the digital age, so they will create short, visual vignettes that play into that, all the while celebrating a sound world unique to each of them." 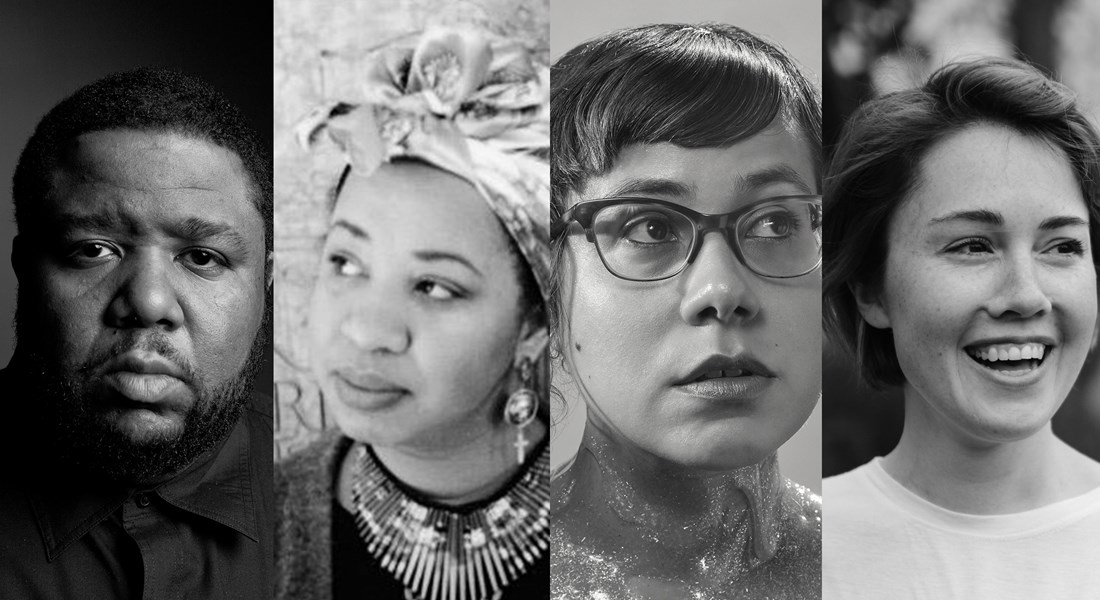 Tyshawn Sorey is described as “a composer of radical and seemingly boundless ideas” (The Wall Street Journal). He began his residency with Opera Philadelphia in November 2019 and is currently Presidential Assistant Professor of Music at the University of Pennsylvania. He collaborated with lyricist Terrance Hayes on a song cycle for tenor Lawrence Brownlee, Cycles of My Being, which premiered at Opera Philadelphia in February 2018 and will receive a digital premiere on the Opera Philadelphia Channel in November 2020. Sorey has performed nationally and internationally with his own ensembles, as well as artists such as John Zorn, Vijay Iyer, Roscoe Mitchell, Muhal Richard Abrams, Wadada Leo Smith, Marilyn Crispell, George Lewis, Claire Chase, Steve Lehman, Jason Moran, Evan Parker, Anthony Braxton, and Myra Melford, among many others.

He has composed works for the Los Angeles Philharmonic, the International Contemporary Ensemble, soprano Julia Bullock, PRISM Quartet, JACK Quartet, TAK Ensemble, the McGill-McHale Trio, bass-baritone Davóne Tines, Alarm Will Sound, the Louisville Orchestra, as well as for countless collaborative performers. His music has been performed in notable venues such as the Walt Disney Concert Hall, the John F. Kennedy Center for the Performing Arts, the Village Vanguard, the Ojai Music Festival, the Newport Jazz Festival, the Kimmel Center, and the Mostly Mozart Festival at Lincoln Center. Sorey has received support for his creative projects from The Jerome Foundation, The Shifting Foundation, Van Lier Fellowship, and was named a 2017 MacArthur fellow and a 2018 United States Artists Fellow.

Sorey has released twelve critically acclaimed recordings that feature his work as a composer, co-composer, improviser, multi-instrumentalist, and conceptualist. His latest release, Pillars (Firehouse 12 Records, 2018), has been praised by Rolling Stone as “an immersive soundworld… sprawling, mysterious… thrilling” and has been named as one of BBC Radio 3’s Late Junction 2018 albums of the year.

Courtney Bryan has academic degrees from Oberlin Conservatory (BM), Rutgers University (MM), and Columbia University (DMA) with advisor George Lewis, and completed postdoctoral studies in the Department of African American Studies at Princeton University. Bryan is currently the Albert and Linda Mintz Professor of Music at Newcomb College in the School of Liberal Arts, Tulane University. She was the 2018 music recipient of the Herb Alpert Award in the Arts, a 2019 Bard College Freehand Fellow, a 2019-20 recipient of the Samuel Barber Rome Prize in Music Composition and is currently a recipient of a 2020-21 Civitella Ranieri Fellowship, and a 2020 United States Artists Fellow.

Angélica Negrón’s music has been described as “wistfully idiosyncratic and contemplative” (WQXR/Q2) while the New York Times noted her “capacity to surprise.” Negrón has been commissioned by the Bang on a Can All-Stars, Kronos Quartet, loadbang, MATA Festival, Brooklyn Youth Chorus, Sō Percussion, the American Composers Orchestra, and the New York Botanical Garden, among others. Upcoming premieres include works for the LA Philharmonic, Dallas Symphony Orchestra and National Symphony Orchestra, San Francisco Girls Chorus, and NY Philharmonic Project 19 initiative.

Angélica is a teaching artist for New York Philharmonic's Very Young Composers Program working with young learners on creative composition projects and continues to perform and compose for film.

Caroline Shaw’s recent commissions include new works for Renée Fleming with Inon Barnatan, Dawn Upshaw with Sō Percussion and Gil Kalish, the Orchestra of St. Luke’s with John Lithgow, the Dover Quartet, TENET, The Crossing, the Mendelssohn Club of Philadelphia, the Calidore Quartet, Brooklyn Rider, the Baltimore Symphony, and Roomful of Teeth with A Far Cry. The 2018-19 season will see premieres by pianist Jonathan Biss with the Seattle Symphony, Anne Sofie von Otter with Philharmonia Baroque, the LA Philharmonic, and Juilliard 415. Caroline’s film scores include Erica Fae’s To Keep the Light and Josephine Decker’s Madeline’s Madeline as well as the upcoming short 8th Year of the Emergency by Maureen Towey. She has produced for Kanye West (The Life of Pablo; Ye) and Nas (NASIR), and has contributed to records by The National, and by Arcade Fire’s Richard Reed Parry. Once she got to sing in three-part harmony with Sara Bareilles and Ben Folds at the Kennedy Center, and that was pretty much the bees’ knees and elbows. Caroline has studied at Rice, Yale, and Princeton, currently teaches at NYU, and is a Creative Associate at the Juilliard School. She has held residencies at Dumbarton Oaks, the Banff Centre, Music on Main, and the Vail Dance Festival. Caroline loves the color yellow, otters, Beethoven opus 74, Mozart opera, Kinhaven, the smell of rosemary, and the sound of a janky mandolin.

Launching in October 2020, the Opera Philadelphia Channel will create a digital space in which artists can perform and explore, through a series of new commissions by visionary composers and dynamic performances produced for the screen. Annual subscriptions priced at $99 will be offered along with pay-per-view options for individual performances. The channel will be available for viewing on computers and mobile devices, and on TV screens via Chromecast and the Opera Philadelphia Channel app on AppleTV, Android TV, Roku, and Amazon FireTV. For more information, visit operaphila.org.