The company will broadcast new presentations of David T. Little’s Soldier Songs and Hans Werner Henze’s El Cimarrón; performances starring tenor Lawrence Brownlee, including Cycles of My Being by Composer in Residence Tyshawn Sorey; and new digital operatic premieres throughout the season, all filmed for the screen.

Opera Philadelphia plans to return to the Academy of Music in spring 2021 with performances of Puccini’s Tosca.

When Opera Philadelphia launched its annual Festival O in 2017, the packed calendar of operas ranging from the classic to the contemporary, suitable for binging in a weekend, was described as the “Netflix of opera." With the Covid-19 pandemic forcing companies away from gathering large audiences in theaters, the company is taking its next step into the future of the art form with the launch of the Opera Philadelphia Channel, a global broadcast platform that will bring a revised 2020-2021 season into opera lovers’ homes via their television screens and streaming devices.

Launching in fall 2020, the Opera Philadelphia Channel will create a digital space in which artists can perform and explore, through a series of new commissions by visionary composers and dynamic performances produced for the screen. Annual subscriptions priced at $99 will be offered along with pay-per-view options for individual performances. The channel will be available for viewing on computers and mobile devices, and on TV screens via Chromecast and the Opera Philadelphia Channel app on AppleTV, Android TV, Roku, and Amazon FireTV.

“Guided by the current global health pandemic and recommendations from city and state health experts, Opera Philadelphia is committed to safely engaging with our audiences, artists, musicians, staff, and our community,” said David B. Devan, General Director & President of Opera Philadelphia. “We have made the difficult but necessary decision to cancel Festival O20 and postpone many of the operas and events planned for our theaters, but we are thrilled to reimagine much of the proposed season, and expand it with new offerings, to be delivered to homes across the world via the Opera Philadelphia Channel. I am so thankful for the leadership provided by our company’s Board of Directors and to the staff of Opera Philadelphia for creatively adapting to this moment in our history. Through the broadcasts of these new performances and a robust series of roundtable conversations, lectures, panel discussions, and educational programming, we aim to create a space of inclusivity and belonging among people in the city of Philadelphia and opera lovers across the globe.”

Superstar tenor Lawrence Brownlee, who serves as Opera Philadelphia’s Artistic Advisor and had been scheduled to perform in residency as part of Festival O20, will launch the broadcast season with two filmed concerts. In “Lawrence Brownlee & Friends in Philadelphia,” Brownlee and a diverse lineup of guest artists will perform some of their favorite repertoire, resulting in a dynamic combination of arias, songs, and spirituals, showcasing the virtuosic range of the artists. Brownlee will also lead the broadcast premiere of Cycles of My Being, a song cycle that centers on what it means to be a Black man living in America today. Composed by multi-instrumentalist Tyshawn Sorey, who is currently Opera Philadelphia’s Composer in Residence, with lyrics by the award-winning poet Terrance Hayes, both of whom are MacArthur “genius grant” winners, the song cycle received its world premiere with the company in 2018. 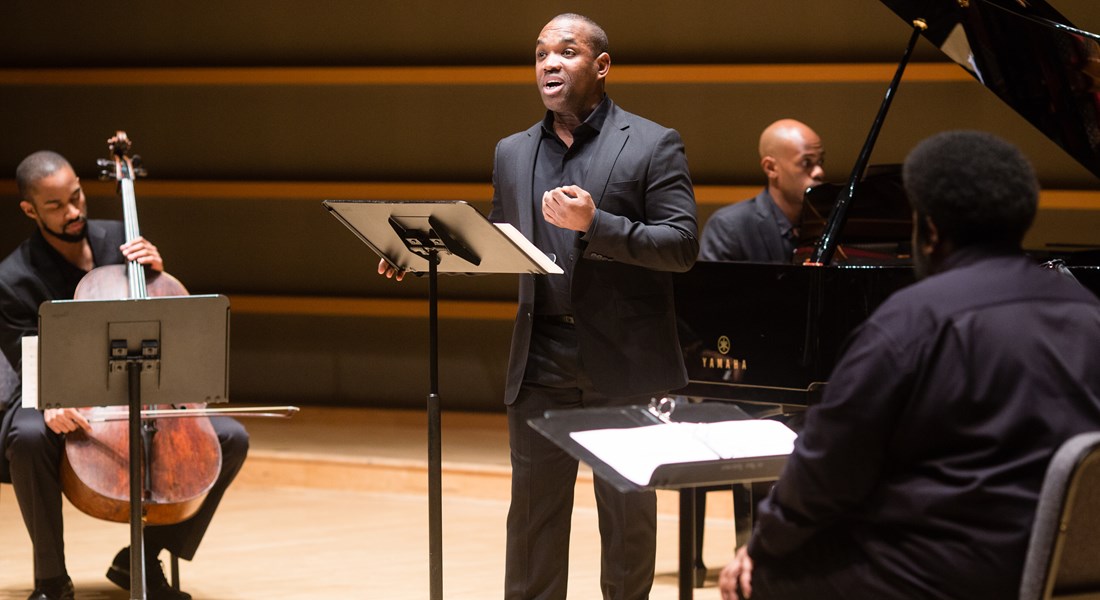 “The ideas, themes and experiences that make up Cycles of My Being have been on my mind for quite some time,” Brownlee said. “As I’ve watched men of color endure undeserved aggression, incarceration, brutality, and even death, I’ve been forced to consider my thoughts and questions around what it means to be a Black man in America today, and how we as a people are viewed and treated.”

A new production of Hans Werner Henze’s El Cimarrón, originally scheduled for Festival O20 at the Barnes Foundation, will be reimagined as a cinematic experience starring bass-baritone Sir Willard White. The company will also present a new production of Soldier Songs from composer David T. Little, starring baritone Johnathan McCullough and conducted by Maestro Corrado Rovaris. A series of four short new digital works commissioned from some of today’s most dynamic composers will be released throughout the season, and the channel will also broadcast a beloved production of Verdi’s La traviata featuring the acclaimed role debut of soprano Lisette Oropesa as Violetta. Additional information on all programs will be announced in the fall. 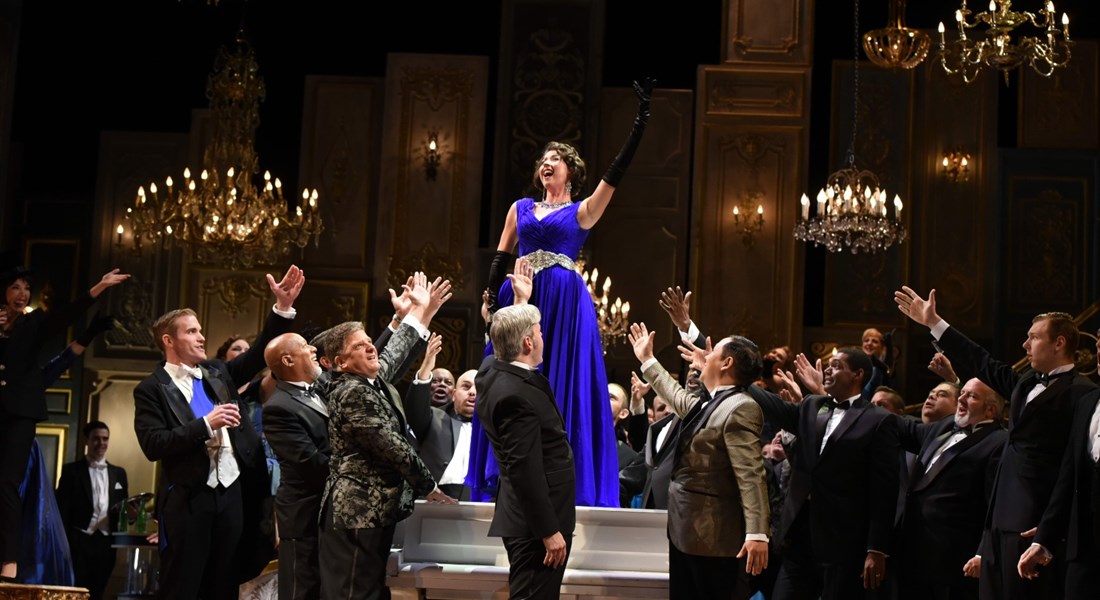 In launching the Opera Philadelphia Channel, the company has also announced plans to postpone several theatrical productions scheduled for the 2020-2021 season. A new Academy of Music production of Verdi’s Macbeth from renowned Scottish director Paul Curran and featuring soprano Sondra Radvanovsky’s role debut as Lady Macbeth has been rescheduled to September 2023 as part of Festival O23. The Perelman Theater world premiere of Woman with Eyes Closed, by Grammy-winning composer Jennifer Higdon and librettist Jerre Dye, is rescheduled to September 2021 as part of Festival O21. The January 2021 concert performances of Stravinsky’s Oedipus Rex, led by conductor Robert Spano in his Opera Philadelphia debut, are postponed to winter 2022. Four planned Festival O20 recitals featuring singers from the Curtis Institute of Music and the Academy of Vocal Arts will be postponed to Festival O21.

The company plans to draw its season to a close in May 2021 as scheduled with Puccini’s great verismo melodrama Tosca at the Academy of Music. The production features a first-rate international cast, with Grammy-winning Puerto Rican soprano Ana María Martínez inher company and title role debuts as Puccini’s troubled heroine. She sings opposite Italian tenor Piero Pretti, who makes his company debut as Tosca’s doomed lover, the painter Cavaradossi, and baritone Quinn Kelsey in his company and role debuts as the treacherous Baron Scarpia.

Subscribers and ticketholders for any of the postponed theatrical productions have been contacted by Guest Services to discuss options, including applying the value of their tickets to an Opera Philadelphia Channel subscription or a future production, donating all or a portion of the value to support the company, and refunds.

Annual subscriptions for the Opera Philadelphia Channel are now on sale at operaphila.org or by calling Guest Services at 215.732.8400. Individual pay-per-view purchase options will go on sale in September.

Opera Philadelphia Artistic Advisor Lawrence Brownlee, recently called “one of this generation’s greatest tenors” by ABC News, curates a program of arias, songs, and spirituals with a diverse lineup of guest singers, interspersed with brief conversations between Brownlee and the other artists.

In October 2015, rising soprano Lisette Oropesa made her role debut as Violetta in a new production of Verdi’s La traviata at the Academy of Music, serving notice that this would be one of the definitive roles of her career. “To judge from her first attempt at the role, Lisette Oropesa bids fair to be among its great exponents in her generation,” wrote David Shengold in Opera News.

Oropesa has gone on to perform the role at some of the world’s largest opera houses, including what the New York Times called a “star-making” turn at the Metropolitan Opera in February 2020.

In a special look back, Opera Philadelphia presents the broadcast premiere of Paul Curran’s renowned production, called “an impressive high-water mark.” The broadcast will feature an interview with Oropesa conducted by Opera Philadelphia Artistic Advisor Lawrence Brownlee, looking back on the five-year anniversary of the production co-starring tenor Alek Shrader (Alfredo) and baritone Stephen Powell (Germont).

Cycles of My Being
November 2020

Cycles of My Being, a co-commission with Carnegie Hall and Lyric Opera of Chicago, had its world premiere on February 20, 2018 in Philadelphia with tenor Lawrence Brownlee and conducted by the composer, Tyshawn Sorey. The San Francisco Chronicle called the song cycle “a work of both anguish and optimism, at once accusatory and stirring...whose traversal feels like a descent into a maelstrom followed by the emergence out the other side.”

“These are divided times, but the goal of Cycles of My Being is neither to widen those rifts, nor to re-open old wounds,” Brownlee said. “The goal is foster mutual respect, understanding, and communication across races and generations. History unfolds in cycles, and with this work, we hope to balance the stark challenges of our present reality with a resolute resilience, and an unwavering hope for a better future.”

Composer and librettist David T. Little, who served as Opera Philadelphia composer in residence from 2014-2016, premiered Soldier Songs in 2011. Based on interviews with veterans of five wars, the piece combines elements of theater, opera, rock-infused concert music, and animation to explore the perceptions versus the realities of the Soldier, the exploration of loss and exploitation of innocence, and the difficulty of expressing the truth of war.

“I first met Johnathan McCullough through Opera Philadelphia, where he was an Emerging Artist and I was Composer in Residence, and I was immediately struck not only by his artistry and intelligence, but also his fearlessness as a performer,” Little said. “So needless to say, when he approached me last year with an idea for a new production of Soldier Songs, I was on board. It means a lot to be returning to the ever-innovative Opera Philadelphia to make this new made-for-screen version; a company where I spent three years investigating what opera can be, and that always feels like home.”

Called “a baritone of solid accomplishment” by Opera Today, Johnathan McCullough is a graduate of Philadelphia’s Curtis Institute of Music and Opera Philadelphia’s Emerging Artist Program, and performed in the company’s productions of Bizet’s Carmen, Britten’s A Midsummer Night’s Dream, and the 2017 world premiere of Elizabeth Cree by Kevin Puts and Mark Campbell.

“My grandfather was a WWII veteran and was lucky enough to return home, but not all are as fortunate,” McCullough said. “Many who are welcomed back to our shores carry with them the tolls of war, both physical and psychological, for the remainder of their lives. This new production of David T. Little’s powerful Soldier Songs sets out to share with its audience the personal reality that many veterans live every day.”

Having commissioned or co-commissioned more than 15 new works since 2011, Opera Philadelphia is recognized as “one of North America’s premiere generators of valid new operas” (Opera News). In the 2020-2021 season, the company will commission and premiere four new digital works from some of today’s most dynamic composers.

“We are excited to create something new for the digital space,” said New Works Administrator Sarah Williams.  "This is an opportunity to build upon our exploratory and innovative practice by commissioning four composers who will work with a small ensemble of extraordinary artists. We know our attention span has changed in the digital age, so they will create short, visual vignettes that play into that, all the while celebrating a sound world unique to each of them."

Commissioned composers and additional details on the projects will be announced in the fall.

With the grandeur of an epic poem, Hans Werner Henze’s 75-minute drama, El Cimarrón (The Runaway Slave), tells the story of Esteban Montejo, a Cuban born into slavery in 1860 who, as a young man, escaped bondage on a sugar plantation, survived in the jungle, fought for Cuban independence from Spain, and lived to describe it all before dying at the age of 113. The work is a tour-de-force for four musicians – baritone, flute, guitar and percussion – all of whom are also called upon to play percussion throughout.

About Opera Philadelphia
Opera Philadelphia, the only American finalist for both the 2016 International Opera Award for Best Opera Company and the 2020 International Opera Award for Best Festival, is “the very model of a modern opera company” (Washington Post). Committed to developing opera for the 21st century, the company is recognized as “a hotbed of operatic innovation” (New York Times). For more information, visit operaphila.org.