The last time Opera Philadelphia’s gathered audiences on the Kimmel Cultural Campus was January 2020, for a concert of Verdi’s Requiem led by Jack Mulroney Music Director Corrado Rovaris. That event, gathering nearly 200 musicians from the Opera Philadelphia Orchestra and Chorus on stage, was praised for its “carefully integrated, cumulative sound” (Philadelphia Inquirer) and was a highlight of a season cut short by the COVID-19 pandemic.

Rovaris will marshal the company’s musical forces once again on Friday, Jan. 21 at 8:00 p.m. and Sunday, Jan. 23, at 2:00 p.m., this time in the company’s concert debut in Verizon Hall at the Kimmel Center, for a program featuring Igor Stravinsky’s Oedipus Rex and George Walker’s Lilacs. Featuring a distinguished group of soloists, the concerts will once again spotlight the talents of the Opera Philadelphia Orchestra and Chorus.

Tickets are available for both weekend performances. In order to serve the widest possible audience, Opera Philadelphia will offer a FREE livestream of Friday’s concert performances from Verizon Hall. The livestream will begin at 8:00 p.m. on the Opera Philadelphia Channel, which is available for viewing at www.operaphila.tv, on TV screens via AppleTV, Android TV, Roku, Amazon FireTV, and Chromecast, and on mobile devices via iPhone, iPad, and Android apps. The video will remain on the Opera Philadelphia Channel for on-demand viewing through Sunday, Feb. 20. 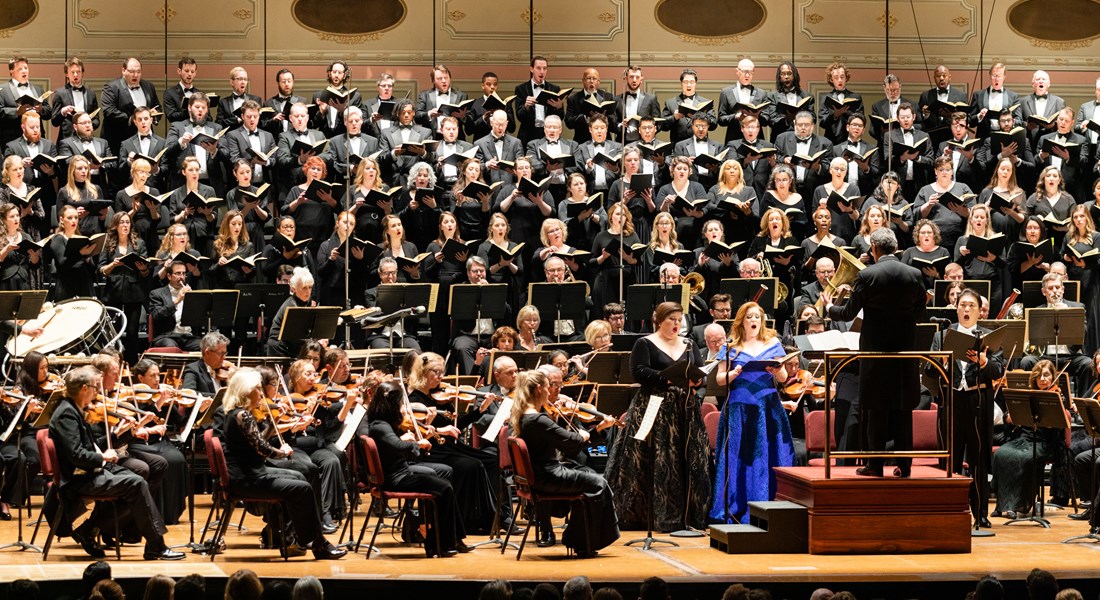 Stravinsky launched music’s neoclassical movement, and according to no less a figure than Leonard Bernstein, Oedipus Rex was the most “awesome product” of the Russian composer’s neoclassical years. A Handelian opera-oratorio for orchestra, narrator, soloists and male chorus, its Latin libretto was translated from Jean Cocteau’s French interpretation of Sophocles' archetypal Greek tragedy. Despite its classical inspiration, however, there is a continuity between the dramatic grandeur of the work and Stravinsky’s later religious ones. And although Oedipus Rex is seldom performed, its drama, wit, and consummate artistry does full justice to the composer’s formidable legacy.

Each concert opens with Lilacs by American composer George Walker (1922-2018). The 15-minute work, scored for soprano soloist and orchestra, is a setting of Walt Whitman’s poem, “When Lilacs Last in the Dooryard Bloom’d,” a poignant reflection on the assassination of President Abraham Lincoln. Premiered on February 1, 1996, in Boston, in honor of famed tenor Roland Hayes, Lilacs was awarded with that year’s Pulitzer Prize for Music, making Walker the first Black composer to win the award. His trailblazing series of "firsts" included being the first Black graduate of the Curtis Institute of Music, the first Black pianist to play a recital at New York's Town Hall, and the first Black instrumentalist to play solo with the Philadelphia Orchestra.

Soprano Tiffany Townsend, who made her company debut as Princess Ninetta in Prokofiev’s The Love for Three Oranges in Festival O19, returns as the soloist for Lilacs, bringing her “depth and tremendous vocal power” (Bachtrack) to the stage of Verizon Hall.

Mark Clague, who wrote the entry on Walker for the International Dictionary of Black Composers, points to elements of race and politics in Walker's compositions. “He constructs his music so that the unknowing listener should not be able to distinguish it from that of his ‘canonized’ white contemporaries,” Clague writes, citing influences from Stravinsky, Debussy and the serialist school of composers. “He frequently draws on black musical idioms, such as spirituals, blues patterns and jazz tropes. Walker’s music, however, is not a collage of modern styles, or a pastiche, but has its own distinct voice.”