The 18-month shutdown has given Orth, a graduate of Opera Philadelphia’s Composer in Residence program, more time to explore the opportunities for electronics in opera and think about emerging from the pandemic into a more optimistic time.

“Music is fun and there’s a part of life that’s super joyful,” Orth said, “and I want us to be able to remember that and create from that.”

Inspired by poems of St. Augustine, Orth reached out to Toronto-based playwright Kanika Ambrose, a former collaborator at Tapestry Opera, about the libretto. They envisioned a resurrecting, energizing force inviting people to come into the world anew, as embodied through mezzo-soprano Kristen Choi and a quartet of dancers.

“I thought about dance and resurrection and rebirth and joy,” Ambrose said, “and a lot of the anxiety we have around coming back to life as we know it.”

Orth was also inspired by the artistic personalities of the entire artistic team. Watching Choi’s Instagram videos, Orth and Ambrose saw an artist able to flip from opera to pop with joy and abandon, and a chance to tap into her personality as well as artistry. Orth, who is half-Chinese, was also intent on featuring an Asian singer outside of the confines of the traditional roles provided in opera.

TakTakShoo fuses opera and K-pop, marimba and electronics, including Ableton Live and a MIMU glove, which converts gestures to sound and feeds into the choreographed element of the work.

“It is an exploration of my favorite things,” Orth said, “opera, electronica, dance, emotional journeys, technology, a set of diverse and amazing collaborators, and a push of boundaries.”

The piece also has a fragmented nature, reflective of Orth and Ambrose’s evolving work processes as each became a new mom and redefined their schedules, finding short intervals and working through frustrations. It wasn’t always easy, “but we still got a piece out of it,” Orth said.

“We still got a piece and it’s full of joy,” Ambrose said, “which is kind of like parenting, too.” 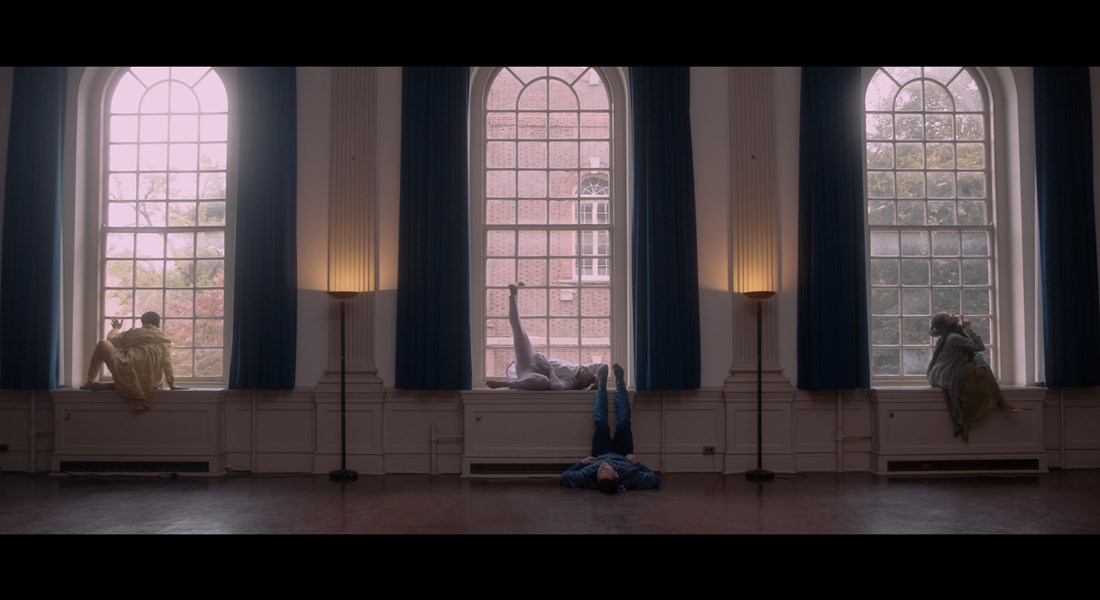 Director Jeffrey Page recognized a need for a respite in a world of lockdowns and political polarization. “We could use a reminder that we have within us an ability to be wild, spine-tingling, arousing, and electrifyingly zestful,” Page said.

To Page, TakTakShoo represented a change in the world as we know it, as well as a cleansing, shaking off the stagnation of the past.

“TakTakShoo reframes how we think about the relationship between canonical works and the immediacy and technology of an activated ‘NOW’ … Rene is pushing the envelope of what we have always understood opera to be, and its parallel of how this global pandemic has also forced us to recalibrate out-of-date ideas.”

The first in the second season of Digital Commissions, TakTakShoo echoes the spirit of the first season, continuing to expand and explore what is possible in opera.

“I was deeply thankful that season one of the digital commissions resonated with so many,” says Sarah Williams, Opera Philadelphia’s Director of New Works and Creative Producer. “This series embraces the power of art to foster empathy and build understanding of timely and universal issues and the potential of technology to catalyze conversations and empower creatives. It’s an opportunity to create forward-looking digital experiences, expand artistic practice, elevate a diversity of art, and engage with the global arts community.”

Filmed in October at Christ Church Neighborhood House in Philadelphia, TakTakShoo features video production and post-production by Kevin Eikenberg and Evan Chapman of Four/Ten Media, with sound curation, supervision, and engineering by Rob Kaplowitz. The 10-minute film will be available for rent for $10 as well as unlimited viewing with an annual Channel Pass beginning Friday, Nov. 19. Visit operaphila.tv to start streaming the Opera Philadelphia Channel.

Mezzo-soprano Kristen Choi has been hailed by Opera News as a “powerhouse in the making” for her portrayal of Suzuki in Madame Butterfly, a role she was scheduled to debut at Opera Philadelphia in 2020 (postponed due to COVID-19) and will return to in a future season. During the 2021-2022 season, she will make her Dallas Opera debut as the Stewardess in Flight and Maddalena in Rigoletto, and her HALO debut as Annina in La traviata. A native of California, she holds a master's degree of music from the San Francisco Conservatory of Music.

Ralph Sorrentino serves as principal percussionist with Opera Philadelphia and section percussionist with the Pennsylvania Ballet Orchestra. He is the Director of Percussion Studies at West Chester University, where he teaches applied percussion and directs the West Chester University Percussion Ensemble. Sorrentino has performed in many of the world’s great concert halls with groups like the Philadelphia Orchestra, the Chicago Symphony Orchestra, the Russian National Orchestra, the Chamber Orchestra of Philadelphia, the Philly Pops, Orchestra 2001, and the New World, Delaware, Harrisburg, Lancaster, Kennett and Reading symphonies. Along with flutist Sophia Anastasia, he is a founding member of Electrum Duo.

Rene Orth is a composer that "breaks new ground" (Opera News), writing music described as “...always dramatic, reflective, rarely predictable, and often electronic” (Musical America).  Her music focuses on dramatic and lyrical storytelling, and she takes a keen interest in blending electronic soundscapes and beats with acoustic music.  She recently completed her three-year tenure as Composer-in-Residence for Opera Philadelphia, and she is collaborating with librettist Hannah Moscovitch on 10 Days in a Madhouse, a new opera based on the extraordinary story of reporter Nellie Bly admitting herself to a women’s sanatorium in 19th century New York, to premiere in Opera Philadelphia’s Festival O.

Kanika Ambrose is a Toronto-based playwright and librettist of black-Caribbean descent who works to honor and represent the unique experiences of black people. Her work has been featured at the Curtis Institute of Music, Tapestry Opera, Obsidian Theatre, Cahoots Theatre, and American Lyric Theater. She has been playwright-in-residence at Cahoots Theatre and Obsidian Theatre Company. She is the former Artistic Producer of Paprika Festival and one of Cahoots Theatre Company's 30 for 30 theatremakers.

Jeffrey Page is an Emmy Award-nominated director and choreographer who spearheaded the 2015 and 2018 Tokyo productions of the musical Memphis, which received four Yomiuri Award nominations, including Best Musical. The first African American to be named the Marcus Institute Fellow for Opera Directing at The Juilliard School, Page won an MTV Video Music Award for his work with Beyoncé, whose creative team have included him for more than 12 years. His work was featured on Beyoncé’s “The Formation World Tour,” in her historic Coachella Valley Music and Arts Festival performance, and in two of her HBO specials. In 2016, he established Movin’ Legacy as an Indianapolis-based nonprofit organization dedicated to the ethnology and documentation of contemporary and traditional dance from Africa and the African diaspora. Currently, as co-director and choreographer, he is working with Diane Paulus and the American Repertory Theatre at Harvard University to mount the Broadway revival of 1776.

Four/Ten Media is a production company born from the partnership between filmmakers and percussionists Kevin Eikenberg and Evan Chapman. Kevin and Evan’s unique background as classically trained percussionists has allowed the duo to create fresh and musically authentic visual representations of works in the contemporary classical and pop worlds. More at fourtenmedia.net

Rob Kaplowitz is most interested in the stories told by deliberately curated sound and music, and how those stories interact with society. He has spent the last 25 years creating work as a sound designer and composer and has been honored with a Tony Award for Fela! and an OBIE Award for Sustained Excellence in Sound Design, among other flattering celebrations of his work. More at ninehostagearts.com.

The Opera Philadelphia Channel creates a digital space in which artists can perform and explore, through a series of new commissions by visionary composers and dynamic performances produced for the screen. Season subscriptions priced at $99 are offered along with pay-per-view rental options for individual performances. The channel is available for viewing on computers and mobile devices, and on TV screens via Chromecast and the Opera Philadelphia Channel app on AppleTV, Android TV, Roku, and Amazon FireTV. For more information, visit operaphila.tv.