Composer Angélica Negrón’s The Island We Made premieres on the Opera Philadelphia Channel on Friday, March 19

Opera Philadelphia’s latest digital offering, The Island We Made, combines ethereal electronic music, personal storytelling, arthouse filmmaking, and the transformative art of drag lip-sync to form an art-opera film. A deeply personal exploration of familial relationships told as a haunting lullaby, The Island We Made stems from the memories and individual relationships of its collaborators: composer Angélica Negrón, drag superstar Sasha Velour, and filmmaker Matthew Placek.

“The inspiration behind this piece is the shared personal stories between Matthew, Sasha, and me, about the limitations of relationships in general, but also particularly those connected to the women that shaped us,” said Negrón, who also plays electronics in the work. “The deep resonance that conversations that we’ve never had with loved ones can have on us and the ways these can find their voice in other vessels and sometimes even within us.”

Negrón’s textured music blends trembling synths, heavy pauses, pulsating drones, and ‘90s micro-samples from the soundtrack of her childhood and is performed by vocalist Eliza Bagg and harpist Bridget Kibbey.

As the winner of "RuPaul’s Drag Race Season 9," Velour has spoken publicly about the loss of her mother on television, and her vulnerability and personal storytelling has built a strong connection with fans around the world who also faced loss, grief, and healing. For The Island We Made, Velour tapped into that personal story in her lip-synced performance.

“The piece itself plays with the idea of embodiment,” Velour said, “which is why lip-syncing felt so correct! By embodying Eliza’s voice in drag, I also got to add a personal layer to the storytelling—grounding it in my body but making space for many others at the same time. As Angélica wrote, ‘My lips, your voice…inside the space in my mouth.’”

Throughout the film, Velour plays an omniscient observer. “I imagined the character as the embodiment of Queerness,” said Velour, “a loving non-judgmental spirit who haunts a house and tends to a person who is busy shaping an idea of it for themselves. In my touring experiences as a drag queen, people have often told me that seeing and listening to drag has helped them better understand their own identity, relationships, maybe even their own inner fabulousness better. It is really the biggest honor; I think it’s also one of the reasons that drag has been such an enduring fixture of art and performance!”

Placek, a renowned photographer, filmmaker, and digital artist, worked with Negrón and Velour from the beginning to create the sensitive and evocative film. Together they reflected on the plight and celebration of the mother, Placek said, and the sacred feminine nature of the role.

The film was shot inside a mid-century Staten Island house. The owner’s mother had recently passed, and the house is now for sale, a poetic reflection of the themes of The Island We Made.

“The Island We Made is a film examining the limitations of relationships, a multigenerational depiction of ‘Mother,’ and the transitional state of the ‘home,’” Placek said.

The Island We Made premieres on the Opera Philadelphia Channel at 8 p.m. on Friday, March 19, 2021. It is available with a Season Pass, as a seven-day rental for $10, or as part of the $25 Digital Commissions Bundle with Tyshawn Sorey’s Save the Boys, Courtney Bryan’s Blessed, and a forthcoming work by Caroline Shaw. Visit operaphila.tv for details.

Puerto Rican-born composer and multi-instrumentalist Angélica Negrón writes music for accordions, robotic instruments, toys and electronics as well as chamber ensembles and orchestras. Her music has been described as “wistfully idiosyncratic and contemplative” (WQXR/Q2) and “mesmerizing and affecting” (Feast of Music) while the New York Times noted her “capacity to surprise” and her “quirky approach to scoring.” Angélica has been commissioned by the Bang on a Can All-Stars, loadbang, MATA Festival, Brooklyn Youth Chorus, Sō Percussion, the American Composers Orchestra, and the New York Botanical Garden, among others.  Her music has been performed at the Kennedy Center, the Ecstatic Music Festival, EMPAC, Bang on a Can Marathon and the 2016 New York Philharmonic Biennial and her film scores have been heard numerous times at the Tribeca Film Festival. She has collaborated with artists like Sō Percussion, The Knights, Face the Music, and NOVUS NY, among others and is a founding member of the tropical electronic band Balún.  Angélica holds a Master’s degree in music composition from New York University and pursued doctoral studies at The Graduate Center (CUNY) under the guidance of Tania León.  She's a teaching artist for New York Philharmonic's Very Young Composers Program working with young learners on creative composition projects. Upcoming premieres include works for the LA Philharmonic, Dallas Symphony Orchestra and National Symphony Orchestra, San Francisco Girls Chorus, and NY Philharmonic Project 19 initiative. Negrón continues to perform and compose for film. www.angelicanegron.com

Matthew Placek Born in Ohio, Placek relocated to New York City in 1997 to pursue his interests in photography, video, and installation. His commitment to capturing presence, whether as a sense of place, the passage of time, and/or the relationships between people, has led to his multimedia output. His practice is durational and also engaged with the archive. Of primary concern to Placek is negotiating uninterrupted concentration from both his viewers and subjects, which he does through expanding the formal and conceptual notions of portraiture. As our attention spans diminish due to the spatio-temporal dislocations of our era, the frenzied use of cell phones and social media, Placek is interested in cultivating a moment with the sitter that lasts longer than a glance and can generate immersive and resonant experiences. Placek has collaborated with notable contemporary artists such as Marina Abramović, Julian Schnabel, David Salle, Vanessa Beecroft, Richard Prince, Brice Marden, Cindy Sherman, James Ivory, and Yoko Ono. His individual and collaborative work has been exhibited at The Museum of Modern Art, New York, The Kitchen, Deitch Projects, Mary Boone Gallery, Galleria Lia Rumma, the Sundance Film Festival’s “New Frontier,” The Toronto International Film Festival, The Stockholm International Film Festival, The National Young Arts Foundation and the National Monument Fort Jay at Governors Island.  He is currently supported by NYFA’s ARTSPIRE program.  www.matthewplacek.com

Sasha Velour is a genderfluid drag queen, global theatre star, television producer, and winner of RuPaul's Drag Race (Season 9). Velour has had top billing in drag shows around the world, including her internationally renowned solo theatrical work, Smoke & Mirrors, with sold-out appearances in New York, Los Angeles, San Francisco, London, Toronto, Vancouver, Auckland, and more. Last year, she executive produced and starred in her first TV series, NightGowns with Sasha Velour (Quibi, 2020), which the New York Times hailed as "among the most life-affirming shows you could find on any platform." She won a Real Screen award for the show, which is coming to the Roku Channel this year. Through her genre-defying work, Velour is creating new business models for drag as art, which Fast Company says is “disrupting the business of drag.” As a public speaker, she has spoken at the Smithsonian, the Teen Vogue Summit, colleges and universities, and on behalf of the US State Department abroad. Though a lifelong lover of divas, The Island We Made marks Velour's first true foray into the world of opera. https://www.sashavelour.com

Eliza Bagg is a Los Angeles-based experimental musician, working primarily as a vocalist in the field of contemporary classical music along with producing her own work. She has worked across genres with prominent experimental artists ranging from performing in Meredith Monk's opera Atlas with the Los Angeles Philharmonic (dir. Yuval Sharon) to touring regularly as a member of Roomful of Teeth, premiering a new work by Ellen Reid as a soloist with the New York Philharmonic, orsinging chamber motets by John Zorn. She has collaborated closely with and premiered works by composers like Caroline Shaw, Michael Gordon, David Lang, Christopher Cerrone, and Ted Hearne, among others.

Bagg also composes, records, and produces an avant-pop project as Lisel. Called "billowing, crystalline” (Gorilla vs. Bear), Lisel's “fractured, futurist form of pop” (WNYC), is grounded in her extensive career as a vocalist of Renaissance, Baroque and minimalist/post-minimalist singing styles, and she has received particular recognition for her unique vocal sound, which Pitchfork compared to "a lovelorn alien reaching out from the farthest reaches of the galaxy.” www.elizabagg.com

Bridget Kibbey, called the "Yo-Yo Ma of the harp," by Vogue Senior Editor Corey Seymour, is in demand for her innovative, virtuosic performances that expand the expressive range of the harp. Collaborating with some of today's top artists, she crosses genres to emphasize the harp's role through centuries and cultures of music. The New York Times has remarked that “...she made it seem as though her instrument had been waiting all its life to explode with the gorgeous colors and energetic figures she was getting from it.”

Kibbey has received a prestigious Avery Fisher Career Grant and a Salon de Virtuosi SONY Recording Grant. She is the winner of the Premiere Prix at the Journées de les Harpes Competition in Arles, France, the Concert Artists Guild competition, and the Juilliard School’s Peter Mennin Prize for Artistic Excellence and Leadership. She is a graduate of the Chamber Music Society of Lincoln Center’s Bowers Program (formerly CMS Two), and is featured annually with the CMSLC.  www.bridgetkibbey.com 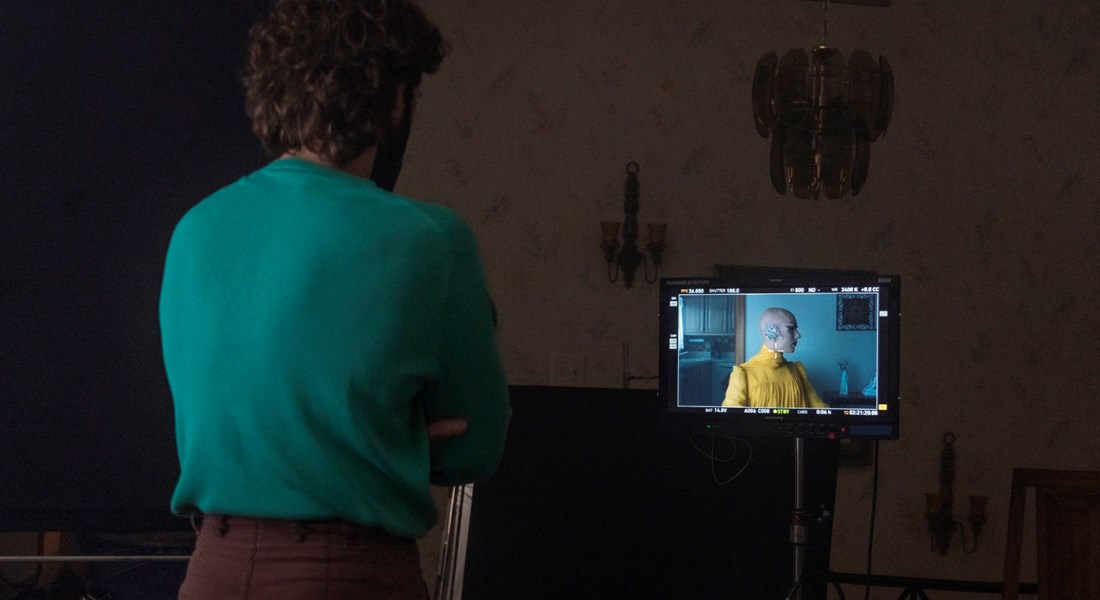 Behind the scenes of The Island We Made. Credit: Olivia DiPasca