Opera Philadelphia celebrates a return to live audiences with a dazzling summer evening of opera, picnics, and fireworks at the Mann

Two of classical music’s most thrilling tenors come together with Opera Philadelphia for a beautiful summer evening of vocal pyrotechnics, picnics under the stars, and a dazzling fireworks display. “An Evening of Vocal Fireworks” spotlights the incredible talents of tenors Lawrence Brownlee and Michael Spyres in friendly sing-off on Thursday, Aug. 26, at 7:00 p.m. at the Mann Center for the Performing Arts.

The special pre-season concert, part of the Mann’s Summer Picnic Series, reunites the “dueling tenors” for the first live performance in North America of music from their critically acclaimed 2020 album, Amici e Rivali (Friends & Rivals), featuring arias and duets from some of Rossini’s most beloved operas and rarely heard works, such as The Barber of Seville, Ricciardo e Zoraide, and Otello, plus a few surprises. Jack Mulroney Music Director Corrado Rovaris leads the Opera Philadelphia Orchestra and Chorus from the TD Pavilion stage. The evening concludes with a display of fireworks high above the Fairmount Park concert venue.

The concert marks Opera Philadelphia’s first full capacity event in 18 months (a May 2021 concert series was limited to just 500 participants per night). Subscription tickets are now on sale. Single tickets go on sale on Monday, July 19, at 9 a.m. at operaphila.org or 215.732.8400. Lawn seating at the Mann is just $25, and picnics are encouraged at the venue to enjoy before and during the show. Parking at the venue is free.

In 2018 at the Concertgebouw in Amsterdam, Brownlee and Spyres engaged in an incredible encore duet of “Ah! Vieni nel tuo sangue” from Rossini’s Otello, video of which went viral. The buzz led to the development of the groundbreaking Warner Classics album Amici e Rivali – Friends and Rivals – comprising more than a dozen arias, duets, and trios from seven of the composer’s operas, from the popular comedy The Barber of Seville, to six serious dramatic works Otello, Armida, La donna del Lago, Elisabetta, Regina d'Inghilterra, and Le Siège de Corinthe, and the rarely performed Ricciardo e Zoraide. The “dueling tenors” album, conducted by Opera Philadelphia’s Corrado Rovaris, was released in November 2020 to critical acclaim, with Opera News raving “Spyres is riveting” and “Brownlee is awesome in his dazzling technical ease and sheer grace,” and The New Yorker declaring, “Amici e Rivali is a nice reminder of the sparks that fly when two first-rate voices meet in the playground of a Rossini opera." 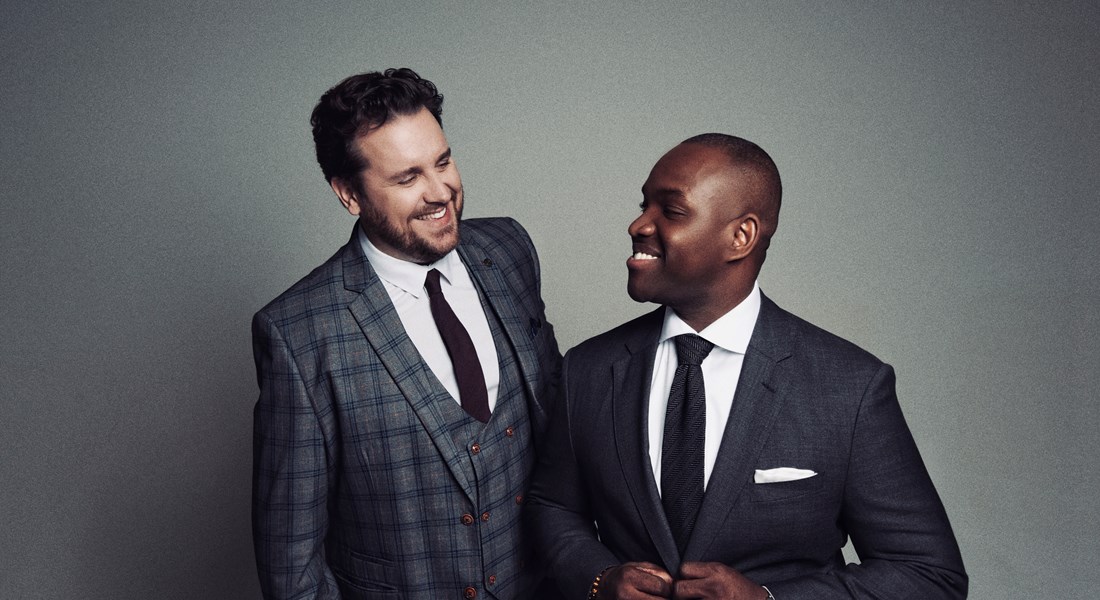 Lawrence Brownlee is a leading figure in opera, both as a singer on the world's top stages, and as a voice for activism and diversity in the industry. Captivating audiences and critics around the globe, he has been hailed as “an international star in the bel canto operatic repertory” (The New York Times), “one of the world’s leading bel canto stars” (The Guardian), and “one of the most in-demand opera singers in the world today” (NPR). An Artistic Advisor to Opera Philadelphia, he has emerged as a pivotal voice in the company’s and the classical music industry’s shift toward digital programming and the resurgence of conversations around racial justice. Brownlee also recently joined The Juilliard School as a Distinguished Visiting Faculty Member.

Michael Spyres is one of the most sought-after tenors of his generation and has been celebrated at many of the most prestigious international opera houses, festivals, and concert halls. Accomplished and acclaimed in the widest range of repertoire his career has taken him from the genres of Baroque to Classical to 20th century while firmly establishing himself as an expert within the bel canto repertoire as well as within Rossini and French Grand Opera. He made his Opera Philadelphia debut in Festival O18 as Edgardo in a new staging of Lucia di Lammermoor.

The Opera Philadelphia Channel creates a digital space in which artists can perform and explore, through a series of new commissions by visionary composers and dynamic performances produced for the screen. Season subscriptions priced at $99 are offered along with pay-per-view rental options for individual performances. The channel is available for viewing on computers and mobile devices, and on TV screens via Chromecast and the Opera Philadelphia Channel app on AppleTV, Android TV, Roku, and Amazon FireTV. For more information, visit operaphila.tv.