Caroline Shaw’s We Need to Talk premieres on the Opera Philadelphia Channel on Friday, April 16

The voice of Greif, singing live to camera, is both accompanied by and in conversation with a choral track of Shaw’s own voice and recitation of the poem by Carson herself. Additional electronic composition and sampling of old film scores create an environment filled with tension and energy. 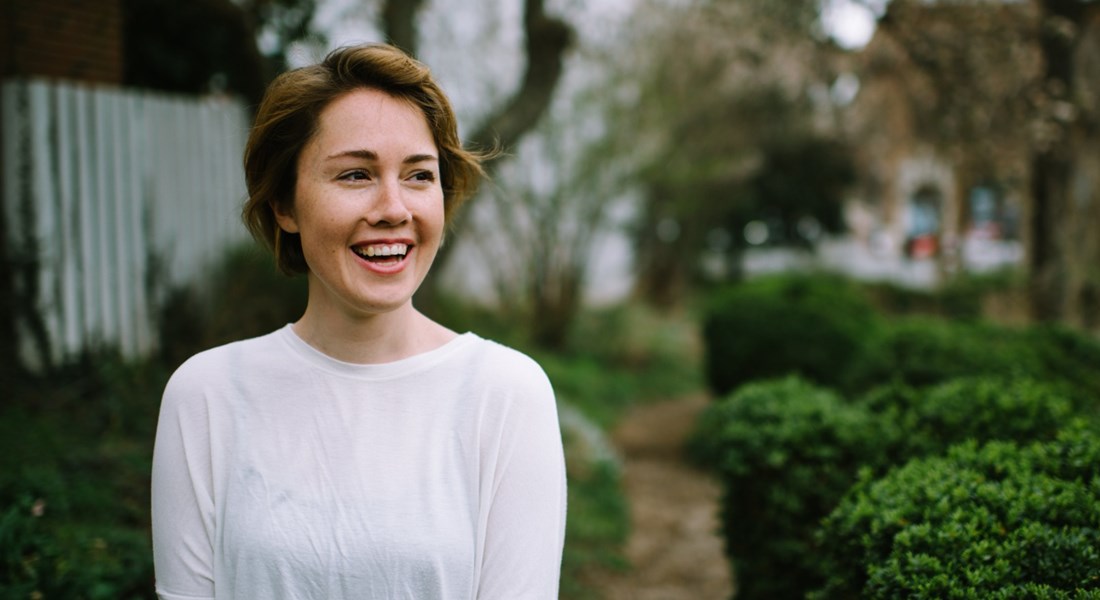 “There’s a very unstable quality to the whole text,” Shaw said, “it’s shifting qualities constantly, and there’s an underlying sense of both grief and anger that felt a little bit of this moment.”

New Works Director and Creative Producer Sarah Williams commissioned Shaw based on her artistry, creativity, and masterful use of intricate harmonies. “While she hasn’t written an opera yet,” Williams said, “she’s a real storyteller in all of her music.”

Towey worked with Four/Ten Media’s Kevin Eikenberg and Evan Chapman to draw out the lushness of the music and lyrics, to make the piece feel both contemporary and timeless, while still leaving space for interpretation.

Filmed in the expanse of a Spring Arts district warehouse in Philadelphia, the long room allowed for dynamic shots of Greif moving through the space as she also moves through a range of emotions and expression. Greif breaks the fourth wall, engaging directly with the camera and Carson’s voice. 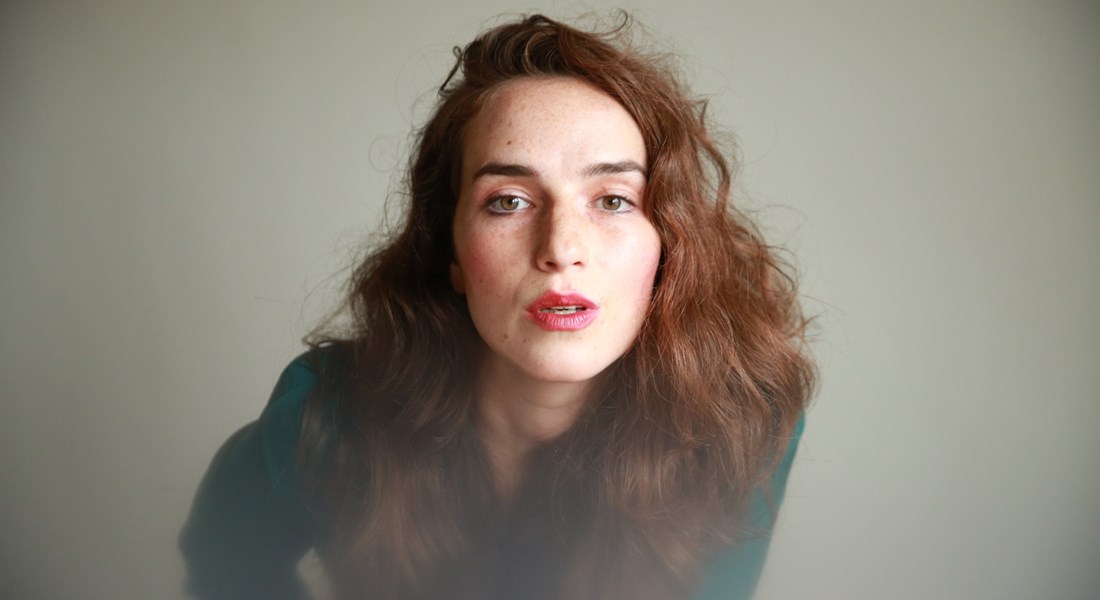 “She’s such a dynamic singer and a wild, simmering presence on camera,” Towey said of Greif. “She understands how to play in a wide range of artistry with her voice and her performance.”

Both Carson’s poem and Shaw’s music resonated with Greif.

“I had to sit down while I was reading this poem,” Greif said. “When I finished listening to Caroline Shaw’s thrilling, crystalline, specific recording of herself singing the piece I was surprised I was still just sitting there in my kitchen, sweating and sort of buzzing. The piece is so warm, sensual, cutting … And Maureen created a fabulous dramatic space for this piece to live and grow.”

We Need to Talk was filmed in late March, following weeks of digital meetings between the creators, who Shaw described as a “dream team.”

“The fact that all rehearsals were digital, and all of the collaboration was remote,” Towey said, “I think there’s naturally an explosive joy you feel when you’re in the room together during these times, able to make something, and also a little bit of a catharsis for all of us trying to get through such a dark year.”

We Need to Talk premieres April 16, 2021 on the Opera Philadelphia Channel. It is available with a Season Pass, as a seven-day rental for $10, or as part of the $25 Digital Commissions Bundle with Tyshawn Sorey’s Save the Boys, Courtney Bryan’s Blessed, and Angélica Negrón’s The Island We Made. Visit operaphila.tv for details.

We Need to Talk

Caroline Shaw is a New York-based musician—vocalist, violinist, composer, and producer—who performs in solo and collaborative projects. She was the youngest recipient of the Pulitzer Prize for Music in 2013 for Partita for 8 Voices, written for the Grammy-winning Roomful of Teeth, of which she is a member.

Recent commissions include new works for Renée Fleming with Inon Barnatan, Dawn Upshaw with Sō Percussion and Gil Kalish, Seattle Symphony, Anne Sofie von Otter with Philharmonia Baroque, the LA Philharmonic, Juilliard 415, the Orchestra of St. Luke’s with John Lithgow, the Dover Quartet, TENET, The Crossing, the Mendelssohn Club of Philadelphia, the Calidore Quartet, Brooklyn Rider, the Baltimore Symphony, and Roomful of Teeth with A Far Cry. Caroline’s film scores include Erica Fae’s To Keep the Light and Josephine Decker’s Madeline’s Madeline as well as the upcoming short 8th Year of the Emergency by Maureen Towey. She has produced for Kanye West (The Life of Pablo; Ye) and Nas (NASIR), and has contributed to records by The National, and by Arcade Fire’s Richard Reed Parry. More at carolineshaw.com

Maureen Towey is a director, writer and producer working across artistic mediums. Towey has worked as a Creative Director for Grammy award-winning musicians such as Arcade Fire, Ray LaMontagne, and Esperanza Spalding. Her film work includes a recent music video for Sharon Van Etten’s “Seventeen” and the celebrated short film “The 8th Year of the Emergency” starring Mary Beth Peil, Phillipa Soo, Linda Emond and Jeffrey DeMunn. A highlight of her theater work is directing Black Mountain Songs, which was co-created with Bryce Dessner (of The National) and Richard Reed Parry and starred the Brooklyn Youth Chorus (BAM in NYC, Barbican in London). For The New York Times, Towey directed the award-winning documentary “Sensations of Sound” and served as the Senior Producer for The Daily 360, the only series in the world to create professional VR journalism on a daily basis. Towey has also worked as a contributing photo editor at The New York Times Magazine where she produced ten short films for their 2015 Great Performers series, starring Melissa McCarthy, Lily Tomlin, Michael Fassbender and others. More at maureentowey.com

Ariadne Greif, praised for her “luminous, expressive voice,” “searing top notes,” and “dusky depths,” (NY Times), started out as a ‘boy’ soprano at the LA Opera, making an adult debut singing Lutoslawski’s Chantefleurs et Chantefables with the American Symphony Orchestra. She starred in roles ranging from Therese/Tirésias in Poulenc’s Les Mamelles de Tirésias at the Aldeburgh Festival, Adina in The Elixir of Love with the Orlando Philharmonic, to Sappho in Atthis by Georg Friedrich Haas, which the NY Times called “one of the most searingly painful and revealing operatic performances in recent times.” She performed a “soaring...spine-chilling” staged recital with Resonant Bodies Australia and the Sydney Chamber Opera, William Kentridge’s Ursonate at Den Norske Opera for the Ultima Festival in Oslo, returning in 2020 with a project of her own, Bird Party. Recent concert performances included Mahler Symphony No. 4, Carmina Burana, Beethoven Symphony No. 9, Babbit’s A Solo Requiem. She performed chamber music in Weill Hall, The Park Avenue Armory, The Ojai Festival, across North America, France, Northern Europe, and the Middle East, in appearances with Lukas Ligeti, Gabriel Kahane, Pekka Kuusisto, The Knights, JACK Quartet, among others. She has premiered over a hundred new works and operas.

Four/Ten Media is a production company born from the partnership between filmmakers and percussionists Kevin Eikenberg and Evan Chapman. Kevin and Evan’s unique background as classically trained percussionists has allowed the duo to create fresh and musically authentic visual representations of works in the contemporary classical and pop worlds. More at fourtenmedia.net

Anne Carson is a poet, essayist, professor of Classics, and translator. Carson has gained both critical accolades and a wide readership over the course of her “unclassifiable” publishing career. In addition to her many highly regarded translations of classical writers such as Sappho and Euripides, and her triptych rendering of An Oresteia (2009), she has published poems, essays, libretti, prose criticism, and verse novels that often cross genres. Known for her supreme erudition—Merkin called her “one of the great pasticheurs”—her poetry can also be heartbreaking, and she regularly writes on love, desire, sexual longing, and despair. More at poetryfoundation.org