What does it take to face ourselves? Enter the darkness in search of something beautiful, transcendent. But be very careful what you need to know…

This bold new work with a libretto by legendary poet  Anne Waldman and story, screenplay, and direction by Michael Joseph McQuilken blends opera and rock into an alchemical exploration of magic, mystery, regret, and redemption.

Set in a nightmarish Bardo, a place between death and rebirth, a tormented writer (Timur) faces down demons of his own making. Forced to confront the darkest moment in his life, he mines fractured and repressed memories for a way out. A woman (Jennifer Harrison Newman) is at the center of all the writer’s afterlife encounters. She is the subject of his life’s greatest regret, and she materializes everywhere in this Otherworld. The writer cannot detach any thoughts of his life from her.

“Growing up, I always felt like I saw the world differently; that I saw the dark side of things more readily than others,” said composer David T. Little. “The process of creating Black Lodge was one of accepting that part of myself: of exploring that darkness, travelling through it in hopes that there would be something beautiful, even transcendent on the other side.”

Black Lodge “highlights the sense of existential dilemma for the artist in a world of contradiction, and personal upheaval,” said librettist Anne Waldman and “explores our darkest deeds and aspirations with insight and magnetizing power. The Black Lodge is a metaphor for our hidden desires, nightmares, our love, and loss. It is a voyage through the spiritual and unpredictable ‘bardo’ between life and death.” 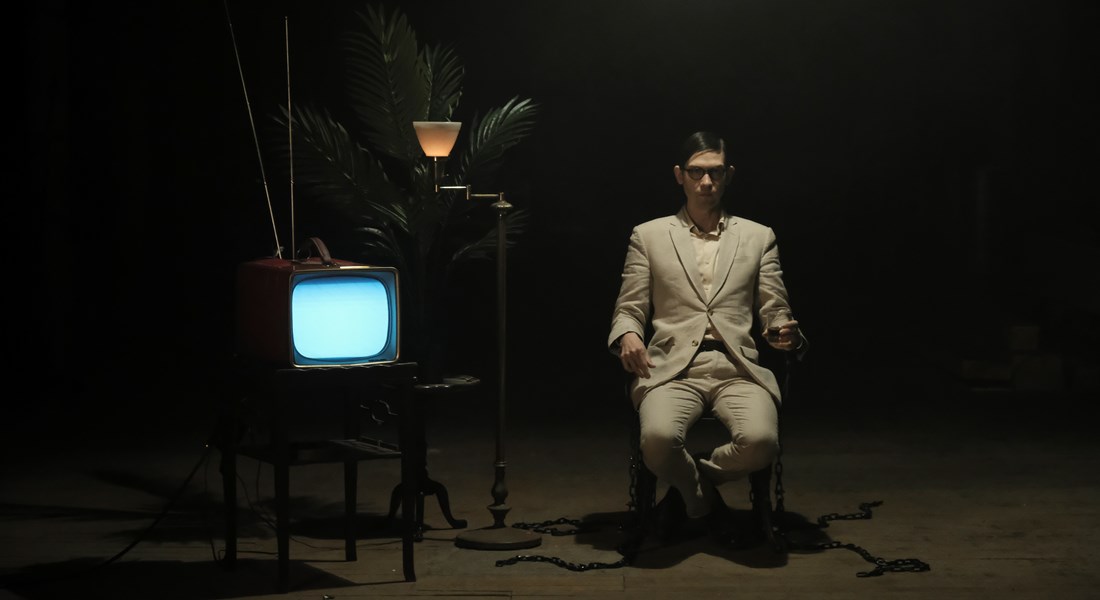 Trapped in a nightmarish Bardo a tormented writer faces down demons of his own Credit: Matthew Soltesz

The project is attracting attention throughout the music industry. Renowned musician Thurston Moore, known as a member of Sonic Youth, serves as executive producer of Black Lodge. "This is opera ripping through the fabric of future vision psychosis where the integrity of classic form clasps the hands of radical possibilities," said Moore. "David T. Little takes no prisoners here, in confluence with poet angel head Anne Waldman’s libretto of nature, irreality, and spirit consciousness, divining deliverance from life’s spectacle of chaos and love. You’re about to have your mind scorched, my friends!"

Composer Philip Glass (Akhnaten, Einstein on the Beach) is also a fan.  “Black Lodge is a bold new operatic film,” said Glass. “It seamlessly blends poetry and music into a powerful cinematic experience.”

Black Lodge is a continued collaboration with the groundbreaking Beth Morrison Projects, the producing entity that developed and produced Black Lodge over the past ten years. Founded by “contemporary opera mastermind” (LA Times) Beth Morrison, who was honored as one of Musical America’s Artists of the Year/Agents of Change in 2020, BMP has grown into “a driving force behind America’s thriving opera scene” (Financial Times), with Opera News declaring that the company, “more than any other… has helped propel the art form into the twenty-first century.”

Known as “one of the most imaginative young composers on the music-theatre scene” (New Yorker), Little is a graduate of Opera Philadelphia’s Composer in Residence program. His operas Dog Days, JFK, Vinkensport, and Soldier Songs have been widely acclaimed, with the 2021 Opera Philadelphia Channel film of Soldier Songs nominated for a GRAMMY award for Best Opera Recording. An active member of the Outrider experimental poetry movement, Waldman has published over forty books of poetry and has received numerous awards and honors for her poetry, including the American Book Awards' Lifetime Achievement Award. Internationally acclaimed stage director/writer/filmmaker McQuilken works fluidly in theater, opera, film, and music, and "has redefined collaborative art” (Philly Voice).

Described as a “punk-operatic spectacle” (LA Times), the dark glam opera band Timur and the Dime Museum was born to fuse sounds with fierceness and theatricality. Timur, “the extravagantly transgressive tenor” (LA Times), has made solo appearances with LA Philharmonic, Bang on a Can All-Stars, and Spoleto Festival, among many others.

Debuting in 2017, Opera Philadelphia’s annual, season-opening Festival O immediately garnered audience and critical acclaim, proving to be “a hotbed of operatic innovation” (New York Times) and “one of the most enjoyable additions to the fall calendar in years” (Washington Post). Following a two-year, pandemic-induced hiatus, the annual 12-day gathering for opera lovers returns in September 2022 with its fourth iteration, O22, featuring the company premiere of Rossini’s rarely performed Otello at the Academy of Music in an elegant production starring tenor Khanyiso Gwenxane in his U.S. debut in the title role and star tenor Lawrence Brownlee as Rodrigo. The festival also presents Toshio Hosokawa’s The Raven, inspired by Edgar Allan Poe’s haunting poem, in an immersive evening at the Miller Theater, and the world premiere of Black Lodge, a new cinematic opera with live musical accompaniment by the glam opera band Timur and the Dime Museum and the Opera Philadelphia Orchestra, produced by Beth Morrison Projects. Academy of Vocal Arts alumni Latonia Moore and André Courville lead two Afternoons at AVA recitals, while Opera on Film celebrates big screen with a series of film screenings ranging from adventurous shorts to bold, feature-length productions, including classic opera films, recent works created for the Opera Philadelphia Channel, artist talks, and more. All festival evenings can be capped off with Late Night Snacks, as the Bearded Ladies and a roster of deliciously dangerous and provocatively pleasurable performers operate an after-hours cabaret in a refitted industrial space, presented in partnership with the 2022 Philadelphia Fringe Festival. For more information, visit operaphila.org.