Season 3 of the Opera Philadelphia Channel features bold cinematic opera, new world premiere commissions, and partnerships with artists and producers from across the industry

In its first two years of streaming, the Opera Philadelphia Channel has garnered critical acclaim, audience accolades, and major award nominations ranging from GRAMMY and International Opera Award nominations to the inaugural Opera America Award for Digital Excellence in Opera. As audiences return to live performances, the digital opera channel called “one of the best bets going, worldwide” by the New York Times remains at the core of Opera Philadelphia’s mission, curating a lineup of cinematic opera presented in partnership with artists and producers from across the industry, including several films that premiered in September’s Festival O: Opera on Film series.

Season 3 highlights range from the streaming premiere of the Twin Peaks-inspired Black Lodge, produced by Beth Morrison Projects, to a family-oriented Hansel and Gretel film produced by Opera Ithaca, to the 10-episode opera series Everything for Dawn, produced by the Brooklyn-based Experiments in Opera in partnership with All ARTS. The upcoming year will also bring two new works in Opera Philadelphia’s renowned Digital Commissions series, from composers Yaz Lancaster (they/them) and Raquel Acevedo Klein (she/her).

Channel subscriptions are $9.99 per month or $99 per year. The channel is available for viewing on computers and mobile devices, and on TV screens via Chromecast and the Opera Philadelphia Channel app on AppleTV, Android TV, Roku, and Amazon FireTV. For more information, visit operaphila.tv.

“Be careful what you need to know,” warns the protagonist of David T. Little’s surrealist cinematic opera. Blending classical music with goth rock (and with a nod to David Lynch’s Twin Peaks), Black Lodge is a journey into magic, mystery, regret, and redemption.

Set in a nightmarish Bardo, a place between death and rebirth, a tormented writer (the charismatic Timur) faces down demons of his own making. Forced to confront the darkest moment in his life, he mines fractured and repressed memories for a way out. A woman (Jennifer Harrison Newman) is at the center of all the writer’s afterlife encounters. She is the subject of his life’s greatest regret, and she materializes everywhere in this Otherworld. The writer cannot detach any thoughts of his life from her. Produced by Beth Morrison Projects, the bold film features a libretto by legendary poet Anne Waldman and story, screenplay, and direction by Michael Joseph McQuilken.

The Passion of Scrooge
Now Streaming through January 8, 2023
Runtime: One hour and three minutes

Is this a film about Ebenezer Scrooge? About a composer’s life? An opera within an opera? The Passion of Scrooge blurs these lines between performance, documentary, and fiction, into a cinematic concert experience that’s seasoned with magical reality. Composer Jon Deak has adapted Charles Dickens’ timeless tale into a contemporary opera that melts the heart but doesn’t avoid the darkness in Scrooge that’s still resonant with the material concerns of our time. Using neither period costumes, nor set pieces to reconstruct old England, the film invites audiences to experience Charles Dickens’ A Christmas Carol with the imaginative possibilities of a radio play. And then, to meet those visions in your head, filmmaker H. Paul Moon‘s floating camera intimately captures musicians performing the score as characters themselves, led by baritone William Sharp, in this ageless, haunted redemption story about “us, everyone.”

A Jarful of Bees
Now Streaming through February 19, 2023
Runtime: 10 minutes

A multimedia, immersive short film on the transformation of memory and the mutability of familial relationships, created in collaboration with painter Natalie Frank, artist/animator Erin Pollock, with original story and concept by Eve Gigliotti and Paola Prestini. With music composed by Paola Prestini, text by Pulitzer Prize-winning librettist Royce Vavrek, performed by mezzo-soprano Eve Gigliotti, and commissioned by Jill and Bill Steinberg.

A complement to Opera Philadelphia’s staged and streaming productions, this FREE series looks deeper into the opera genre by exploring its musical and theatrical elements as well as cultural, social, and historical perspectives. The Reflection and Re-Vision series includes lectures, round-table discussions, and artist reflections, with episodes like “Reimagine the Composer,” “Reimagine the Opera Canon, and “Reimagining Opera’s Heroines for the Modern Age.” Major support for Reflection & Re-Vision has been provided by The Pew Center for Arts & Heritage.

In this comic opera film that begins in Lancaster County, Pennsylvania, a wide-eyed Amish teen (tenor Jon Lee Keenan) sings his way to adulthood on his Rumspringa through New York City, with the help of a failed Broadway actress (soprano Janet Szepei Todd). Written and directed by Adam Taylor, with music composed by Nathan Fletcher. Contains explicit language and brief nudity.

In a modern retelling of Plato’s Allegory of the Cave, a woman (soprano Julia Dawson) is cloistered in a prison of her own making until a mysterious stranger (Evcie Poares) shows her a way out. Featuring Mozart’s “Exsultate, Jubilate” (KV 165) and new music by Iranian-Canadian composer Iman Habibi with original Latin text, Obscura Nox is a combination of classical music and narrative film. Director Mary Birnbaum’s 26-minute “création lyrique” explores themes of isolation, the relationship between perception and reality, and society’s morphine-drip addiction to our screens.

In Opera Ithaca’s delightfully delicious adaptation of Engelbert Humperdinck's classic, two children who are lost in the woods are captured by a celebrity chef witch, who hosts the kids on her cooking show as both the guest stars... and the main ingredients.

Director and librettist Ben Robinson says the film was inspired by his grandmother's love of Julia Child. “Ms. Child's ease in the kitchen - and ability to laugh at herself - is the backbone of the Witch character,” says Robinson, Artistic Director of Opera Ithaca.

A live-action, contemporary adaptation of Arnold Schoenberg's song 'Erwartung' (from Vier Lieder, Op. 2, No.1), Erwartung / EXPECTATION recontextualizes the salon-like qualities of western lieder performance to a surrealistic bistro — told through the lens of a cabaret singer's reflection on a fever-dream encounter with a ghostly muse. Featuring Timothy McDevitt and Renate Rohlfing, the film is directed by George R. Miller.

Experiments in Opera’s made-for-TV opera series Everything for Dawn, which premiered in October on ALL ARTS, will reach new audiences in 2023 on to the Opera Philadelphia Channel. Featuring original music from 10 composers and librettos from a six-person writers’ room, the 10-part opera is a coming-of-age story chronicling a young Dawn’s growth after her father, an outsider artist, dies by suicide and is posthumously celebrated. Starring soprano Britt Hewitt (as Dawn Logan) and two-time Grammy-nominated artist Aaron Engebreth (as Mac Logan), the series is directed by Alison Moritz, with Eric Thomas Paton as director of photography. The opera unfolds over three periods set in the late 1990s and early 2000s.

Each episode was written by a different librettist and composer pair, and the resulting opera accommodates multiple voices and aesthetic styles. The full opera was workshopped and rehearsed over a three-year period and recorded and filmed on a soundstage in the fall of 2021. The premiere coincided with the tenth anniversary of Experiments in Opera, which has developed a reputation as a perennial disruptor of the classic genre.

“When we set out to create Everything for Dawn in 2018, we couldn’t have imagined the vigorous journey of collaboration and experimentation ahead of us,” Experiments in Opera co-founder Aaron Siegel said. “At a time when so much new opera is based on existing stories or figures, Everything for Dawn is a story of intrigue and drama that could only have emerged from the unique group of artists who created it.” 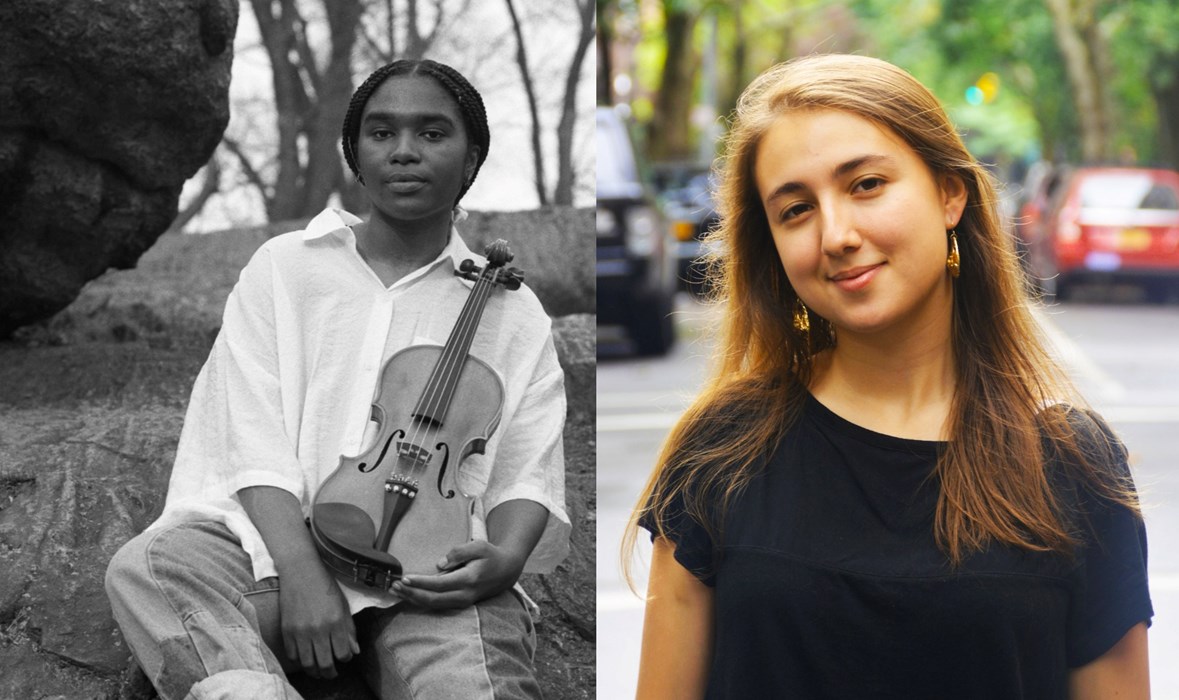 Yaz performs as a violinist, vocalist & steel-pannist in a wide variety of settings and their work is presented in many mediums and collaborative projects. It often reckons with specific influences ranging from politics of liberation and identity to natural phenomena and poetics. Their ongoing independent studies navigates prison-industrial-complex abolition, Marxist theory, and internet/social media cultures. Their writing appears in various online & in-print publications including I CARE IF YOU LISTEN, Afternoon Visitor, the tiny, and Underblong, where their poem “Ratios” was awarded the 2021 Blongprize, as well as a Pushcart nomination. Yaz has had the privilege & opportunity to build community and create with artists like A Far Cry, Andy Akiho, ContaQt (with Evan Ziporyn), Contemporaneous, Freddie June, George Lewis, JACK Quartet, Jacolby Satterwhite, Leilehua Lanzilotti, and Wadada Leo Smith. Most recently they have been developing post-genre duo laydøwn with Canadian guitarist-producer Andrew Noseworthy; and working on new music with Beth Morrison Projects, BlackBox Ensemble, and Bearthoven.

Composer Angélica Negrón calls the conductor, vocalist, instrumentalist, and visual artist Raquel Acevedo Klein a “force to be reckoned with.” Acevedo Klein was recently named by the Washington Post as a “classical composer and performer to watch in 2022.” She has conducted for the New York Philharmonic, Roomful of Teeth, the Grammy Award-winning Brooklyn Youth Chorus, Beth Morrison Projects, and the New Jersey Symphony Orchestra. She has premiered vocal work by John Adams, Philip Glass, Nico Muhly, and Bryce Dessner, and performed with Caroline Shaw, Alicia Keys, John Legend, Bon Iver, Arcade Fire, Claire Chase and the Boston Symphony Orchestra. She has performed onstage at Carnegie Hall, Lincoln Center, Radio City Music Hall, The Town Hall, BAM, and on The Tonight Show with Jimmy Fallon. In 2021, Acevedo Klein curated a four-week festival to celebrate the opening of Little Island, where she premiered her audience-interactive vocal symphony “Polyphonic Interlace.” Over the course of her young career, Acevedo Klein has captured the attention of the New York Times, the New Yorker, and the Los Angeles Times. Her versatility as a musician and composer makes Acevedo Klein a highly sought-after collaborator.

The Opera Philadelphia Channel creates a digital space in which artists can perform and explore, through a series of new commissions by visionary composers and dynamic performances produced for the screen. Subscriptions priced at $9.99 per month or $99 per year are offered along with free programming and pay-per-view rental options. The channel is available for viewing on computers and mobile devices, and on TV screens via Chromecast and the Opera Philadelphia Channel app on AppleTV, Android TV, Roku, and Amazon FireTV. For more information, visit operaphila.tv.