In the new film Svadba, a bridal party prepares for a wedding guided by traditions on a dreamy, idyllic beach

The power of unadorned human voices meets the rustic, expansive beauty of a dreamy oceanside cottage, where six women celebrate the eve of a wedding ─ with all its ritual, emotion, fun, and reflection ─ in Svadba, a new cinematic opera experience co-produced by Boston Lyric Opera (BLO) and Opera Philadelphia. 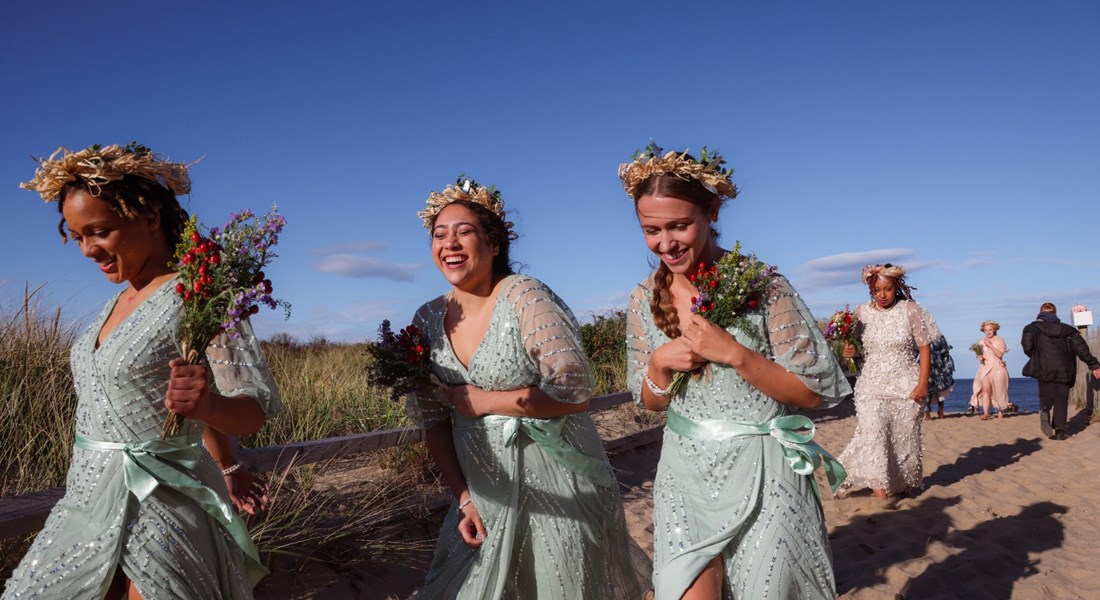 Live productions of Svadba have had artists sing and embody the six characters onstage; a film brings opportunities for added story dimensions. Six dancers and actors are on screen as the story’s main characters, while six singers who create the film’s music with voices and spare instrumentation also appear, suggesting ancestral spirits who watch over the action. Reflecting the alternately serene and hectic moments of wedding preparations, Svadba unfolds in non-linear ways.

Characters include bride-to-be Milica, maid of honor Ljubica, and family elder Lena who leads the events of the day. Bridesmaids Danica, Nada and Zora carry out the celebratory rituals with friendship and enthusiasm. The women make the most of the wedding eve, adorning the bride’s dress, dyeing her hair, making food, picking flowers for the procession, and taking time for carefree fun on the beach where the wedding will be held. Sokolović describes the group as “distilling magic and fantasy from ordinary moments.”

Sokolović says she was intrigued to write about a wedding and its prenuptial rituals because they occur in nearly every country. “Weddings are an important turning point in many women's lives, with emotional and joyful moments,” she says. “I wanted to explore these themes, in a place where we are privy to private and ancient rituals between a bride and her girlfriends.”

Artists providing vocals and musical accompaniment include Chabrelle D. Williams singing the role of Milica the bride-to-be, Brianna J. Robinson as Lena the elder, Maggie Finnegan as Danica, Mack Wolz as Zora, Vera Savage as Nada, and Hannah Ludwig as Ljubica. Full biographies of the music artists are available here.

Stanford Calderwood Acting General & Artistic Director Bradley Vernatter says Svadba offers another distinctive take on the company’s aim to bring new perspectives to opera storytelling, and expand its audiences. “Ana’s music creates a transcendent sound world unlike anything else I’ve heard in contemporary opera,” Vernatter says. “We had the opportunity to interpret this sweet, emotional and universal story through the intersection of music, dance, design and film. ‘Svadba’ lets us escape into a whole other world and celebrate the beauty of togetherness.”  Vernatter says the partnership with Opera Philadelphia expands BLO's reach and “gives us a chance to co-produce with a sister organization doing equally forward-thinking work for the screen.”

David B. Devan, General Director & President of Opera Philadelphia says his company had an artistic triumph with a live U.S. premiere of Svadba several seasons back, and was eager to revisit it in this new form. “When we presented a site-specific production of Svadba in 2013 it was the sold-out hit of that season,” Devan says. “Audiences marveled at its intimacy, and how the singers use their voices -- individually and in unison -- to create a unique, intoxicating work of art. We are so happy BLO invited us on the journey to bring Svadba to our audiences once again in this stunning cinematic production.”

Svadba debuts January 28, 2022 on BLO’s operabox.tv and the Opera Philadelphia Channel (operaphila.tv) streaming services. On-demand viewing is $15. Subscribers to either service may access the film two days earlier on January 26.

Operabox.tv and the Opera Philadelphia Channel are available on branded apps found on Apple, Android, Amazon and Roku platforms.