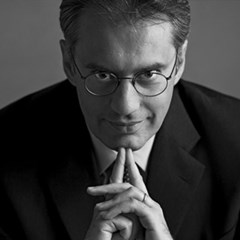 Corrado Rovaris made his Opera Philadelphia debut in 1999 and was appointed as the company's first Music Director for its 30th Anniversary Season in 2005.

Born in Bergamo, Italy, Maestro Rovaris graduated from the Conservatory of Milan with degrees in composition, organ, and harpsichord. From 1992 through 1996 he was the Assistant Chorus Master of the Teatro alla Scala and made his debut on the podium with Il filosofo di campagna by Galuppi in a production by AssociazioneLirica e Concertistica Italiana. He subsequently had the chance to conduct at theSerate Musicali in Milan, the Maggio Musicale Fiorentino, the Teatro Regio diParma, the Teatro Regio di Torino, the Arena di Verona, the Teatro Comunale diBologna, the Teatro Lauro Rossi in Macerata, the Festival delle Nazioni of Città diCastello, the Festival of Cremona and the Praga Europa Musica 1995.

Following the great success of his 1997 debut at the Rossini Opera Festival of Pesaro with Il SignorBruschino, Maestro Rovaris was invited to inaugurate the 1998 season of the Rossini Festival conductingOtello. He continued to garner praise in the 1998-1999 season conducting Il turco in Italia at the Teatro Regio di Parma, La serva padrona in Florence, The Barber of Seville in Cagliari, Dido and Aeneas at the Accademia Nazionale di Santa Cecilia in Rome, and two symphonic concerts with I Pomeriggi Musicali Orchestra and with the Orchestra dell'Accademia Filarmonica della Scala.

In 1999 he made his debut with Opera Philadelphia conducting The Marriage of Figaro. That season he also returned to Verona for Don Giovanni, conducted La cambiale di matrimonio at the Opéra de Lyon,Luisa Miller and Rigoletto at Théâtre Municipal de Lausanne, The Barber of Seville at the Oper Frankfurt, and Il Signor Bruschino at the Teatro alla Scala.

His 2000-2001 Season included The Barber of Seville at Teatro Regio di Torino, Teatro Comunale di Bologna and the Teatro alla Scala, where he also conducted The Italian Girl in Algiers. He appeared on the podium at the Teatro Valli di Reggio Emilia for The Elixir of Love, which he later conducted at the Teatro dell'Opera di Roma and at the Teatro Comunale di Bologna. He returned to Lausanne for Luisa Miller and La bohème, and to Garsington Opera Festival for La Gazzetta. Maestro Rovaris conductedCosì fan tutte in Trento, Rovigo, Bolzano and at the Teatro Regio di Torino, and Don Pasquale at the Teatro La Fenice di Venezia. He has recently taken part in The Italian Girl in Algiers at the Japan Opera Foundation in Tokyo, in Simon Boccanegra for the season opening of the Santa Fe Opera Festival, and has returned to the Théâtre Municipal de Lausanne to conduct Il Signor Bruschino and Gianni Schicchi.

Maestro Rovaris returned to Philadelphia to conduct Don Giovanni in 2002 and La traviata in 2004. The 2004-2005 Season marked an important year for the Opera Company of Philadelphia; it celebrated its 30th Anniversary Season and appointed Maestro Rovaris as the company's first Music Director. Since then he has conducted a majority of the Company's productions.

Since making Philadelphia his home, Corrado Rovaris continues to enjoy international success with performances of L'italiana in Algeri at the Japan Opera Foundation in Tokyo, Simon Boccanegra for the Santa Fe Opera Festival, and has returned to the Théâtre Municipal de Lausanne to conduct Il Signor Bruschino and Gianni Schicchi. Recently, he has conducted Il turco in Italia at the Teatro Regio di Torino, Li Finti Filosofi at the Pergolesi Spontini Festival, and concerts in Bruxelles, Lausanne and Ancona.