When the curtain rises on Breaking the Waves, the months and years that went into the production, from concept to construction, will finally be brought to fruition.

Undoubtedly many opera fans know how hard singers and musicians work for performances like these, expanding their repertory or even work-shopping a brand new role, practicing for hours on end.

But opening night is an incredible experience for opera’s offstage heroes, too. In addition to the performers on stage and in the orchestra pit, our composer and librettist, director, set designers, plus a large team of production managers, stagehands, prop masters, carpenters, electricians, and more, have brought this vision to life.

After all, a world premiere requires both the sheer muscle of bringing an opera to the stage in the 21st century, plus the creative ability to think it all up in the first place. Though Breaking the Waves has been adapted from film, there are no prior stage productions to look to, no classic recordings to reference. Designers can look to the film for insight, but there are no readymade costumes to borrow or sets of the Scottish Highlands to rent. It’s all made from scratch.

So, where does it all start? 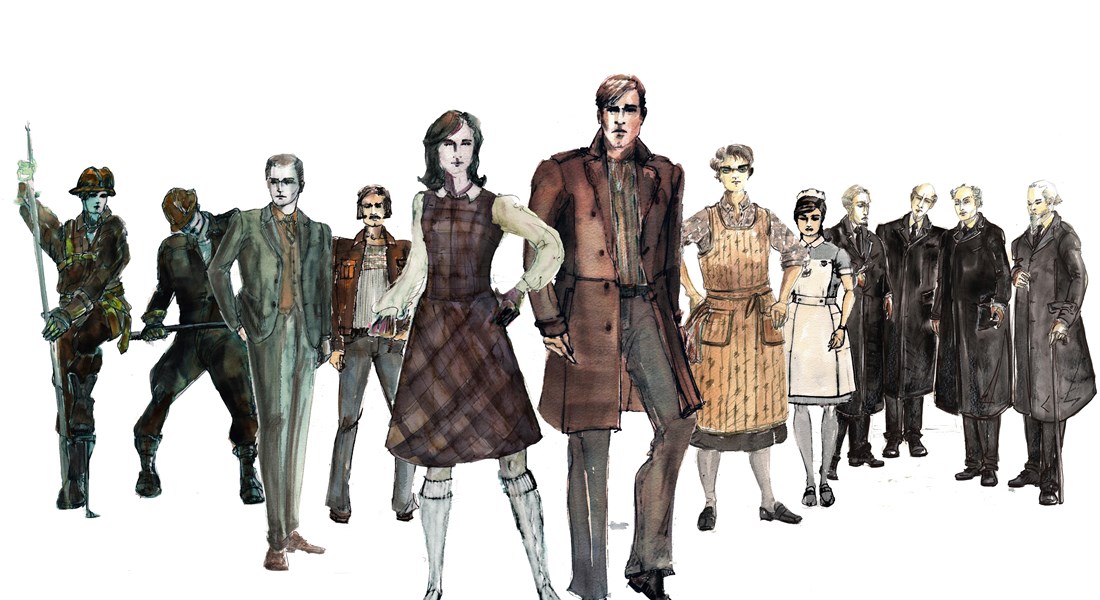 For projection designer Adam Larsen, his cinematic creations begin with the music.

“I’m very much inspired by music,” Larsen said. “I’m very visual and I love imagining – this is even before there’s a set design or anything like that – I’ll just listen to the music and see what images are conjured up for me.”

“When I draw, I often have the music playing because I want to be the conduit, a visual conduit. Hearing the music, looking at my research in front of me and drawing what I feel, as opposed to what I’m seeing,” she said.

From there she draws each costume, consulting with the director to make them just right, possibly redrawing them in the process. Then comes the cycles of fittings, fabrication, and alterations.

For set designer Adam Rigg, who grew up as a ballet dancer before turning to design, his process really begins with just walking around, exploring spaces out in the real world.

“I think because of my dance background I immediately – which I think is a little bit stranger than most designers – I immediately think space and scale,” Rigg said. “That’s my first impulse. A lot of designers and a lot of programs urge you to jump into visual research mode, but I tend to actually go find spaces and to walk around spaces. I try to sense scale. How many bodies? What is the relationship of bodies to space?”

For Breaking the Waves, that meant discovering two places that intrigued both he and director James Darrah: the white, blank rooms of art galleries and the foreboding concrete sea walls used to defend coastal lands. Then comes the visual research and gathering of images before drawing and building set models and, eventually, construction.

Larsen also found inspiration by the water. His film projections forthis production, shone by four projectors onto the set and its inhabitants, are inspired by images of ink in water and watercolors. When planning his projections, Larsen, whose background is in cinematography, goes through hundreds of images before deciding on ones that fit the mood of the show. He then collages these images together with footage of water, ink, sky or even the singers themselves to create an atmospheric effect.

“The [Breaking the Waves] set is an amazing canvas for the projections, but it’s also just a very striking piece of architecture,” Larsen said. “It will work well being lit and it will also work well being projected upon. I love surfaces like that that aren’t screens, per se.”

Karvonides’ creations will live in this world of imposing walls spattered with inky textures – and her garments certainly get in on the messy fun.

Despite working in completely different media, Larsen, Rigg and Karvonides all found inspiration in Darrah’s unique approach to storytelling, and how he, librettist Royce Vavrek and composer Missy Mazzoli brought out the emotional core of Breaking the Waves.

“James is brilliant at finding ways to tell the story and pare it down to the essentials, I feel, and to contemporize things,” Larsen said.

“It’s all very well calculated and conceived that it becomes a new experience, especially appealing to young audiences but not dismissive to an older audience,” Karvonides agreed.

The journey to opening night was a long one for the whole cast and crew, but their enthusiasm for the project is easy to spot. It’s not every day you get to design a world premiere, you know.

As Rigg put it, “You have this totally out of left field source material, I think, for an opera, which is exciting…but then you put Missy on top of that and how exciting she is.... You don’t get a lot of projects like that.”

Hear from the creative team behind Breaking the Waves LIVE at Designing a World Premiere, a panel discussion, Wednesday, September 21.