Two Kinds of Miracle: The Marriage of Figaro

Le nozze di Figaro–best translated as “Figaro’s Wedding”–is two quite distinct kinds of miracle at once. Here, on a superficial view, is the epitome of the artificial eighteenth-century opera buffa plot, replete with intrigues suspected and real, complete with young-man role for female singer, and culminating in a night-time garden scene that outdoes all rivals with its mêlée of mistaken meanings and identities and of selectively overheard asides. Yet it was this same piece of theatrical clockwork that led Bernard Shaw, invoking the spirit of Shakespeare himself, to celebrate Mozart as “the most subtle and profound of all musical dramatists.”

In terms of its artificiality and the built-in minor unlikelihoods of its plot, Figaro is as hard or as easy to take as any opera. Once you have accepted the basic convention that singing is the characters’ natural everyday mode of expression, the other more localized conventions follow readily enough. It is the dramatic depth, the human truth, of their application here that makes the result unique.

The cauldron of forces that justifies such an evaluation seethes on two levels–political and personal. Mozart’s opera, first performed in Vienna on 1 May 1786, was composed to a libretto by Lorenzo Da Ponte based in turn on Beaumarchais’s play La Folle Journée ou Le Mariage de Figaro, first publicly produced in Paris only two years earlier. A thoroughly topical piece, it was also, for the 1780s, a politically revolutionary one: the aristocrat is the villain, and he is bested by a pair of servants who surpass him as much in real nobility as in intelligence and self-control. 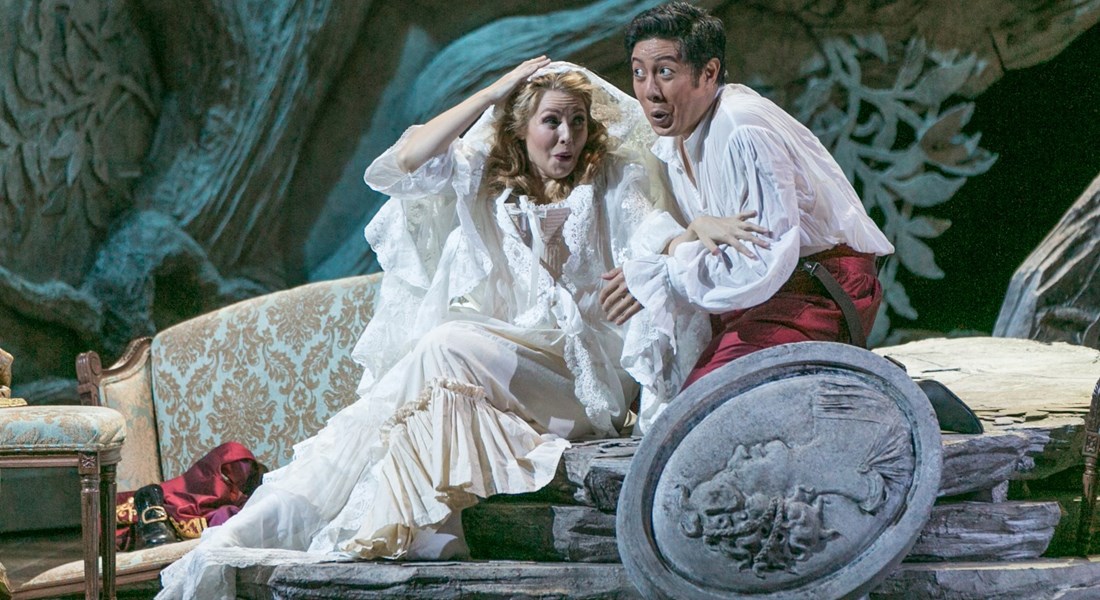 Because of the perfection of Mozart’s musical manners, it is easy to overlook the subversive trend of his work. Yet Figaro is, in its more polychromatic human complexity, as radically egalitarian a work as that more obviously revolutionary tract, Beethoven’s Fidelio. Both operas, interestingly, begin on a deliberately prosaic note: Susanna is trying on a hat, Marzelline (no relation of Mozart’s Marcellina) will be doing the ironing. In both, long before the end, that note will be vastly intensified and transcended. It would be a mistake to think that Beethoven’s intensification, because of its clearly heroic and tragic tone, is of a higher order than Mozart’s. Tragedy is not a higher, nor for that matter a lower, form of art than comedy; it is merely different.

It is when we compare it with another no less different opera–Rossini’s Il barbiere di Siviglia (composed thirty years after Figaro, and two years after Beethoven put Fidelio in its final form–that the stature of Mozart’s work emerges most strikingly. Figaro is based on the second play of Beaumarchais’s trilogy, Il barbiere on the first. Rossini’s sparkling opera does indeed constitute something like the apotheosis of the buffa tradition. Figaro, by contrast and significantly, is not labeled an opera buffa but a commedia per musica. The designation signifies the greater seriousness of the aim, even while it alludes to the characters’ ancestry in the old commedia dell’arte. Beaumarchais’s Le Barbier de Séville, a relatively innocent play, was the ideal springboard for Rossini’s uncomplicated effervescence. By the time the author came to write his Mariage de Figaro, the poison had entered the system–or, to put it another way, it had come to the surface, in an obviously dangerous story that gave Da Ponte as many problems with the censor as it offered Mozart opportunities for a really ambitious composition.

The germ of Figaro’s operatic impact, then, is to be found in Beaumarchais. But just as Beethoven realized that the best way to convey the message of universal brotherhood was by concentrating on an individual drama, so Mozart, in his opera, elevates the socio-political puppets of the play to the status of human beings by underlining their personal attributes. Da Ponte, an excellent librettist, began the process. Starting out from a play that has been aptly described as closer to journalism than to art, he subtilized almost everything he touched. 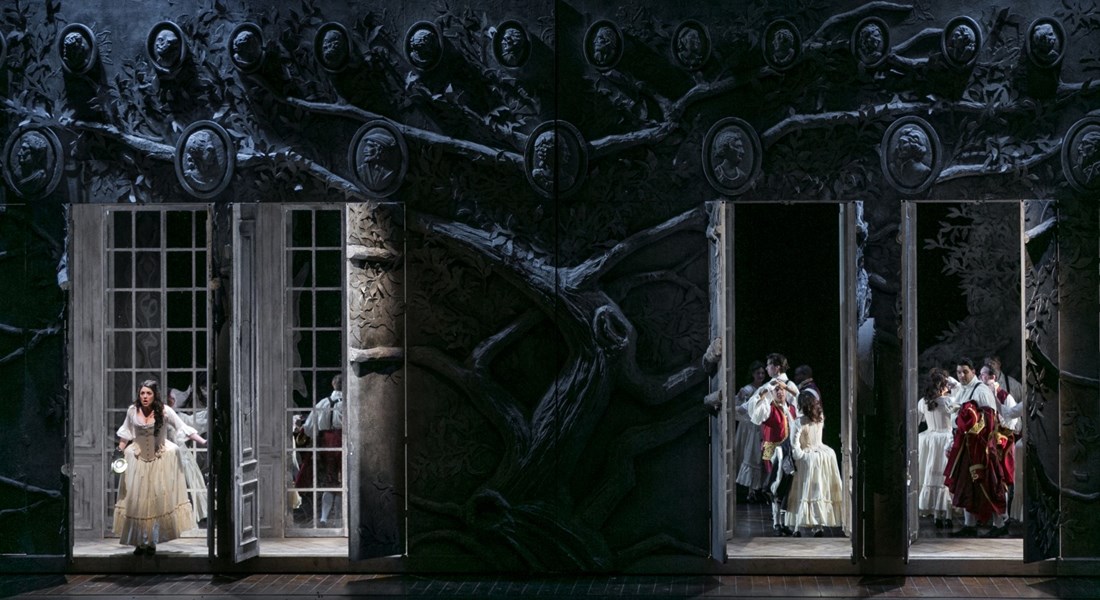 Still, the main achievement is undeniably Mozart’s. Quite apart from his probable role in shaping the libretto itself (and he was working in direct contact with Da Ponte, so that there is no equivalent to the Strauss-Hofmannsthal correspondence to furnish clues), it is preeminently through the music that the characters take on their unparalleled vividness–that they pass, indeed, beyond the sphere of “characters” in any sense and become people.

Mozart, who never lived to be middle-aged, was thirty when he composed Figaro. It is a work in which youth is unmistakably opposed to age, and in which the composer’s allegiance to the side of youth is as unmistakable as his enthusiasm for the hoped-for new social order. It is through the music, much more than through the text, that the youth of almost all the central characters shines out: Figaro, who is thirty like his composer; Susanna, a decade younger; the Countess, often portrayed in rather matronly guise, but according to Beaumarchais only nineteen; and Count Almaviva, who has moved only three years–though an infinity of weary self-indulgence–on from the dashing blade he was in Le Barbier.

Even more crucially, it is music’s power of characterization that breathes life into the still younger figure of the page, Cherubino, who stands outside the central relationships but is yet a mainspring of the plot. He is a personage as perceptively drawn as any in the drama. His obsession with “love” recalls Keats’s “space of life between” the healthy imagination of a boy and the healthy mature imagination of a man. As comprehensively as Strauss’s Octavian, he is the quintessential operatic adolescent. Some commentators have likened him to the young Don Juan, but he is more human. A better, more pertinent parallel would be with the young Almaviva himself: why should that plausible specimen of woman-chasing manhood be reduced to paroxysms of jealous rage and neurotic self-doubt if not because he sees, in Cherubino, the next generation of specialist charmer treading on his heels?

Alfred Einstein accurately isolated the central facet of Mozart’s operatic greatness when he spoke of Figaro’s unsurpassed “mastery of the counterpoint of characterisation.” He went on to observe: “Let the attempt be made in the quintet of Die Meistersinger to separate Magdalena and David from the general G flat major bliss at the end of the scene: it will not succeed. Mozart never made such mistakes, never sacrificed a character.” The unusual prevalence of ensemble writing in Figaro both follows from this gift of differentiation and gives it scope. The score includes one sextet, two trios, and no fewer than six duets; and when to these are added the finales of the last three acts–especially the voluminous ones of Act II and Act IV–the preponderance of multiple-voice over single-voice music is clear (even when, as rarely happens, Marcellina’s and Basilio’s additional last-act arias are included). Einstein’s point, in the last sentence quoted above, is valid in spirit but does not quite do justice to the variety of Mozart’s method. In his invaluable book Three Mozart Operas, Robert Moberly rightly points out that, for all the fundamental importance of vocal differentiation, “undifferentiation, in Mozart’s mature operatic work, is a deliberately different way of conveying drama.” He instances the similar melodic lines given to Marcellina and Susanna in their Act I skirmish, “a polite fight in which the veneer of civility is preserved,” and, more tellingly still, the Act II trio for the Count, the Countess, and Susanna, which is, he argues, “primarily a duet between two people who have loved–and still love–each other very much. They are trying to moderate their quarrel. With the thudding anxiety and tension, there remains a desperate desire to observe the forms of politeness as far as possible. It is music which suits the drama of husband and wife telling each other in identical words to be careful, because the scandal will be embarrassing.” 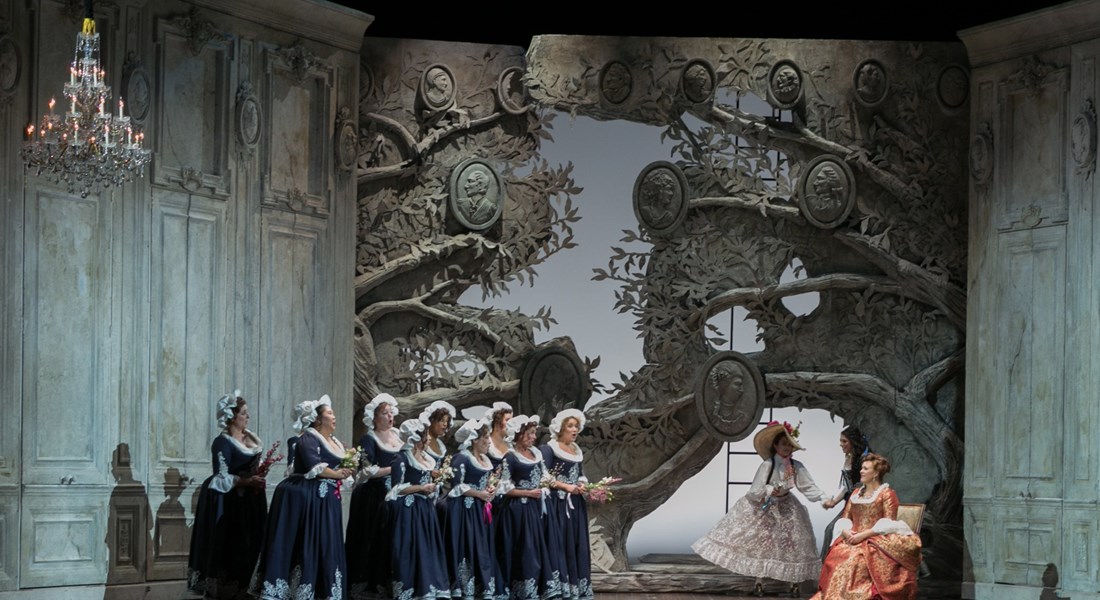 Apart from all the subtleties in his illumination of personal feeling through the vocal line, Mozart the dramatist has ample further means of characterization at his command, without ever having to resort to any such crude device as the Wagnerian Leitmotif was to provide. Prominent among these resources is the carefully pointed use of orchestral color. The frequent association of the bassoon with the Count’s amorous vein is an instance, typically Mozartian in that is it never reduced to systematic, and thus automatic, response. The special treatment of Mozart’s favorite woodwind instruments, the clarinets, is worth noting too. As he was later to do even more emphatically in Così fan tutte, he links them in Figaro with particular persons and moods. The immediate sense of greater warmth and new depth that they produce at the Countess’s first entry–delayed by Da Ponte and Mozart from its position in Act I of the play to Act II for a heightened effect–is enhanced by the fact that they have been heard little since the overture. Of the nine set pieces in Act I, clarinets are used in only two: the trio “Cosa sento!”, in which their role is texturally subordinate, and Cherubino’s first aria “Non so più cosa son,” whose atmosphere is, as it were, a preliminary hint of the sensuousness that it to bloom fully in the Countess’s music.

Less subtle, but just as effective in its direct way, is Mozart’s unblinking exploitation of the conventional symbolism of the horn. He evokes no Tennysonian horns of Elfland, but rather the brutal, age-old code-sign for cuckoldry. And the symbol can work as well by deliberate omission: at the end of the opera, when all the couples are united and bitterness and suspicion have been banished, the wind band makes its last appearance denuded at first of the horns with apparent musical perversity but perfect psychological aptness.

Along with this unfailing sensitivity to character and situation at every level from the exalted to the apparently banal, Figaro shows its composer as deft as anywhere in symphony, sonata, or concerto in his handling of the purely musical forms that were the basis of his instrumental style. The structure of Figaro’s cavatina, “Se vuol ballare,” beautifully exemplifies Mozart’s fusion of characterization with flawlessly proportioned “abstract” form: the 2/4 Presto (beginning with the words “L’arte schermendo”) seems at first glance to be dashing off in a new musical direction, but it is in reality a fairly strict variation on the main 3/4 melody of the song, and so underlines the singleness of purpose with which Figaro is planning his defeat of the Count.

Such examples could be redoubled in almost all the set pieces. Yet it is outside the sphere of formal musical design, and independently of instrumental support, that the opera Le nozze di Figaro and its mercurial hero reveal their hearts most movingly. “O Susanna! Susanna,” Figaro laments in his Act IV recitative “Tutto è disposto.” It is a harrowing cry put forth all alone in the night, when the true lover thinks he has been played false. Such a moment is the surest proof that the apparent artificiality of this supreme human comedy is indeed merely apparent. And only the profound musical dramatist of Shaw’s encomium could in the space of a few minutes have moved without anticlimax from this to the brilliant festivities of the opera’s conclusion.