We knew from the beginning that “re-imagining” meant we wouldn’t tamper with the thrilling La voix humaine. How does one improve on Poulenc’s setting of what still feels like quite a bold theatrical statement and experiment--a compelling human drama not exactly screaming for a directorial tinkering? What we did also accept was that, at its best and most compelling, La voix humaine is a personal, simple, direct piece that requires intimacy and delicacy but...is not set within a nightclub. Utilizing this space for O18 has meant the creative team chose instead to create a world--an entire environment and evening that could be plausible for the narrative of La voix, and not simply relegate the work to a makeshift proscenium, shoving an orchestra into a corner somewhere. The challenges have all been interesting: how does one imagine La voix in a club environment? How can we make sense of the use of piano only? How can we create an evening of song and text but mesh it with an opera in a visual world? 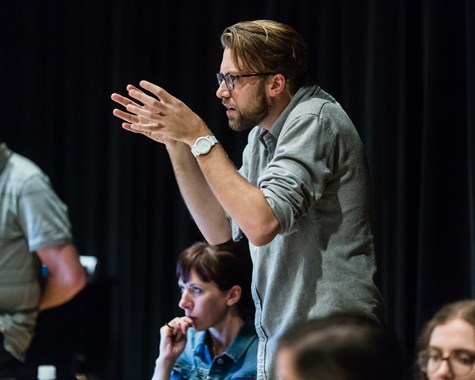 As La voix humaine is presented second, without alteration, we’ve crafted a prologue that takes place within a larger Cocteau Universe of our own design. This evening’s opening has led all of us on a journey into Jean Cocteau’s staggeringly varied and wildly mixed creative (and personal!) life, Poulenc’s settings of texts from Apollinaire, and the larger world of Cocteau’s character, film, and visual output.

We’ve therefore attempted an expansion on the opera that leaves one to draw their own conclusions and hear some of Poulenc’s staggeringly beautiful art songs. It’s an ongoing partial homage (with plenty of hidden gems) but with our team’s own choices and responses to Poulenc’s music guiding the way and bridging the halves. If you immerse yourself freely in the world of the Prologue, we hope you’ll find new discoveries within the subsequent La voix humaine. If you find the notion of adding anything sacrilegious—we’ve attempted to leave room for doubt as well and have each half of the evening stand on its own.

For tonight’s inclusion of actors, we’ve drawn intentional inspiration from Cocteau’s Les Enfants Terribles. The fascinating Paul and Lise of that story cross the canon of his body of work and are reincarnated in our world. We’ve been faithful to Cocteau’s own creative design and drawn characters he’d hopefully recognize while also allowing them to mature and act out in a different decade. (Again, responding to our environment...corded phones, party lines and operators needed to be plausible.) Our siblings in the prologue are still fascinated with a dangerous “game,” and grow increasingly worrisome in their commitment to the psychological warfare of Cocteau's story. They here ensnare our young student in their poetic allure with questionable motives. Paul and Lise also speak to each other in Cocteau and Apollinaire poems, quote Godard films, handle mirrors, roses, time, gloves, and are the catalysts for a deeper, darker surprising subtext about desire and retribution.

By the time the evening reaches La voix proper, we’ve left some of the lingering questions about this voice on the other end of Elle’s phone line still unanswered. Perhaps some might disagree with any added context or instead find themselves embracing abstraction—but therein lies the genius in Cocteau’s characters: we shouldn’t ultimately really know what is motivating this other person in explicit detail. The sensory experience of La voix humaine is what we have worked to celebrate and expand.

On a personal note, it is worth mentioning Ne Quittez Pas has heavily evolved, changed, adapted, and emerged all within the few weeks we’ve been working within the framework of Opera Philadelphia’s O18. Such freedom, the space to create and collaborate while within the pulse of what this festival continues to create for the future of opera, has felt the most exciting aspect to share this evening.