From Bergamo to Benjamin Franklin

"Donizetti has always been in my heart."

The connections run deep between Corrado Rovaris, Opera Philadelphia’s Jack Mulroney Music Director since 2005, and composer Gaetano Donizetti (1797-1848). Rovaris has conducted around the world, globetrotting from Teatro alla Scala, where he was assistant chorus master in the 1990s, to his adopted home of Philadelphia, to the Santa Fe Opera, where I spoke to him one July morning as birdsong wafted into his environs. Through decades at the podium in the U.S., Germany, Italy, Japan, and many other international locations, Rovaris has earned accolades from artists and audiences for his ability to both develop new operas with fresh compositional voices like Kevin Puts (Elizabeth Cree) and Daniel Schnyder (Charlie Parker’s YARDBIRD), while also invigorating the classic repertoire of Verdi, Puccini, and Rossini. 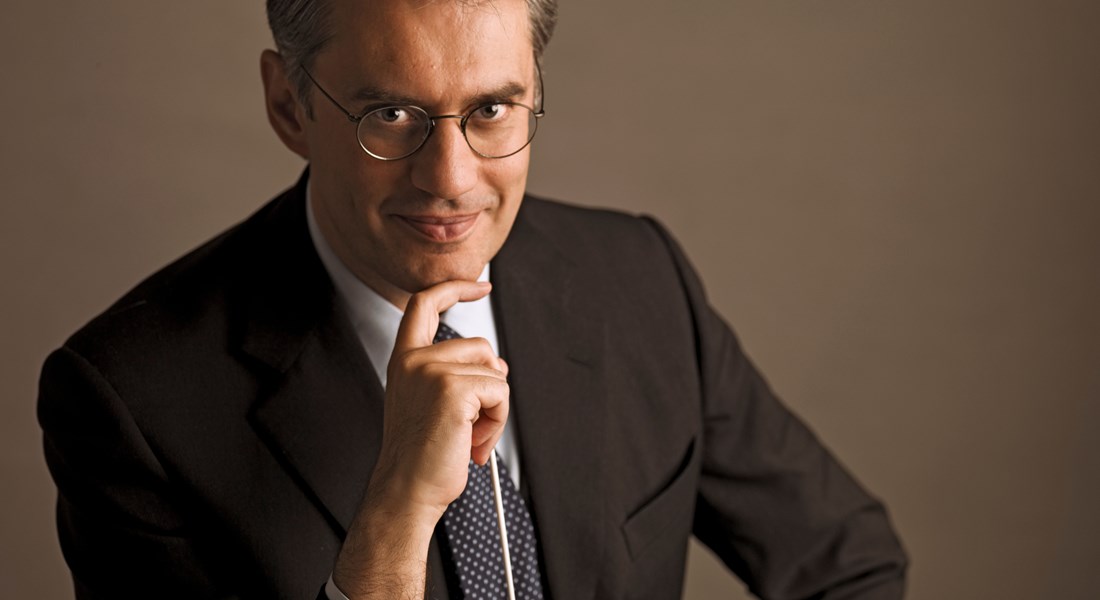 Corrado Rovaris has a special connection to Donizetti, having grown up in his native Bergamo. Credit: Photo by Gabello Studios

Growing up in Donizetti’s native Bergamo, Rovaris was exposed to works like The Elixir of Love and Don Pasquale at an early age. By age 14, when he left home for Milan to study composition, organ and harpsichord, the seeds were sown for a lifelong bond. Rovaris returns home each year on Donizetti’s birthday (November 29) to lead an emotional tribute to the late, great composer where he is interred at Basilica of Santa Maria Maggiore.

"Donizetti wrote about 75 operas but only a few of them have remained in the standard repertoire,” said Rovaris, speaking on Lucia di Lammermoor's lasting impact. "Lucia is really the typical romantic opera, with madness, and the dynamic technique of a soprano.

“Usually operas were very staid in the 19th century," he went on. Lucia di Lammermoor was an exception, one that really rocked opera houses at the time. "You can’t forget it. It has been always very present in the seasons all over the world."

The new production from Opera Philadelphia and Wiener Staatsoper premiering in Festival O18 comes with a particularly Philly-centric bit of music trivia involving one of the city’s favorite sons, Benjamin Franklin.

The glass harmonica, or armonica as it is also known, is one of the most fascinatingly odd instruments ever invented. Marie Antoinette played it. Marianne Davies and her sister, soprano Cecilia Davies, performed with it as a duo publicly around Europe as the American colonies were headed toward revolution. Beethoven and Mozart composed for it. And Philadelphia’s own Franklin is its founding father. An old, beaten-up version (it is said his descendants and their children took delight in smashing some of the glasses) is owned by the Franklin Institute Science Museum, where it gets pulled out of its display case for the occasional birthday tune. 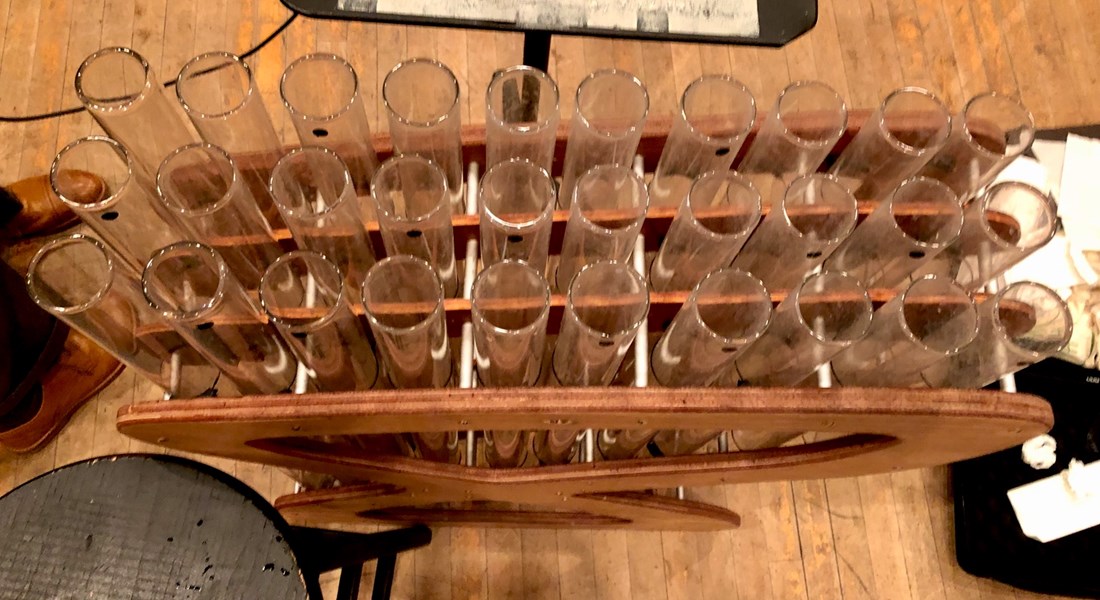 Donizetti composed Lucia di Lammermoor with Franklin’s instrument in mind, seeking an otherworldly sound for several of his title characters arias and one key scene in particular. The glass harmonica has come to be associated with derangement, mental instability, and frightening sadness, a perfect match for Lucia's manic spiraling. So why do most Lucia productions feature a flute solo during the famous “mad scene?”

“Donizetti wrote this opera for the glass harmonica and during the last rehearsals in Naples, there was a management problem and the [glass harmonica player] left,” explained Rovaris. “The glass harmonica is so peculiar and so specific but it is impossible to replace. Donizetti had to give it to the flute player as a last-minute solution.”

Of course, the glass harmonica has cultivated some particularly incredible lore over time. All the more important for a scene like Lucia’s post-marital madness to be accompanied by an instrument characterized by its mythology of insanity. German musicologist Friedrich Rochiltz wrote in a popular European music periodical that the armonica was not to be played by those with a nervous disorder or morose disposition.

“This kind of sound, it almost boggles the mind,” explains Rovaris. “Donizetti really wanted to describe the madness of Lucia, so that’s why it’s really important - if you don’t use the glass harmonica, you miss the most important characterization in the score. It’s the most interesting thing in the Lucia score because it’s really so modern to be able to describe what’s on stage with the sound.”

Brenda Rae, singing the title role in Philadelphia, is no stranger to Rovaris, the glass harmonica, the production’s dynamic director (French superstar Laurent Pelly, named Best Director at the 2016 International Opera Awards), or the opera’s famed “mad scene.” Her connection to Lucia as a character goes all the way back to her college days, when she thought she was headed more in the singer-songwriter or jazz singing direction. Rae’s first exposure to Donizetti and the character of Lucia came through Anna Moffo’s popular collection of opera performances, La Bellisima, given to her by a music teacher.

“I would just listen over and over again, I was so in love with it,” she explained from Wisconsin, on a break between Pelly-directed performances of Leonard Bernstein’s Candide in Santa Fe. “Whenever I sing this piece, it reminds me of why I decided to focus on being an opera singer.”

While this is her fourth time embodying Lucia, she is positive that even regular opera-goers will be floored by this unique production. “The glass harmonica is something that most of the audience won’t be familiar with and the sound is so incredibly haunting. It immediately transports you - ‘Oh, something is wrong here,’” she expects audiences to think. “It’s so ghostly. If people are thinking ‘I’ve seen Lucia before, so I don’t need to go’ - this changes the mad scene completely.”

Rae says she is spoiled with the freedom and interpretive license she can take with the famous soprano solo. “She’s not really seeing what’s in front of her,” she explains. In previous productions, Lucia’s wedding night nightmare is compounded by loads of fake blood, perhaps a dripping dagger, and her looming death is greatly debated - does she die of sadness or internal bleeding or mania? “She’s retreated into her own head space and experiencing past things. A word that I like to remember is freedom - she’s unleashed.”

Rae is delighted to duet with Friedrich Heinrich Kern, a glass harmonica player with whom she worked alongside Rovaris in a different 2017 Santa Fe production. “The player has to be aware of what’s on stage. Hopefully, we’ll have it set up so that he can see me and he’ll have to use his ears and it might go differently depending on how I’m feeling - he has to react to that, too.”

That certainly sounds like a production of Lucia di Lammermoor that must been seen to be believed.

Bill Chenevert is a freelance writer based in Philadelphia. His first opera was The Barber of Seville, conducted by Corrado Rovaris.