Commonwealth of Pennsylvania vs Don José

It wasn’t an average murder trial. The lawyers and jury saw the crime unfold. They watched intently from red velvet seats as the woman was killed and the man holding the knife fell to his knees, admitting his guilt.

Then they applauded as the curtain fell and the perpetrator and victim reemerged to take their bows. 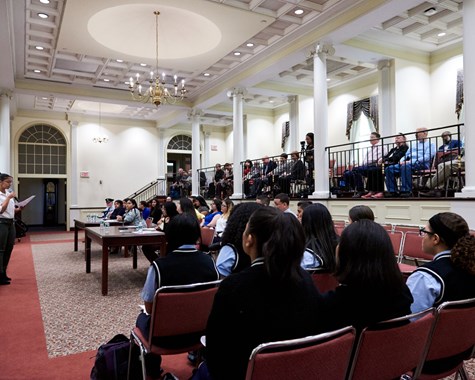 Although a trick of acting and stagecraft, the case at the center of the Esperanza Academy Charter School mock trial was somehow more real than others the students had worked on before. The case didn’t just exist within a packet of papers, it played out in front of them – at the opera, no less.

In 2017, Michael Bolton, Vice-President of Community Initiatives at Opera Philadelphia, had a lightbulb moment: Why not create a crime scene of Carmen, the upcoming spring production?

In fact, why not do a mock trial and use the opera to teach students about the legal system?

“Initially team members were maybe intimidated by this process because it was so foreign,” Bolton said.  But he encouraged them: “This is creativity time. It’s really an opportunity to let right brain and left brain work harmoniously.”

Opera Philadelphia already had a relationship with Esperanza Academy, so when Bolton discovered they had a mock trial class, the stars aligned.

“We were really excited about the idea,” said Mock Trial teacher Kyle Riley. “Part of it has to do with the idea when we do mock trial, it really is acting.”

Usually mock trial cases are about whether the defendant committed the crime or not, Riley said. But for a crime that took place before an audience of 2,700, it became a question of Don José’s mental state.

The community initiatives department scoured the Pennsylvania Bar Association website, creating mock trial packets for The Commonwealth of Pennsylvania vs. Don José and writing witness statements with the help of teaching artist Karina Sweeney, who went to Esperanza repeatedly to work with the students.

The Mock Trial Class studied the packet and the story, but it was the next steps that really resonated with them, when they attended a dress rehearsal performance and visited the scene of the crime on the stage of the Academy of Music.

For Julianis Ramos-Ramos, exploring a crime scene for the first time – even if it was contrived from the confetti-strewn remnants of Act IV, a prop knife, and fake blood – was a highlight.

“I personally want to be a crime scene investigator, so it was a more personal view of what I want to do in the future,” she said.

The crime scene investigation taught Opera Philadelphia a lesson, too: Never underestimate the laser-sharp observation skills of teenage mock trial students. A randomly-selected knife turned out to be a specific type of knife – a knife meant for stabbing, not slashing – leading the defense to use it to question Don José’s intent. 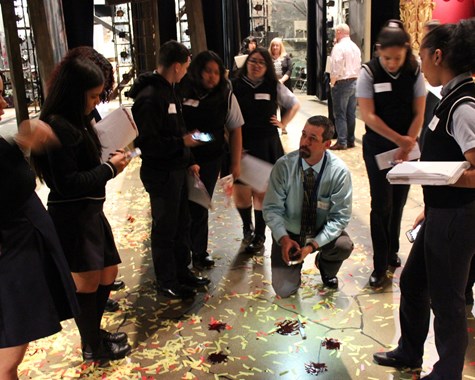 Then there were the footprints.

They finally convinced the teens to forget about the footprints, pleading “we just bought them at Halloween Adventure.”

The students were displaying the same critical thinking skills Bolton had witnessed at the Carmen dress rehearsal when he checked in with them at intermission. He could tell they weren’t just enjoying the performance, they were probing it for clues. 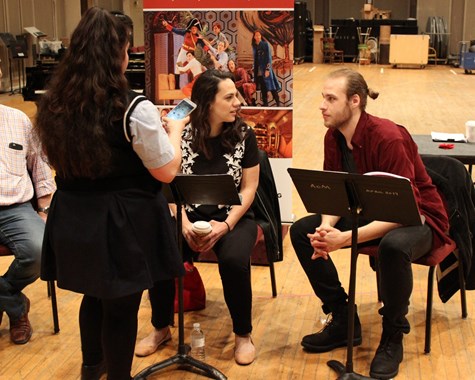 Just as visiting the crime scene put the students in their clients’ shoes, seeing the opera and meeting with the stars, Daniela Mack (Carmen) and Evan LeRoy Johnson (Don José), put them in their clients’ heads.

“It kind of gave me more of a sense of who he was, the way he interacted with other characters, especially Carmen,” said Rosa Sanchez, who was a lawyer for the prosecution, about watching Johnson’s portrayal of Don José at the dress rehearsal. “You could quite see his obsession.”

Six weeks of work culminated in a mock trial held in a courtroom at Temple University’s Beasley School of Law. This was the best part of the process for most of the teens, a chance to feel like a real lawyer.

Tom Zemaitis, a retired trial lawyer who acted as the judge, also happened to be a fan of Carmen.

It was interesting, he remarked, to see these larger-than-life characters portrayed as regular people in a court setting.

He could see the students had worked hard, he said. “They asked thoughtful questions. Sometimes they were surprised by the answers, but that happens in a courtroom, so they got a taste of what it’s like.”

The defense made a case that Carmen had manipulated Don José and driven him to insanity, but the young women who made up the jury, having grown up in the #MeToo era, weren’t having it. As prosecution lawyer Kimberli Rojas said, “He knew what he was doing and his obsession with Carmen led him to do the unthinkable.”

It was unanimous. Don José was guilty.

Though it was the last day of school for the seniors in the group, many of the Intro to Law students who served on the jury will be taking their place next year in the Mock Trial class.

Would they be interested in trying more operatic crimes? Riley said absolutely.

“The kids started talking about it on the bus back to the school.”

Funding for Opera on Trial provided by The Mazzotti/Kelly Fund - BBH of The Philadelphia Foundation and The William Penn Foundation.