From cooking icon to opera inspiration

How to make Julia Child: 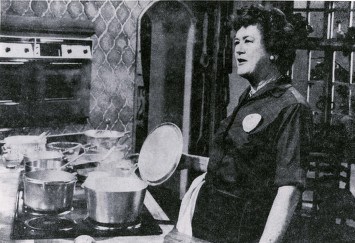 Julia Child in the kitchen

Julia Child was born in Pasadena, California in 1912. Although she would grow to love cooking, her childhood was marked by a lack of culinary flair. Her mother rarely cooked and what few recipes she knew and cooked herself, Julia described as “simple,” like roasts. Julia’s life was charmed—her mother was an heiress, and her father was a real estate investor. With their wealth, Julia was able to attend private schools and go on to Smith College.

After college and the start of WWII, Julia found herself in China working for the OSS (Office of Strategic Services). It was here that she met her husband, Paul Child. After the end of the war, Paul’s job moved them to Paris.

Upon arriving in France, Paul took Julia to La Couronne, the oldest restaurant in the country. This was Julia’s first introduction to classical French cuisine, and she fell in love. Wanting to learn more, Julia enrolled in the acclaimed Le Cordon Bleu.

In culinary school, Julia was surrounded by men, particularly American men seeking education on the G.I. Bill. This mattered little to Julia—her newfound passion was undeterred despite not belonging. However, there were two other female students that Julia was able to connect with.

Simone Beck and Louisette Bertholle approached Julia to collaborate on a cookbook dedicated to French cuisine. Their target audience was Americans, and Julia provided an invaluable perspective to American women. Julia accepted and committed herself to writing, editing, and testing recipes for the next decade. The end result was The Art of French Cooking, a groundbreaking cookbook that would earn Julia a spot on the bestseller list for five years and a PBS series.

Before The Art of French Cooking, cooking was mundane and taboo, as to cook for oneself was unsophisticated and for lower classes. Through careful instruction of complex French cuisine, Julia was able to bring a sense of class to cooking at home as well as accessibility. People wanted to learn more about French fare and from Julia herself. “The French Chef” would fulfill both desires.

Nothing like “The French Chef” had ever been done before. Cookbooks themselves had rarely been made for ordinary people. Filming someone cook for viewers at home was entirely new territory. Julia meticulously planned each episode, though it often appears as though she is care-free, assuring viewers that there is always a solution to a mistake or that “no one will see.” Off camera, there were crew members holding cards that Julia made that read things like “breathe” or “wipe brow,” and yet she still always sounded out of breath! Julia wanted the show to be perfect. The truth is, that seemingly carefree woman was nervous that she’d make a mistake or the audience wouldn’t like her. 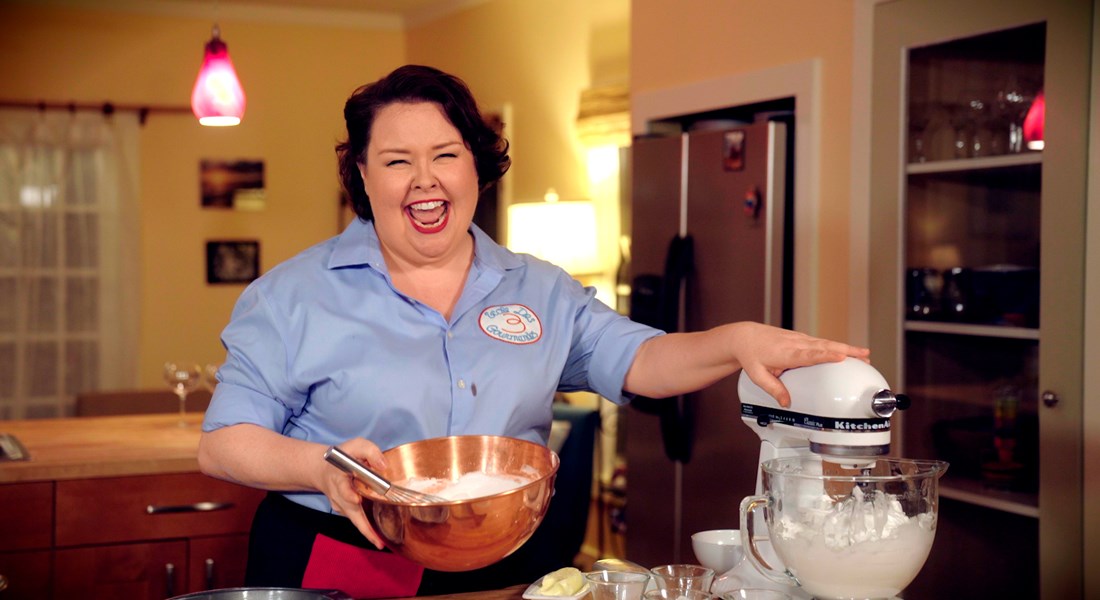 Lee Hoiby’s BON APPÉTIT! embraces these aspects of Julia and “The French Chef.” Sometimes stage Julia seems a bit anxious as she’s whipping egg whites. What if the egg whites don’t get peaks fast enough? Julia Child was likely asking herself the same questions – she did challenge a machine that was sure to succeed. Julia was also prone to mistakes. In one episode, she drops her potatoes on the stove. When making the cake in BON APPÉTIT!, she’s not exactly neat, splattering batter on herself. Imperfection is a part of what makes Julia Child so endearing.

The opera’s Julia Child still provides careful instructions, often bordering on giving viewers more information than necessary. Julia even pauses to give lengthy descriptions about why she likes certain chocolate, or what the cake’s texture will be like, or to simply take a sip of wine and nibble of chocolate.

Although it may seem exaggerated, this is how Julia really would and did act. The libretto for BON APPÉTIT! is taken from two episodes of “The French Chef,” both of which are devoted to Julia making a chocolate cake (La gateaux and a Reine de Saba). The runtime of an episode on PBS is also roughly the same time as the opera, transporting the audience to a place in between television and live theater. You’re watching Julia as she presented herself while still watching an interpretation of her that embraces her vivaciousness.

It is Julia Child’s joy of cooking set to music. Bon Appétit!

Christina Irmen is a senior at the University of Pennsylvania, and was an Opera Philadelphia intern in summer 2020.