Gaetano Donizetti was born November 29, 1797 in Bergamo, Italy. He, Bellini and Rossini were the three great masters of the opera style known as bel canto.

Bel canto operas had set numbers of separate arias and ensembles that featured particularly florid vocal writing designed to show off the human voice to maximum effect. These works demanded great virtuosity from the singers and served as star vehicles for leading operatic performers. Donizetti dominated the Italian opera scene during the years between Bellini's death and Verdi's rise to fame after Nabucco.

Donizetti's musical talents were apparent at an early age, and he was admitted to the Lezioni Caritatevoli school on full scholarship when he was nine years old. The school was founded by Simon Mayr, who had a significant influence upon Donizetti's musical development and helped the young composer launch his professional career. Mayr sent Donizetti to Padre Stanislao Mattei, the teacher of Rossini, for further compositional instruction. Mayr also partially paid for the lessons with Mattei and arranged for Bartolomeo Merelli to write the librettos for Donizetti's early stage works. 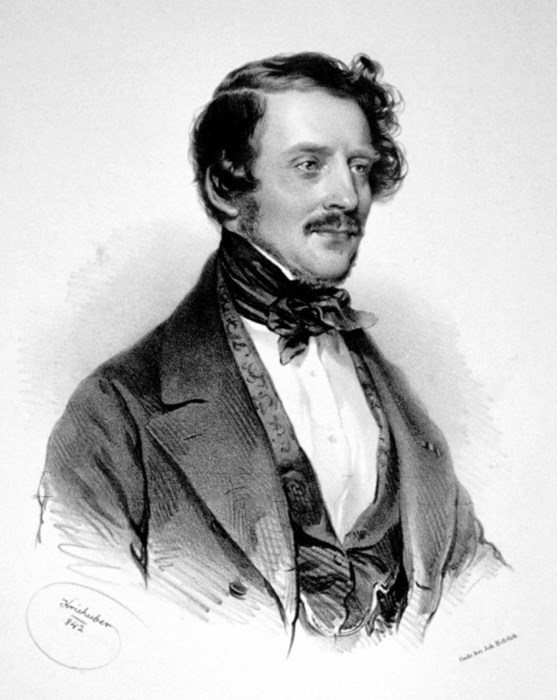 Between 1817 and 1821, Donizetti received several commissions from Paolo Zanca. His first staged opera was Enrico di Borgogna in 1818. He wrote several other works during this period, including chamber and church music as well as opera. It was the success of his fourth opera, Zoraide di Grenata, which caught the attention of Domenico Barbaia, the most important theater manager of his time. Barbaia offered Donizetti a contract. The young composer accepted it and moved to Naples, which was Barbaia's primary business location. For the next eight years Donizetti wrote works for Rome and Milan as well as Naples, with mixed success. It was not until 1830, with the performances of Anna Bolena in Milan, that Donizetti achieved international fame.

Donizetti was a prolific composer, writing both comic and serious operas as well as solo vocal music. Throughout his career he battled with the powerful Italian censors to put his works on stage. Two of his best-known comedies, L'elisir d'amore (1832) and Don Pasquale (1843), are considered masterpieces of comic opera and continue to hold their places in the standard performing repertoire. Perhaps his most famous serious opera is Lucia di Lammermoor(1835), although Anna Bolena has enjoyed considerable success in this century through the efforts of such artists as Maria Callas and Joan Sutherland. Donizetti was well acquainted with the greatest singers of his day, and he created many of the roles in his operas for their specific vocal talents.

As Donizetti's fame grew, he was able to accept of variety of engagements, writing operas for Paris as well as the famous opera houses of Italy. He relocated to Paris in 1838. It was there that he composed La fille du régimentrégiment in 1840, which is still frequently performed. Donizetti was also appointed music director for the Italian opera season at the Kärntnertortheater in Vienna, a position secured for him by Mirelli, the librettist for his early works.

Donizetti was a friendly and sincere man, supportive of fellow composers and other artists, and loyal to his long-time mentorMayr. Unfortunately, he endured great tragedy in his personal life. Donizetti had met his wife Virginia Vasselli while he was in Rome in the 1820's and married her in 1828. They had three children, none of whom survived. His parents died in the mid-1830s. A year after his parents' death, his wife succumbed to a cholera epidemic. Donizetti himself suffered from cerebro-spinal syphilis. Symptoms of his illness became evident as early as 1843; by 1845 his condition deteriorated to the point that he was institutionalized for almost a year and a half. His friend from Vienna, Baron Lannoy, interceded with Donizetti's nephew to have the composer moved to a Paris apartment where he could be cared for and receive visitors. Verdi came to see him there and was deeply saddened by his colleague's condition. Friends in Bergamo finally arranged for Donizetti to be brought back to his home town, where he stayed at Baroness Scotti's palace until his death in 1848.

Donizetti was reputed to have great facility and could compose very quickly. His favorite librettist was Salvadore Cammarano, with whom he first collaborated on Lucia di Lammermoor. Donizetti often assisted in writing the librettos for his operas. He completed 65 operas during his career; L'elisir d'amore, Don Pasquale, and Lucia di Lammermoor are generally considered the outstanding examples of his work. His compositional style proved influential for future Italian opera composers, most notably Verdi.

Production from The Santa Fe Opera