× Support Opera Philadelphia! Your gift will help us share opera now and in the future. Donate
Top Donate

“Some of Bernstein’s most potent late-period music. His talent remained gigantic to the end.”—The New Yorker

Composer, conductor, author, and music icon Leonard Bernstein is still fascinating audiences 100 years after his birth. Best known for creating cultural touchstones like West Side Story, On the Waterfront, and Candide, he called A Quiet Place “unlike any work I have ever written or seen.” The opera revisits the unhappy suburban family from Trouble in Tahiti thirty years later, only to find them reeling in the wake of tragedy. Unhappy memories and long-buried resentments surface, and the survivors have a choice: to hurt one another again—or to heal.

For evening performances: start your night at Volvér with their $35 Pre-Theater Menu! Discover the details here>>

Next in the series: Mahagonny: Ein Songspiel & The Medium (May 2018)

Approximately 100 minutes with no intermission

A Quiet Place is sponsored in part by David and Sandy Marshall, BNP Paribas, and the Allen R. and Judy Brick Freedman Venture Fund for Opera.

The Curtis Opera Theatre season is sponsored by the Horace W. Goldsmith Foundation and the Wyncote Foundation.

The voice of a generation 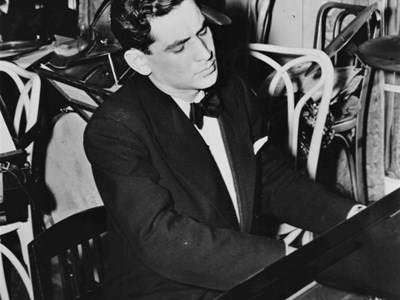 Leonard Bernstein (August 25, 1918- October 14, 1990) was a world-renowned conductor and composer, and one of classical music's icons of the 20th century. He was Music Director of the New York Philharmonic and conducted the world's major orchestras, leaving behind an enormous legacy of audio and video recordings. His books, as well as the much-beloved televised Young People's Concerts with the New York Philharmonic, established him as a leading educator. His orchestral and choral works include three symphonies (No. 1 "Jeremiah", No. 2 "Age of Anxiety", and No. 3 "Kaddish"), Serenade, Mass, Chichester Psalms, Songfest, Divertimento for Orchestra, Arias and Barcarolles, and Concerto for Orchestra. Bernstein's works for the Broadway stage include On the Town, Wonderful Town, Candide and the immensely popular West Side Story. In addition to the West Side Story collaboration, Mr. Bernstein worked with choreographer Jerome Robbins on three major ballets, Fancy Free, Facsimile and Dybbuk. Mr. Bernstein was the recipient of many honors, including eleven Emmy Awards, one Tony Award, the Lifetime Achievement Grammy Award, and the Kennedy Center Honors. Read more about Leonard Bernstein.

If you haven't watched BON APPETIT on https://t.co/PvYnsyQkZg, watch today! https://t.co/VboegmhNRO 2 days ago BON APPÉTIT! A Sweet Soirée is on the Opera Philadelphia Channel for one week, starting tonight! @jbartonmezzo star… https://t.co/eZHTJaG6lC 9 days ago