Born in 1960, George Benjamin began composing at the age of seven. From 1973 he had lessons with Peter Gellhorn, then in 1976 he entered the Paris Conservatoire to study with Messiaen, after which he worked with Alexander Goehr at King’s College Cambridge. Ringed by the Flat Horizon was played at the BBC Proms by the BBC SO under Mark Elder when Benjamin was just 20. The London Sinfonietta under Simon Rattle gave the premiere of At First Light two years later. Antara was commissioned for the 10th anniversary of the Pompidou Centre in 1987 and his Three Inventions written for the 75th Salzburg Festival in 1995. The LSO under Boulez gave the premiere of Palimpsests in 2002 to mark the opening of ‘By George’, a season-long portrait at the Barbican which also included the first performance of Shadowlines under the fingers of its dedicatee Pierre-Laurent Aimard. Recent years have seen further retrospectives of his work in Lucerne, Aldeburgh, San Francisco, Ojai, Frankfurt, New York, Toronto and Dortmund.

Benjamin’s first operatic work, Into the Little Hill, written with playwright Martin Crimp, was commissioned by the 2006 Festival d’Automne in Paris. Its London premiere was given in the Linbury Studio Theatre at the Royal Opera House in 2009, in a new production by The Opera Group, directed by John Fulljames, with the London Sinfonietta under the composer’s baton. Benjamin and Crimp’s second collaboration, Written on Skin, had its premiere at the Aix-en-Provence Festival in July 2012 directed by Katie Mitchell, and since then has been scheduled by eighteen international opera houses.

Approximately one hour and 35 minutes with no intermission 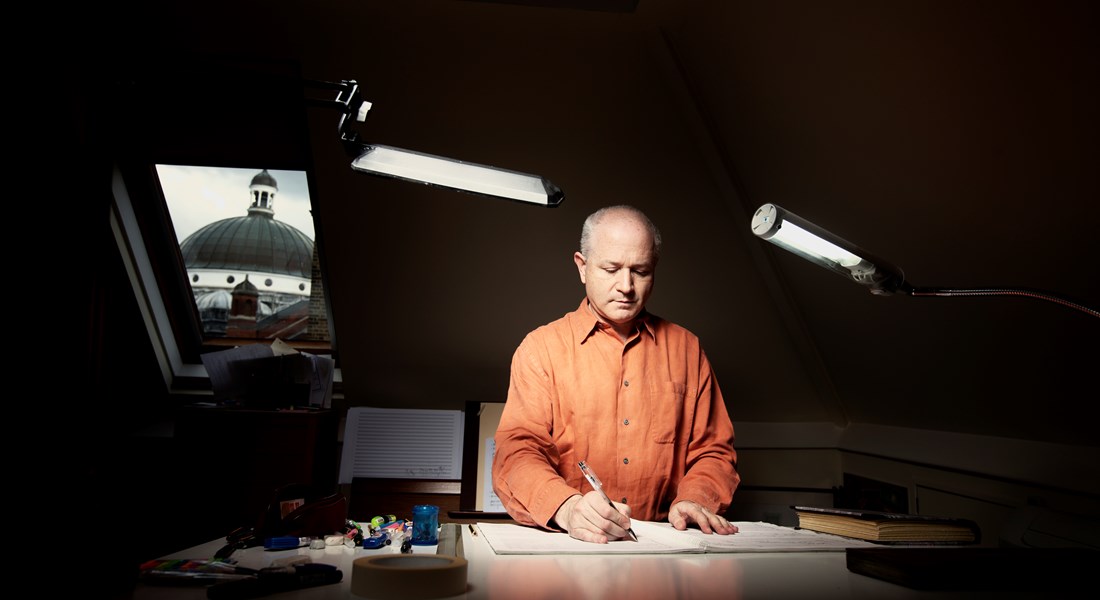 In 2012 the Southbank Centre presented a retrospective of George Benjamin’s work as part of the UK’s Cultural Olympiad. An honorary fellow of the Guildhall, the Royal Academy and the Royal College of Music as well as King’s College Cambridge, he was awarded a CBE in 2010 and is an Honorary Member of the Royal Philharmonic Society and a Commandeur dans l’ordre des Arts et des Lettres.Since 2001 he has been the Henry Purcell Professor of Composition at King’s College London. His works are published by Faber Music and are recorded on Nimbus Records.