Verdi's Requiem: The Story in the Music

The cellos exhale a hushed, sorrowful groan like someone’s last breath. It’s a sound so quiet, you’re not sure if the performance has started. The full orchestra begins to whisper as the chorus chants “Requiem aeternam” (Grant them eternal rest) devoutly. The men of the chorus declare that hymns will be sung to honor God, but the chorus returns to its reverent plea as the orchestra again mourns soulfully. Then, like a beam of light, the soloists enter, one by one, triumphant, astonished, and in adoration. The music is filled with grandeur as the chorus joins the soloists excitedly, as all continue their prayer “Kyrie eleison” (Have mercy upon us).

That’s the beginning of Giuseppe Verdi’s Messa da Requiem, a concert work for four soloists, a chorus of 100, and orchestra. While he was not a religious man, Verdi filled this work with emotional impact and religious fervor. 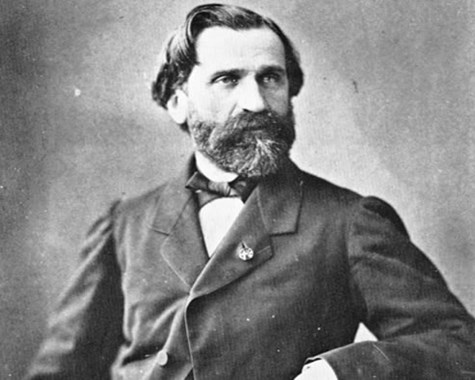 Before penning his own full requiem, Verdi organized the composition of a musical death mass in 1869 in honor of Gioachino Rossini. Twelve other now-obscure Italian composers each set a section of the text to honor the bel canto master. Due to logistical challenges, the Messa per Rossini was not premiered and feared lost until it was discovered in 1970 by musicologist David Rosen. The premiere of this requiem waited until 1988.

The Messa per Rossini is notable as Verdi composed the final section, "Libera Me," which he incorporated and revised for his 1874 Messa da Requiem, the piece you will hear today. Verdi was reluctant to write a requiem mass but reversed his opinion upon the death of one of his favorite writers, Alessandra Manzoni, the author of the classic historical novel, I promessi sposi. Believed to be the most widely read novel in the Italian language, it is said to have helped unify the Italian language from dialects within the various Italian states. Verdi felt that, much like Rossini, Manzoni deserved to be memorialized for the significance of his contributions to Italian culture.

Requiem’s text comes from the Roman Catholic liturgy and is a Mass to honor those who have died. Composers throughout the centuries have turned to this sacred text as a source of inspiration. Most musical settings of the requiem use the text in some fashion, some verbatim and others incorporating other texts to make a statement on death, the afterlife, nationalism, or politics. Many requiems from the past 200 years use orchestra, chorus, and soloists to bring the text to musical life.

It’s no wonder that the dramatic text has been a popular choice for composers to set to music. There are limitless possibilities to explore both the heights of salvation and depths of damnation. Verdi's Messa da Requiem is almost the opposite of an opera, which has various characters, a plot, sets, and costumes. There are no characters or conflicts needing resolution. The Requiem pulls us in and then holds our attention even without any staging, costumes, or even characters. Verdi does tell a story, with some of the most operatic music ever written. He examines various stages of mourning as our “protagonists,” consisting of soloists, chorus, and orchestra, move through various emotional states – solemnity, grief, fear, anger, guilt, anxiety, loneliness, denial, desire for salvation, and acceptance.Verdi’s drama unfolds musically and keeps attendees engaged through the very end.

Perhaps the most dramatic moment comes in the last 15 minutes when the soprano has a full operatic scena. The audience lays witness to her internal conflict as she works through her emotions, almost in conversation with a choir filled with celestial angels, purgatorial souls, and full orchestra.

The soprano begins rather desperately, almost angrily demanding that she be rescued from eternal death. By the very end, she has peacefully resigned herself to her own fate. Throughout this final movement of the Requiem, we hear the gamut of emotions: anger, fear, penitence, and piousness. In the end she almost welcomes her own death chanting in the musical purity of the key of C major. The movement is as emotionally exhausting for the audience as it is for the singers. The orchestra, chorus, and singers tell a story filled with whirlwind emotions moving through profound loss, terror, and anger, and ending with a sense of eternal peace – that begins and ends in the same tranquility. While it’s not a typical operatic plot with conflict and resolution, we still have been part of a story all told through music.

Michael Bolton is the Vice-President of Community Initiatives at Opera Philadelphia.

This essay appears in the performance program for Verdi's Requiem, January 31 & February 2, 2020.