Oedipus Rex, Fate, and the Chorus

Oedipus Rex is about the inevitability of fate; the characters hope to escape their tragic ends, but their very actions bring those ends closer. Oedipus Rex does not build its sense of drama through surprise, but rather through the tragedy of watching the characters careen toward their foregone conclusions. It is thus fitting to begin with a short synopsis full of spoilers.

The story begins with the city of Thebes in the throes of a plague. The elders cry out to King Oedipus for help, certain he can rid the city of the plague. Suddenly, his brother-in-law Créon appears with news: the oracle has decreed that the plague can only be eradicated once the murderer of Laius – the former King of Thebes, and former husband of Oedipus’s wife Jocaste – is found and banished. Before Oedipus can begin his search for the killer, the prophet Tiresius proclaims that Oedipus himself killed Laius! Shaken, Oedipus accuses Tiresius of treason, but Jocaste tries to soothe her husband, reminding him that oracles and prophets don’t always tell the truth. After all, oracles had predicted that Laius would be killed by his son, but he was instead killed by a stranger at the crossroads. This reassurance backfires when Oedipus admits that he himself killed someone at a crossroads while on his way to Thebes years before. Fate closes in as Oedipus’s true lineage is revealed – He is the son of Laius and Jocaste. The denouement unravels quickly: Jocaste kills herself, and Oedipus, finding his wife (and mother) dead by her own hand, blinds himself with her pin. Oedipus the King has fallen.

Stravinsky’s music for Oedipus Rex intensifies the plot’s main theme of fate, especially through the creative use of a male chorus. Stravinsky was inspired by his source material, Sophocles’ Oedipus Rex, which was first performed in or around the year 429 B.C.E. Sophocles’ tragedy, like most pieces of Greek theater of the time, contained what we now know as a “Greek chorus.” Aristotle, in his Poetics (c. 335 B.C.E.), advised playwrights to “handle the chorus as one of the actors; it should be part of the whole and should contribute to the performance….” In other words, the chorus should not merely entertain or distract the audience. Instead, the chorus should contribute to the plot and enhance the drama.

Jessye Norman with the chorus in Oedipus Rex at the Opera Company of Philadelphia in 1982. 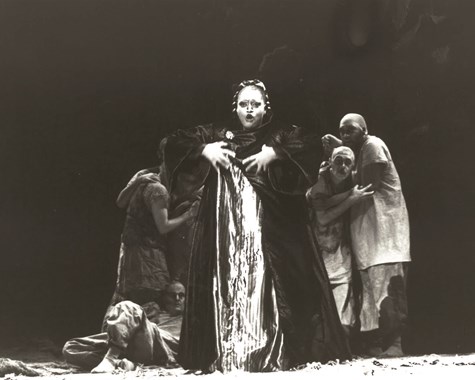 The chorus in Oedipus Rex comprises the male elders of Thebes. Embedded in the community, they serve as a powerful indicator for how we, the audience, should react to the tragic events as they unfold. Stravinsky recalled that even in his initial conception of Oedipus Rex, the chorus was essential. He writes, “I saw the chorus first, seated in a single row across the stage and reaching from end to end of the proscenium … My first and strongest conviction was that the chorus should not have a face.”

But the “faceless” chorus still has the capacity to take on many different faces and voices. Sometimes the chorus participates in the action, as in the opera-oratorio’s first scene, in which the elders of Thebes call to Oedipus for help, alternately demanding (with strong rhythms and loud brass) and begging (sweetly, with string accompaniment). The chorus also comments on the action from a distance, as when it obsessively repeats the key word “trivium”– “crossroads” – as Jocaste insists that oracles lie. In the end, the chorus narrates the downfall of Jocaste and Oedipus, describing the violence taking place offstage.

The chorus always seems to know things it shouldn’t. If it is made up of ordinary elders of Thebes suffering from the plague, how do these men know that the crossroads are important? How do they happen to observe Jocaste’s death and Oedipus’s blinding? They seem to know they opera’s end as well as we do from the start, but they still must bear witness to the tragedy’s unfolding.

Oracles, prophets, the chorus, and even we the audience know what will happen. Does this make Oedipus Rex boring? On the contrary: we are embroiled in the drama of the story along with the elders of Thebes, powerless to avoid the tragedy. The crashing chords from the opera’s first chorus reappear in its final, coming full circle as Oedipus meets his preordained fate. This time, the horror they accompany is not the plague, but Oedipus himself.