Why did you update Rigoletto?

The problem with not updating Rigoletto is that a Renaissance-era codpiece-cloak-and-hose setting in a fictional court of Mantua lets the licentious Duke off the hook for his appalling treatment of women. Verdi turned a famous philanderer into a rock star by giving him some of the best music to the most misogynistic lines ever written (Act 1 “it’s this girl or that girl, they’re all the same to me…” and in Act 3 “women are unreliable…”). These are two of the most jaunty, charming, popular tunes in the entire operatic repertoire, with a bravado that’s guaranteed to win the audience over. Even contemporary audiences in a post-#MeToo world, who can’t help but gasp at his shameless audacity and brazenness, adore those arias—which is what makes them so brilliant! I created this production for New Zealand Opera in 2012. I found inspiration for the spirit of this bad boy Duke of Mantua in Silvio Berlusconi, the former Italian Prime Minister, who at that time was breezing through his “bunga bunga” sex trial with his signature blend of political incorrectness, immaculate tailoring, and dazzling—if cosmetically enhanced—smile. Where better to set the debauched action of Rigoletto than the colorful, charismatic, spectacularly excessive “Berlusconi Court”? Even now that Silvio has retreated from public life his reputation is the stuff of legend. 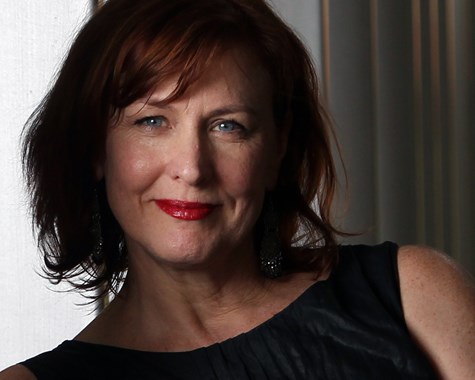 So, this interpretation isn’t about Donald Trump?

It’s not explicitly Trump’s America, or Berlusconi’s Italy, but a modern, highly recognizable version of the dystopian, brutal, corrupt society Victor Hugo and Verdi imagined as the background for the tragedy of Gilda and her father. The court’s treatment of Monterone, the heartbroken father of a girl whose reputation the Duke has publicly ruined, quickly descends from boredom to murder. Tired of the old man ranting, the Duke sentences him to death in a state-sanctioned execution. As a feminist and a fan of Verdi’s wonderful observation of human behavior, how could I resist bringing these worlds together in an imagined scenario where the excesses of obscene wealth, the corruption of high political power, and the moral void of the court all vibrate with an undercurrent of fear, violence, misogyny, and criminality? This is the world of Verdi’s Rigoletto, and our own.

"Sopranos must rehearse how to fall, be stabbed, brutalized, and thrown across the room, behaviors they would never accept in real life. In 2019, if opera aspires to be a progressive, future-focused art form with relevance in contemporary society, then it must evolve and be responsive to a changing society. The topic of sexual assault and violence against women in opera is right there in front of us, either to explore, or to ignore."

Why do you choose to explore sexual assault in the theater?

As we have seen in recent years, particularly through the #MeToo movement, sexual assault is an issue across society that women have been living with for centuries, and increasingly have decided to confront wholesale. My response is not only from the perspective of a feminist woman director, but from that of an average audience member (opera audiences are mostly women, as you know). For years, I’ve been frustrated that this art form has not called out sexual assault and violence, but often celebrated it. For example, Wikipedia says: “the Duke sings of a life of pleasure with as many women as possible,” and mentions that “he particularly enjoys cuckolding his courtiers.” In the most famous and beloved operas—Rigoletto, Don Giovanni, Carmen, Tosca, Madama Butterfly—the tragic heroine is part of the vernacular. Sopranos must rehearse how to fall, be stabbed, brutalized, and thrown across the room, behaviors they would never accept in real life. In 2019, if opera aspires to be a progressive, future-focused art form with relevance in contemporary society, then it must evolve and be responsive to a changing society. The topic of sexual assault and violence against women in opera is right there in front of us, either to explore, or to ignore. 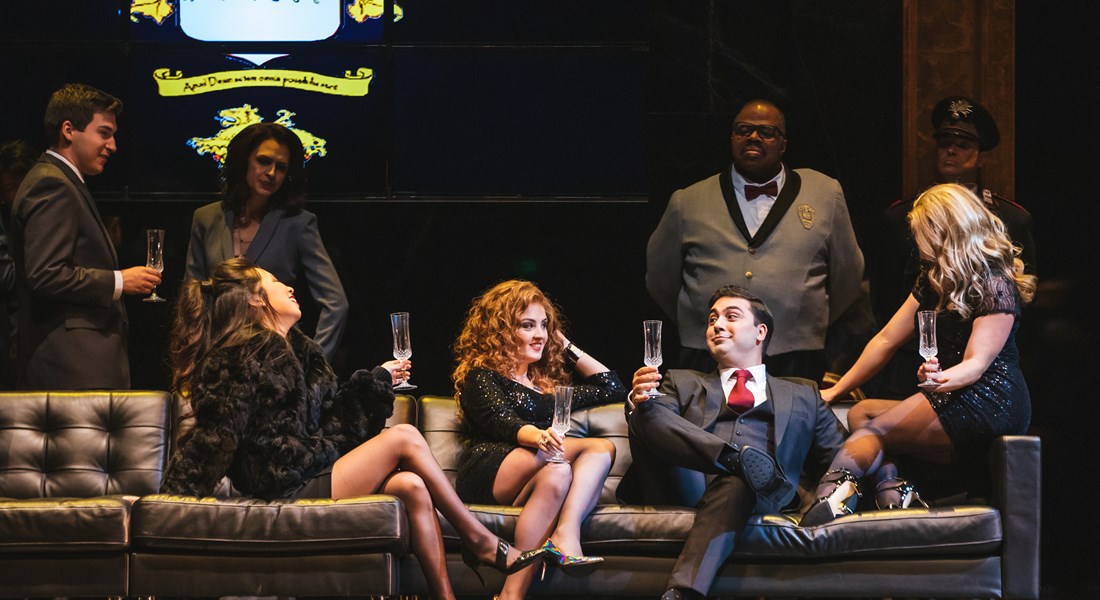 The Duke brags about his conquests with many women. Credit: Sunny Martini

How would you best describe the world of this story?

The word that best describes this world would be “heartless.” Victor Hugo and Verdi imagined a cold place where those with power own those without. To survive, the powerless must adopt high-risk survival strategies: the hired assassin Sparafucile and his sister Maddalena are in the sex and violence game, while as a servant with a physical deformity, Rigoletto has learned other skills. He’s a fast-talking comedian or joker who has cultivated a cruel wit and alliances with men he detests. He stays close to the Duke, whom he amuses in the manner of a performing dog. In public he is repulsive yet brilliant, but in private he is saddled with profound misery and self-loathing. His “deformity” is greater in his own mind than anywhere else.

Is there anything redeemable about Rigoletto?

There is something to admire in Rigoletto’s incisive and furious (if impotent) raging against the machinery of corrupt power. The men he works for disgust him, yet he is powerless to rebel, and he hates himself for it. Understandably, Rigoletto himself feels that the only thing that redeems him is his love for his daughter. Returning from the court to his home with Gilda, he describes himself as a vile creature, created so by both man and nature. Yet with Gilda he feels himself transformed. His daughter is a shining light in the darkness, representing for him the possibility of a better existence, reminding him of the love he once had with her mother, of a world untouched by the filth that surrounds him at court. It is far too great a moral load for a teenage girl to carry, of course. The fact that he seeks to protect her is admirable and born of love; but locking his daughter up and his obsessive secrecy are creepy, downright pathological behaviors. His love for his daughter makes him ferocious and fearless. Even though it’s ultimately futile, we can’t help but admire Rigoletto’s David-against-Goliath attempt to take down the Duke himself—hiring a hit man, arranging all the details, even planning his escape. Finally, his love for his daughter is expressed in the most heart-rending final scene imaginable. So yes, Rigoletto is both redeemed and abandoned by love.