There are certain operas in the repertoire that could be called “director’s operas”; The Love for Three Oranges is one of them.

This is not to imply that its musical aspect is lacking in any way; it is simply that the surreal nature of the plot and the dramaturgy allow for directors to give full expression to creative fantasy in a way that they are not able to with operas of a more realist nature like La bohème or Le Nozze di Figaro.

This same freedom, however, also presents the director with a challenge: In an opera where fantasy is the key element, the creative options are so many as to seem overwhelming. Where does one start? Is the opera simply a piece of absurdist nonsense, to be enjoyed as a fleeting divertissement, or does it contain deeper themes which deserve to be highlighted and explored?  The danger of the first approach, in my opinion, is visual excess, in which the production ends up being less than the sum of its parts because of the overloading of gratuitous effects and tricks. 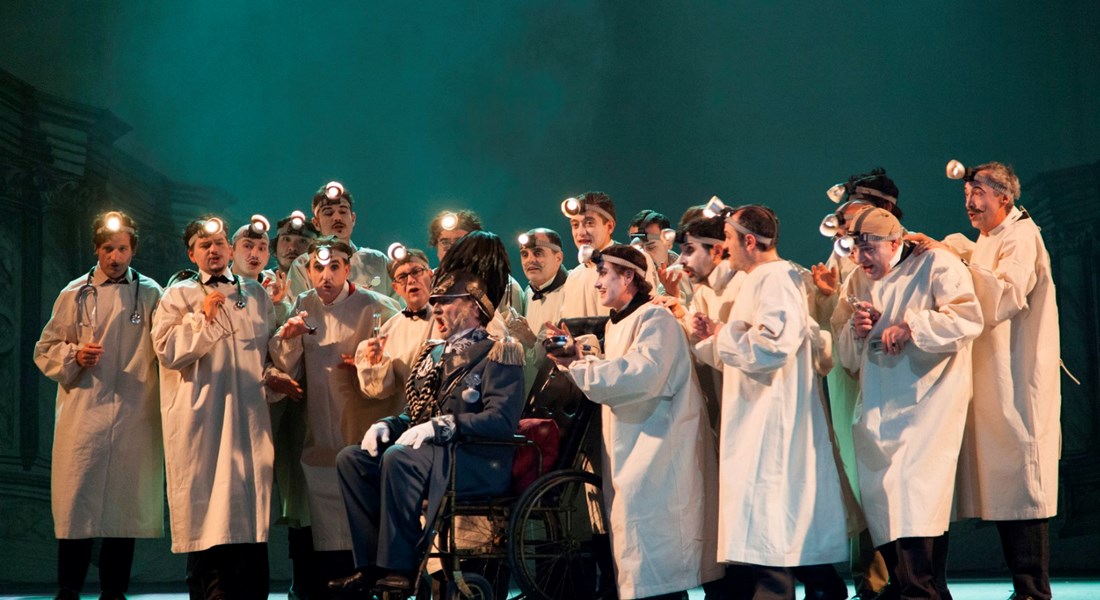 Beneath the fantastical plot and its seemingly random and absurd juxtapositions, lies what is known as a “quest” myth: similar legends include those of Apollo, Perseus and Siegfried, involving a young man embarking on a ‘rite of passage’ involving many dangers, with the goal of defeating evil (usually in the form of a monster), and often, of obtaining love. The hero undergoes a process of self-realization and self-awareness through hardship and sacrifice. The innate message of the myth is that only through contact with new, often seemingly dangerous forces, can an individual experience personal growth or maturation.

In choosing a ‘setting’ for this production, I was drawn to the fact that Prokofiev himself composed this opera at a critical juncture in his life. The world must have seemed a very turbulent and uncertain place. Imperial Russia had collapsed, and the newly industrialized and mechanized Europe was still engaged in a World War, the horrors of which were unsurpassed in their magnitude. Within this maelstrom of instability, revolutionary artistic ideas were pollinating. Prokofiev drafted his libretto (based on a translation by Meyerhold of Gozzi’s original) just after leaving Russia for the United States. America must have seemed like a land of great promise and potential, a place for growth, and like many of his famous Russian contemporaries (including Meyerhold) he was fascinated and disturbed by its great new contribution to the world of music: Jazz.

In my production I have therefore alluded to Prokofiev’s personal experiences and his outlook on the world in 1918, drawing parallels between certain characters in the opera and those that existed in the real world (Emperor Franz-Josef, Russian Prime Minister Kerensky, the Suffragettes). The juxtaposition of “serious” ideas and characters from the contemporary world with those from the world of commedia dell’arte and circus helps to emphasize the satirical nature of the opera. In line with the deeper readings of myths, the crucial role of Fata Morgana I have sought to convey as a catalyst of personal development, rather than as simply malevolent. The melancholic Prince, unable to find joy in a patriarchal European environment, is seeking for something new without even knowing it; the tired delights of his culture and tradition are dead to him. Only through contact with this Morgana, who I have bestowed with allusions to the future, the New World, America, and Jazz (and its spiritual links with the music and cultures of Africa) is the Prince able to grow into full self-realization. There are obvious parallels, too, between Prokofiev’s destiny and the state of Europe in general, both artistically and otherwise; exhausted by the First World War, the countries of Europe knew they had to turn outwards, to America and the New World, for spiritual and material rejuvenation.

This Director's Note appears in the O19 Festival Book.